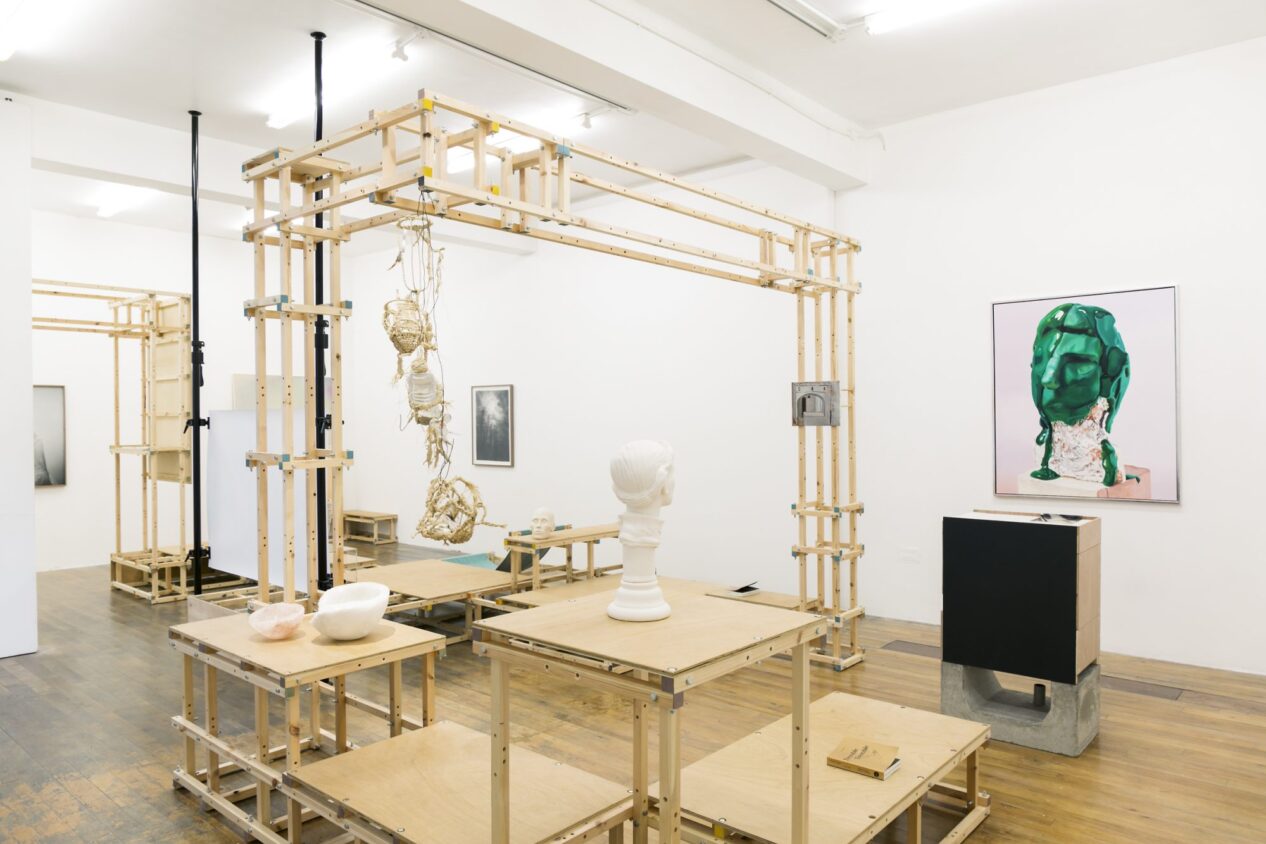 To write about the Periodical Review – an annual exhibition, now in its seventh iteration – is to repeat and confront the curatorial project’s own questions and provocations. Hosted, organised and partially curated by the not-for-profit artist-run space, Pallas Projects/Studios in Dublin, Periodical Review aims to enliven the practice of contemporary exhibition-making by reimaging the gallery space as a magazine. The exhibition title, in itself, echoes this publishing endeavour, suggesting something occurring at regular intervals. Periodical Review offers a unique opportunity to look back on the preceding year in Irish art, by showcasing artworks that have previously been exhibited nationally. Holding an annual survey of contemporary art is certainly a provocative proposition. A list of selected artworks immediately queries what isn’t present, what has been left out and by what authority?

The format has remained largely intact from the beginning. Working alongside Pallas Projects’ directors, Mark Cullen and Gavin Murphy, invited artists, writers or curators put together a selection of significant artworks exhibited on the island of Ireland during the previous 12 months. This review format calls to mind the Turner Prize – an annual survey of timely and significant moments or practices in contemporary art, within the geographical boundary of the UK. There are key distinctions, of course. At a basic level, the Turner Prize is framed around an individual award, while Periodical Review is a ‘review-styled’ group exhibition. More significant is the fundamental question of institutional weight. The Turner Prize was originally founded by a group of collectors in association with the Tate. Today, it is a monumental event, receiving major corporate sponsorship, celebrity endorsement and widespread coverage in the mainstream media. In contrast, Periodical Review is a grassroots and artist-led initiative, but they share an archival ambition, to remember to reflect on what came before. In an art world captivated by the next up-and-coming artist, commercial gallery trends, or ever-expanding auction records, the desire to reflect upon what mattered and why, during a given timeframe, is both critically challenging and wildly nourishing.

Periodical Review began on 19 September in 2011. From the outset, the core idea of reimaging the gallery space as a magazine was present, with subsequent exhibitions rarely deviating from this original format. Explaining how the process works, Gavin Murphy stated: “We have an initial meeting with selectors early in the year to discuss the parameters and structure, and again around September for the editorial meeting. Generally, each selector suggests approximately seven possible artists who are discussed and decided upon. Often there are instances where an artist is proposed by more than one selector.” In terms of the rationale for what gets selected, and the motivations and limitations surrounding an end-of-year review, Murphy added: “the space provided [in magazines] is always too brief to allow for anything meaningful; you might get one image per writer, so they always fall short. That fed into the structure of Periodical Review – multiple selectors choosing a number of artists or projects, writing a short accompanying text, but also showing the actual work. That’s partly why it’s described as ‘not a group exhibition per se’. Selectors talk about works as much as showing them, with the works intended to act as ‘texts’ as much as artworks. In that sense, documentation or publications have been included alongside artworks in the exhibition, as opposed to being auxiliary elements.”

Periodical Review #1 and PR#2 took place in the Pallas gallery space, while an offsite project was developed at John Fallon’s bar for PR#3. It wasn’t until PR#4 that the exhibition expanded beyond Dublin, initially taking place in Pallas, before being reshaped for a second iteration in Ormston House, Limerick. For the fifth edition in 2015, the exhibition expanded across multiple spaces, occupying both Pallas and the NCAD gallery. The funding behind the project has had a similarly varied history, receiving support from the Arts Council and Dublin City Council at times, as well as self-funding, crowdfunding and an auction, with proceeds from the sale of artworks helping to support both Pallas and the artists involved. It was during the sixth iteration in 2016 that Periodical Review truly began to flex the weight of its ambition. Coinciding with the twentieth anniversary of Pallas Projects/Studios, the PR#6 survey extended beyond the usual 12 months to encompass the previous 20 years. Pallas co-directors Mark Cullen and Gavin Murphy weren’t as directly involved with the selection as they had been previously. Instead, Brian Duggan, Sarah Glennie, Jenny Haughton and Declan Long took the lead. Explaining the reasoning behind this, Gavin Murphy said: “In that instance we decided that our input would be to invite four selectors who we thought had made important contributions within different fields of the Irish visual arts over the previous 20-year-period, concurring with the timespan of Pallas.” Discussing the line-up for PR#6, Aidan Dunne wrote that the selection “encompasses a broad range of projects and history with some ingenuity”.1 Both PR#6 and PR#7 were covered in Frieze magazine, suggesting that the project’s dynamism continues to draw considerable critical attention.

Periodical Review is clearly growing each year, in terms of venues, critical reach and reception. PR#7 was selected by the collaborative duo RGKSKSRG (Rachel Gilbourne and Kate Strain) – the first occasion that a curatorial collective has contributed to Periodical Review. This recent history lends momentum to the project, while also highlighting a demand for upcoming iterations to continue to expand upon and evolve the format.

Periodical Review is difficult to separate from the history of Pallas itself, or from some of their other major projects to date. Founded in 1996, Pallas Projects/Studios is like so many other independent artist-led spaces across Ireland – perpetually shaped by ‘crisis’ and perceived gaps in the cultural infrastructure. A recent project from Pallas is their major publication, Artist-Run Europe: Practice/Projects/Spaces, which looks at the conditions, organisational models, and role of artist-led practice within contemporary art and society. Murphy articulates a recent history of artist-led practice in Dublin, beginning with a wave of activity in the late 60s, a recognition of the need for greater infrastructure in the 80s, followed by a surge in activity in the 90s and 2000s, by artists who chose to remain in the country, due to improving economic conditions. Periodical Review is deeply embedded in the trajectory of artistic practice and in the fluctuating infrastructure of recent decades. Just as independent projects and artist-led activity filled in the infrastructural gaps, Periodical Review established something of a rival critical platform, as a counter to other institutional frameworks. By reflecting upon the Irish arts ecosystem, Periodical Review, like Artist-Run Europe, probes the legacy and the archival contributions of Irish art practice. During the seven years to date of Periodical Review, the selectors and artists involved have offered vibrant insights into contemporary practice, both emerging and established. Looking back over previous exhibitions, many of the names will be familiar, as these artists have since developedtheir practice substantially over the years. The exhibitions where artworks were originally shown, also provide another archive of contemporary Irish practice, bringing numerous galleries, curators and periods into this conversation. Establishing this expansive network is a noble legacy, but it is also daring and audacious due to the necessity of its partisanship. Crucially, Murphy explains, “Periodical Review was never intended to be a ‘best of’ yearly honour roll, or some kind of resolution of things, but a collaborative dialogue, an active discussion of where things stand now”. Faced with the enormity of 12 months of activity across the entire island, each selection committee is forced to make choices based on the practical limitations of the gallery. In doing so, each iteration of Periodical Review has a charged and dynamic energy that continues to elaborate upon its growing legacy.

Chris Hayes is an art critic based in London and Assistant Editor at CIRCA Art Magazine.