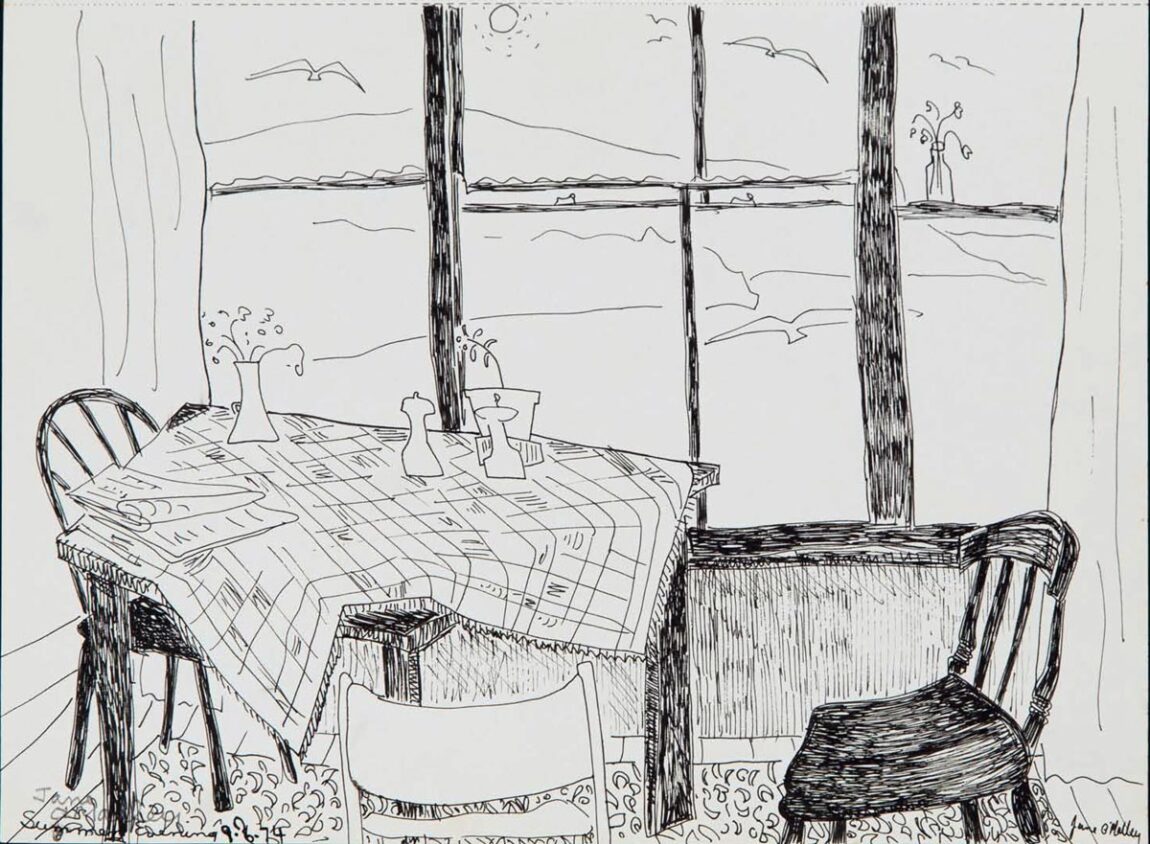 Does a ‘feminine aesthetic’ exist? It’s a divisive hypothesis (and a possibly unanswerable question) that came to mind upon viewing Jane O’Malley’s exhibition, ‘Black & White’, at the Butler Gallery. The fifty pieces shown included several etchings and aquatint prints, as well as sketches in an array of media, including chalk, Conté crayon, pastel, oil, pen and ink. As the title implies, this body of work is monochromatic, although a couple of pieces display slight intrusions of yellow. O’Malley’s ease with her wide range of media is immediately apparent. Lines are loose, fluid and used sparingly but effectively. There is a pleasing juxtaposition of sparse details – a simple outline suffices to suggest a jug, a straw, a bowl of cherries – with repetition used to add substance and pattern, as in the fields and flora of her Chinese brush drawings. O’Malley also has numerous techniques in her repertoire; these include uninterrupted fine line, scratching and removing marks. In At Michael Joe’s with Bob Quinn the Dog, 1984, she achieves an extraordinary luminosity in her rendering of the pots, bottles and jugs, through a combination of such techniques. Landscape provides the subject matter for some of the works, which presents something of a conundrum. The lack of colour makes it difficult to identify aspects we tend to associate with landscapes – the season, the time of day, the weather – although, in Isla Graciosa, 1996, O’Malley effectively manages to create the impression of wind and movement through the use of angular lines. However, it is hard to perceive what these pieces are ‘about’. Is this due to a failure on the part of the artist, or a result of the viewer’s preconceived notions? A further disappointment in these pieces is the cartoonish rendering of sheep, an instance where O’Malley’s sureness of line seems to falter. On the other hand, her more narrative works demonstrate a confident, even cavalier, treatment of perspective. Only someone who has honed their drawing technique over many years can break the rules as joyfully as she does.

A number of pieces tenderly feature her late husband (the artist Tony O’Malley) as subject: at work, rest, or engaged in household chores. Others depict domestic interiors, rendered very simply, often with doors or windows opening onto a lush world of vegetation, with birds being a regular feature. The contrast between the pared-back interiors and the detailed exteriors is intriguing and poses questions about the artist’s perception of her world. Does she feel herself to be constrained within a sparse domestic environment, compelled to look out onto a richer, more substantive world? Or is this what it is to be female? O’Malley’s work is not thematically or theoretically challenging. The subject matter is domestic, comprising depictions of her husband, home and environment. For the most part, the artist evades the viewer, visible in only one self-portrait, as she draws the image she sees in the mirror. But even here she presents herself at a remove from the viewer, choosing to be described just as “self”.

‘Black & White’ is not presented as a body of finished work, but as a series of drawings taken from O’Malley’s sketchbooks and notebooks over nearly forty years. It is therefore not reasonable to ask of them what they were never intended to provide. These pieces ably demonstrate the importance of drawing and of drawing regularly as part of art practice. They offer a comprehensive checklist of media and technique, without a dependence on colour. But by being placed on public view, they are contextualised as artworks. In this context, I wonder what they are telling us about women and art. Is it still possible, desirable or acceptable to talk about a ‘feminine aesthetic’? O’Malley’s work is not about these issues and therefore cannot address them. But provoking them – well, that’s another matter.