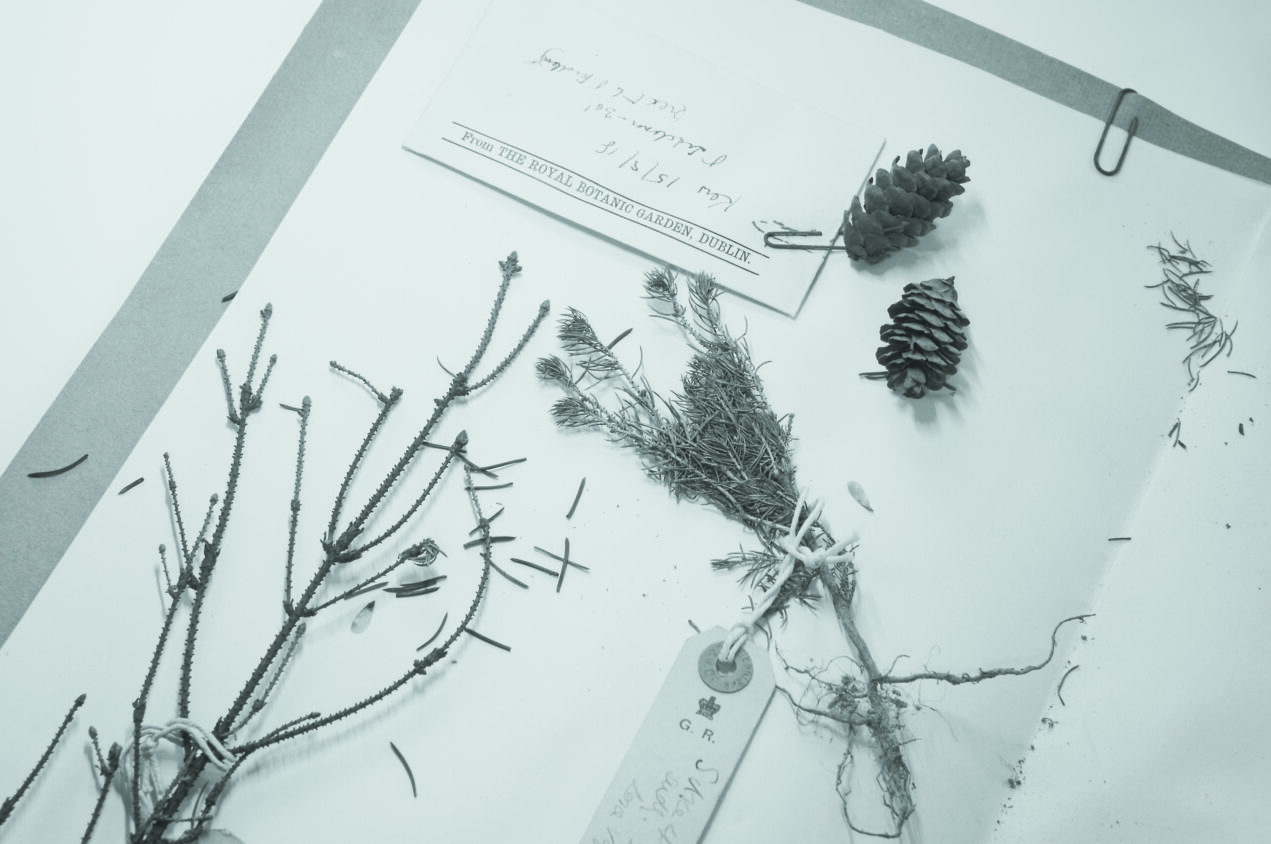 For the past year, I have been researching the history and practice of commercial forestry in Ireland. I’ve always been perplexed by the wealth of non-native coniferous trees across Ireland’s landscape and by the dwindling number of our native broad-leaf trees, such as oak, ash and beech. So I traced the roots of this matter (quite literally) back to the National Herbarium in Glasnevin. It is here that the Augustine Henry Collection is housed: an archive of thousands upon thousands of tree samples, including leaves, twigs, seeds, cones and roots, all meticulously boxed, labelled and archived.

Over the course of eight site visitsin early 2015, which were kindly facilitated by the director, Dr. Matthew Jebb, and the brilliant research botanist Dr. Noeleen Smyth, I began to discover that these samples serve as a blueprint both for Ireland’s landscape and for the forestry industry as we know it today. I rummaged through the archive, row after row, stack upon stack, not knowing what in particular I was looking for, until at last it was staring me in the face. A manila folder with some crushed twigs and cones inside. Sent to Ireland from Alaska in 1919 and labelled “On His Majesty’s Service”, it contained Picea sitchensis, more commonly known as the Sitka spruce, the conifer tree most predominant in Ireland. I found these samples fascinating and spent a lot of time photographing this entry and many others like it.

I then shifted my focus from the archive to the landscape and began recognising these trees in every county in the country: Wicklow, Dublin, Kildare, Meath, Laois, Kerry, Donegal, Galway. I became almost obsessed and photographed them at every opportunity. It was through this creative engagement with the forests that I started to understand them as a type of architecture. I noticed that they have boundaries and borders, corridors and footpaths, elements that I would normally associate with a city or a built environment. I knew that I had to spend as much time in these forests as possible.

While I was researching, I heard about the call for applications to ARTfarm, a rural residency programme in County Galway funded by Galway County Council Arts Office. Nestled away behind a town called Newbridge (not the one that’s famous for silver cutlery), ARTfarm comprises a beautiful stone cottage, a separate open-plan studio and a few acres of land. The location itself is heavily forested for commercial use and serves as a perfect example of how Picea sitchensis has taken over the landscape of Ireland.

The application process itself was quite swift. I saw a call for proposals on the VAI website and rang the arts office for some more information. I felt as though my current research was very much in sync with what was being offered, and I hoped that they would see this. Within a week, I received a call from Galway congratulating me on my successful application and putting me in contact with Sheila, who runs the residency.

As I approached ARTfarm, the many road signs pointing in different directions towards a town called Creggs disorientated me. I later discovered that all roads lead to Creggs. Even later, I found out that there are no road signs pointing out of Creggs. I pulled over and rang Sheila to ask for directions. Within five minutes she had come to get me from the side of the road, and my residency had begun.

Pulling into the driveway of ARTfarm is something I will never forget. I was presented with a brilliant confusion of plants, flowers and sculptures. I even caught sight of a giant Chinese dragon tucked away in an open shed, waiting for a parade worthy of its presence. The next few hours were spent conversing with Sheila over pots of tea and coffee. She told me that her dream for ARTfarm is that it would give artists the opportunity for creative exploration in a peaceful and quiet environment. If in some way ARTfarm could help towards furthering their work, then all the better.

Later that afternoon, we took a drive around the neighbourhood and seldom passed a house. I took in forest after forest. My trees were everywhere, and I was right where I needed to be. Over the next couple of weeks, the forests that were so new to me would become familiar. Each one developed its own significance and relevance to my work. Every morning I set out with my camera and tripod, photographing new forests and revisiting others. I spent hours walking though the densely populated coniferous forests, which were so dense that each tree had but a few needles at the top of its trunk, as the light could not penetrate deeply enough to sustain the lower branches.

About a week into my residency at ARTfarm, Sheila took me to a different forest, one that I would never have discovered on my own: the ‘forest of many names’, as I jokingly call it; or Castlekelly, Aghrane or Old Forest, as the locals call it. Here, amongst the various firs, pines and spruce trees, lay the remains of ancient oaks: stumps of trees that were felled by people long gone. Most of the oaks were dead, though some were miraculously still growing a branch or two.

It is difficult for me to describe the reaction that I had to this place, but after multiple visits I began to realise that, as a non-religious person, it was the closest thing to a religious experience that I’ve ever had. These relics stood as monuments or even sentries. My work slowly took a tangential path, and I began documenting these stumps each day, returning to see how the light fell on them at different times. Mid-afternoon was my favourite time to photograph them, as the sun was high enough to briefly penetrate through the surrounding conifers and illuminate the clearing in which the stumps remain. I have not been back to this forest since completing the residency, but a return visit is high on my list of priorities.

Through my involvement with the various trees and forests, I built up a sense of the rural environment in which I was living. The community and local towns that at first seemed so sparse and spread out started to seem more tightly knit and connected. Although we were technically in County Galway, I came to learn that the locals read the Roscommon newspapers and tune their radios to Roscommon stations. There is a fine line between Galway and Roscommon, and it lies 11.7km away from the border in Ballygar.

Through Sheila’s feverous work within the community, I began to see the importance of art and of creative hubs in rural contexts. Sheila has fostered a sense of creative opportunity within the town of Ballygar, where the local residents have recently restored a beautiful old courthouse. It is now used for recitals, exhibitions and events. On Culture Night, the place was truly buzzing with people who had come from miles around to participate or to spectate in the events. Afterwards, we went to the local pub, The Thatch. It served the best Guinness I’ve ever had, and I was amused when I got a euro change from a fiver.

My time at ARTfarm came to an all-too-sudden end. It felt as though I was still unpacking my things when the day came to pack them all up again. My last weekend was spent paying final visits to familiar forests, having one last cup of tea with Sheila and saying farewells. On my way back to Dublin, I passed three more signs for Creggs and finally decided to turn on my satnav.