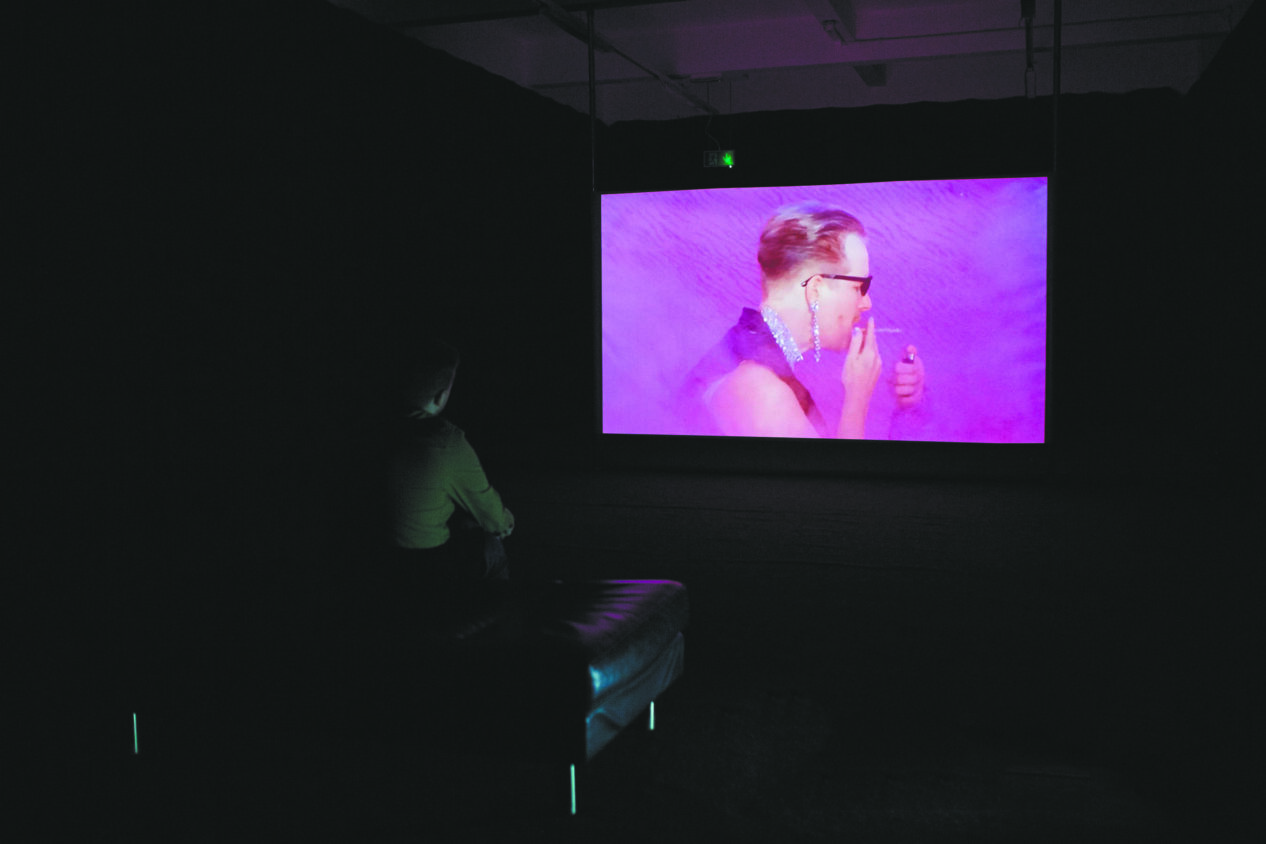 In ‘She Devil’, two video projection screens fill the huge darkened warehouse space of Golden Thread’s Galleries One and Two. This doesn’t mean, however, that there are a small number of artworks on show. Between them, these two screens play a continuous loop of 15 video works. The ‘She Devil’ project has been presented, with different content but in a similar format, in Rome and Bucharest.

For the 15 artists featured there are a dizzying number of curators involved – 19 in fact – arranged in a complex hierarchy. In Gallery One, Golden Thread’s own Peter Richards has selected Northern Irish/Irish curators from an array of art institutions (Queen’s Film Theatre, Digital Arts Studios, Golden Thread, IMMA, Millennium Court and CCA Derry-Londonderry), who have each selected a work by a female video artist. In Gallery Two, Richards has selected a further 11 video works by female artists from the pool of works selected by other curators for previous editions of ‘She Devil’. Italian curator Stefania Miscetti originally set all of this in motion and the format has led to a multi-authored enquiry into gender identity, both in Ireland and internationally.

The broad scope of work includes both documentation of performance art, video art and everything in between. Furthermore, the artists selected range from the emerging to the established, both Irish and international. On the Irish side of things Isabel Nolan, Daphne Wright and Sinead O’Donnell all feature. Nolan’s Sloganeering, in which the artist writes and scores out snappy self-referencing slogans on successive t-shirts that she wears and takes off, particularly stands out. Despite being made back in 2001, its presentation of female identity asserted through a sentence of text seems particularly relevant to our current social media culture. Another work that demands the viewer’s attention is Daphne Wright’s I Know What it’s Like, in which a deadpan unblinking elderly woman delivers intimate statements, on topics such as breastfeeding her child, straight to the camera. The unflinching facial expression and equally flat tone of the presenter’s voice contrast with the statements she is delivering. The effect is wholly captivating and makes for a wonderfully strange scripted performance.

By devolving the selection of artworks to so many curators, ‘She Devil’ explores the current critical discourse surrounding gender identity as represented by female artists working in film. In addition to this, knowingly or unknowingly, the show also questions the presence and importance of the curator in relation to the exhibition of artworks. On this point, there is an interesting conversation between the curatorial format of ‘She Devil’ and ‘G R O U P S H O W’, which runs simultaneously in Golden Thread’s Project Space. Both of these exhibitions can be read as presenting the function of the artwork as secondary to that of the curator, whose selections and decisions are presented as the primary narrative. Phillip McCrilly has curated a self-aware exhibition that questions the legitimacy of a group show in which a selection of artists are presented together, often with tedious connections. In this case the artists are the graduates of Golden Thread’s Career Enhancement Programme: Stuart Calvin, Christopher Campbell, Erin Hagan, Brónach McGuiness, Sinead McKeever, Paul Moore, Sharon Murphy, John Rainey and Michael Sheppard. McCrilly’s strong curatorial style, which in this exhibition includes artworks presented on free-standing metal shelving units, fluorescent tubing, a pot plant and retro television monitors, makes him a visible presence in the show, rather than a silent decision maker operating in the background. Given (and due to) the disparate practices of the artists involved, McCrilly’s heavy curatorial touch gives the show a confident and singular narrative, which feels necessary. In contrast, due to the sheer number of varied practices (both art and curatorial) presented in ‘She Devil’ the suggested singular narrative is less convincing.

‘She Devil’ does present some strong individual works, which convey something of the national and international discourse on gender identity being formed by female producers of video art. However, the discourse presented by the exhibition itself seems more focused on ideas around the role of the curator(s) in a visual art exhibition. This, of course, is a justifiable area of focus, and in fact proves very interesting when presented next to ‘G R O U P S H O W’, which explores similar themes. The two shows when viewed in tandem present a fascinating narrative on contemporary curation. But of the 44 curators and artists on display across the Golden Thread’s galleries it is in fact the small group show of emerging artists led confidently by an emerging curator staged in the project space that steals the limelight.

Iain Griffin is a visual artist and writer based in Belfast.