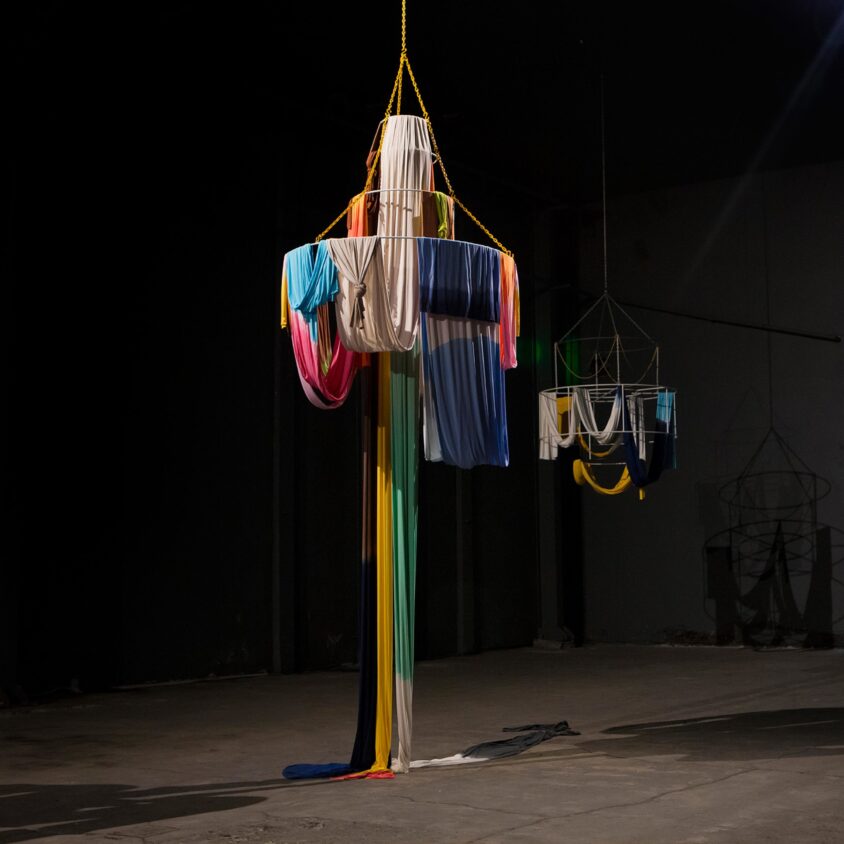 JANE FOGARTY AND ISABEL NOLAN DISCUSS SOME OF THE TECHNICAL AND CONCEPTUAL ASPECTS OF SCULPTURAL PRACTICE.

Jane Fogarty: Thank you for agreeing to this interview. As you know, after graduating from art college, I worked as your studio assistant for a number of years. This is a wonderful opportunity for me to more specifically discuss with you approaches to art, and sculpture in particular. Your sculptures often feel as if they are on the brink of collapse; yet they are created using industrial materials such as welded metals, modroc, glass and jesmonite. Frequently you finish the work with fabric or pastel colours which have the effect of softening the overall appearance. They are beautiful objects. What drives these aesthetic choices?

Isabel Nolan: Thanks to you also, Jane. Something that probably cuts across all of the work is that I like it to look and feel handmade – with visible brushstrokes, stitching, joints and so forth. When I’m trying to figure out how to make certain forms or images happen, special materials or technical ingenuity doesn’t appeal to me much, so works usually hover in the middle of a spectrum that has high finish at one end and found objects or ready-mades at the other. There is something about the tension of a thing that clearly is made as an artwork but is also trying to belong to the world in an ordinary way that I like a great deal. I suspect that is where the materials and the softening come in. Colour is seductive and transformative, and I think it changes the attitude, even the speed, of a work, whether it pops or withdraws. I want works to be available and pulling away, wrong and generous. In big picture terms, in the world at large, most things feel only temporarily coherent. The meaning or existence of anything is always on the verge of collapse. I want that mixture of familiarity and imminent disintegration to permeate the work.

JF: I’m thinking specifically of Turning Point (2010) in Dublin Airport T2 – when conceiving of this sculpture, how influential was the site on its scale?

IN: I think both the brief and the location required that scale. I had to push for the central location because I wanted the work to be in the midst of things, visibly if not actually ‘in the way’. It is, or certainly was at the time, the only non-functional thing in the airport and I wanted it to assert its purely aesthetic role, so it needed to be large, but not domineering. The colour changed during the realisation – originally it was to be a kind of odd lilac colour, but I realised it would disappear into the colour scheme of the terminal. In thinking about how you work with colour: on the one hand, you use pre-made coloured tissue papers to make the sculptural works, and on the other, you carefully mix egg tempera to paint with – I’m wondering where the control lies? It seems there is a nice tension between the precision and relinquishment of choice at play…

JF: Yes, I always set parameters when I begin making my work. The predetermined colour from tissue paper used in the sculptures was a way of having the form and surface continuous; the colour did not sit on top of a support – it was embedded within it. This resulted in sculptures with a friendly, pastel colour palette. I have relinquished control of the end result; a paradigm is established and must be followed through. For the egg tempera paintings, I create a very specific palette derived from colour swatches of the sculptures. The control is there, but in another way. This approach helps me when working in a wholly abstract way; it determines the framework which the artworks function in. Your work straddles figuration and abstraction. At what point do you determine which approach is most appropriate for an idea or new piece of work?

IN: I don’t know that I see a clear boundary between them. It is difficult to think of abstraction or figuration as distinct modes without invoking a set of artificial separations. What a work might be doing, how it comports itself or occupies space is more interesting to me than deciding whether a form I would like to exist – to see in the world – will be either abstract or figurative. I’m not at all sure I would know how to designate a lot of my works as one or the other – I tend to think in terms of actions. Something might be opening up, or shutting in on itself, breaking apart or coalescing. Likewise, work that stays slippery within conventions or subverts them quietly is the most interesting to me. No matter what approach you settle on, people generally want to find a reference for the work or make an analogy out of it… “It’s like a… it reminds me… it’s about…”

JF: That’s an interesting point; I think we strive to apply language and terms of reference to things or artworks. Really the terms abstraction and figuration are all about language. Do we have a word to describe what’s in front of us? I like the idea of work staying slippery within conventions. Finally, I was wondering, as we face into the new decade, what do you think is the potential for sculpture in Ireland?

IN: Bloody hell. That’s a tough question. Across every generation, there are a lot of terrific artists in and from Ireland making sculptural work – so in that sense, the potential is vast. I would love to see new studios open here: huge, adaptable spaces that could accommodate the production of very ambitious, large-scale projects. I’ve little interest in spectacle for the sake of it, but we are much too used to working in small rooms. Large studios would dramatically shift the capacities of artists here to work to their full potential. It would be very exciting to see what artists could do with superb facilities. And apart from the aesthetic/intellectual/social potential, there is a secondary sense that resource-rich artists can more easily garner curatorial (and commercial) attention that is harder to snag when you are working on three pieces simultaneously, rather than eleven or thirty. In the long term though, the appetite for that kind of work, or those ways of working look potentially untenable, or perhaps I mean increasingly inappropriate… It may be that the future for artistic activity is shaped in material terms by our collective consciousness of climate change. Dennis McNulty once posed a question during a panel discussion I was involved with, querying what it might mean to make sculpture on a small island. I think it’s a weird and interesting question to ponder and I wonder if it will become ever more relevant, as the era of cheap air travel possibly draws to a close. Is this a question that might inform your own work in any way, or more broadly, what you see as the potential for sculptural work in Ireland?

JF: I hadn’t considered the consequences of island living in relation to a sculptural practice until recently. Transporting objects abroad is costly and not environmentally friendly but I have similar concerns when producing objects full stop. I try and keep an eye towards an environmentally sound way of working but ultimately, I am adding more things to the world. Conversely, I don’t want to live in a world where certain kinds of art are no longer produced. Maybe these questions will shape the art of future generations and drive them towards new technologies and cross-disciplinary ways of working, while becoming ever more environmentally, politically and socially engaged. This may negate the need for mega-studios in Ireland, but I wonder if it would hamper our artistic potential and international presence? It will be interesting to see how it unfolds anyway.

Jane Fogarty is a Dublin-based artist working with sculpture and painting.