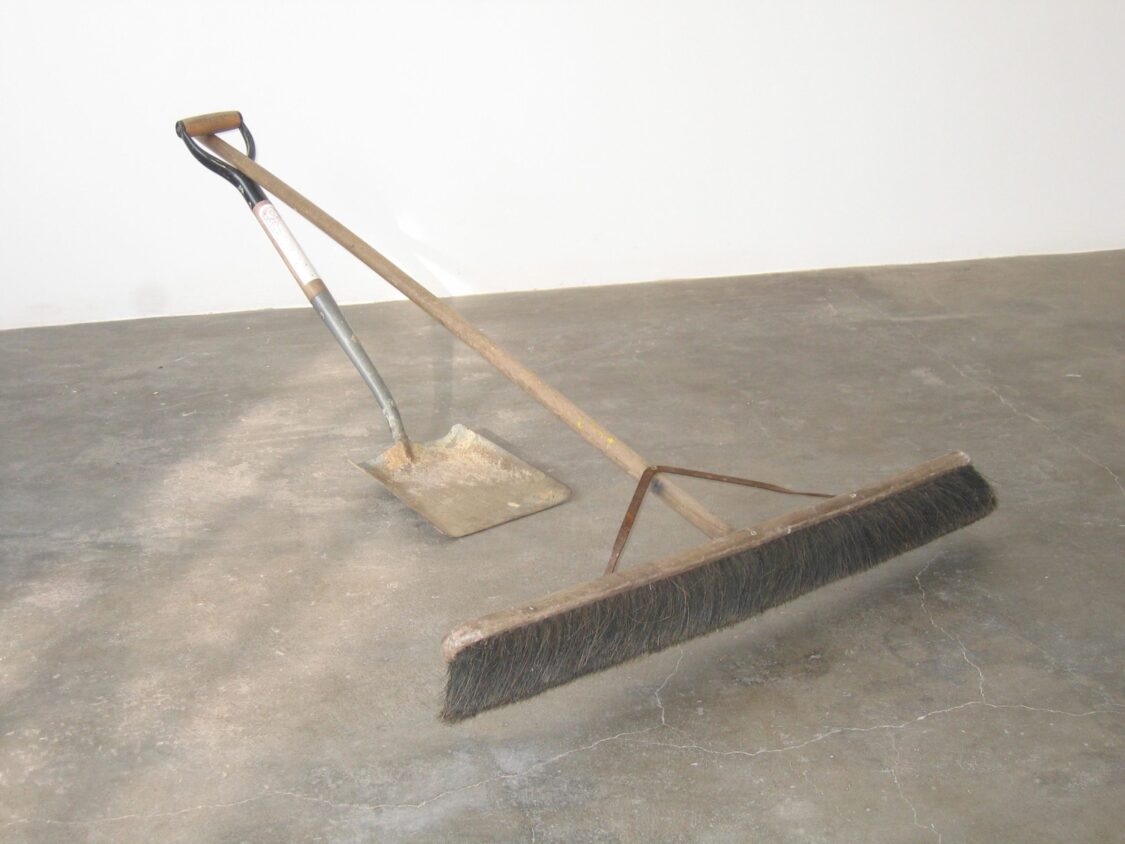 KATIE WATCHORN talks to MATT CALDERWOOD ABOUT THEIR SHARED BACKGROUNDS IN FARMING AND ART MAKING.

Katie Watchorn: You’re based in London, but are from Antrim – do you have a space in Antrim where you can make work?

Matt Calderwood: Yes, my family still have the farm where I grew up and while I’ve been living in London for 20 years or so, I spend quite a lot of time there and always consider it home. It has sometimes been the obvious location to make specific works, like, early on, there was a video work I wanted to make that involved firing a shotgun and, being a farmer, my dad owned one, so I was able to go and make that on the farm relatively easily. Later, in 2011, I was commissioned to make some new work which was going to be a film and sculpture. I decided to use the opportunity and to turn a brutalist looking concrete potato shed into a makeshift film studio. I’ve continued to use that space as a studio since, but whatever I’ve done in there, the biggest part of the project was always convincing my father it was a good idea for me to work there at all.

KW: I had a similar situation with a shed at home. The most important part of making that space was the interaction with somebody else, to actually renovate it. Which turned into the work, or the performance.

MC: Yes, for me too it was important to work with my dad to clean up the space and to put myself in a position where I had a place to work there that would allow me to be there more. I started to really think about making a new space from scratch; or making an ‘object’ that you could use the inside of. I was thinking about scale – the ever-expanding volumes of art and exhibition spaces. I started thinking how you could make quite a considerable sculptural object that is, at the same time, quite a modest building. These two things don’t have to be mutually exclusive and the messy notion of function can be an exciting difficulty to add into an artwork.

KW: I’m interested to hear about your family’s farming background. In my own upbringing, a distance was formed quite early on, which led me to establish my own relationship to the farm. Can you describe how, if at all, the farm may have impacted your work?

MC: When I was born, I would have been seen as a likely successor to the farm, so it’s like I had to create my own distance. But now, I spend a lot more time there and often think about the similarities between making art and farming. They are both ways of life more than careers. They both require self-reliance, ingenuity and buckets of optimism. What I’m working on now as an artist may not come to fruition for months or years and sometimes projects come to nothing. In the studio and on the farm, there are great rewards and sometimes dead losses – but, there’s this sense that anything is possible – being capable and self-sufficient is a really central theme to both.

KW: Do you think that growing up in that material heavy environment has informed what you’ve been drawn to?

MC: For the longest time I was doing the best I could to distance myself from those materials. The more I look at it now, I appreciate that these are the things I have inevitably been drawn to. When I think about materials like the rubber I’ve used in the past, to me it was industrial; there was an absence of hand-making in it. But when I think of it in a farming context, there’s so many things that also have that quality. When I’ve cast rubber, it was because I needed a resilient material that could be thrown around without getting damaged. It could also be inked up and used as printing blocks to make works on paper. I’ve used concrete for its mass and permanence and plasterboard for its vulnerability to damage. I am often choosing materials that will serve the idea and perform specific functions. On the other hand, I have used found materials, like discarded estate agent signs, to make functional objects like chairs. I have often used items found on site as components in ‘found object’ works. In this case the object dictates the form of the work, but the initial idea and site dictates the selection of object. When I’ve used performance, it’s mostly utilised as a document of an experiment – it has been particularly useful in capturing a deliberate failure or collapse of a system like a ‘found object’ work.

KW: With your balanced works, the patina of life and labour is still present in the objects, unlike the manufactured ones. What draws you to certain objects?

MC: I like the idea of taking used, functional objects that carry a record of their life’s work on their skin. For example, Some things just work (2004) was made around the heyday of reality TV. These two very ordinary, everyday objects, which had been living in a warehouse their entire life, were now free. They were like a celebrity broom and shovel that never had to work again. Some of the more precarious pieces came from being invited to be part of shows. I would travel to the gallery with nothing or, at least significantly less things than I would need to make the work, so that I knew the work had to be made with what I found on site. It kept a very live aspect to everything. Like on the farm, when a hole appears in a hedge, at that particular time, anything at hand that can fill it is the right thing. That could be a bale of hay, the bonnet of a car, a wooden pallet or a person. That sense of pressing things into duty due to requirement in a specific moment – I think there’s a creativity in that act and that choice. The objects I’m drawn to are usually unlikely candidates. They often echo the make do attitude I’ve witnessed on the farm. In the end, the thing doing the job is often really far removed from what you might expect to be there. There’s a natural pleasure in that.

Katie Watchorn is an artist from County Carlow. She is currently based in Fire Station Artists’ Studios (until 2022) and is working towards a solo show as part of Glasgow International 2020 (24 April – 10 May) in Studio Pavilion at House for an Art Lover, Glasgow.

Matt Calderwood is an artist from Northern Ireland living and working in London and County Antrim. He is represented by Anthony Wilkinson Gallery, London.
mattcalderwood.com