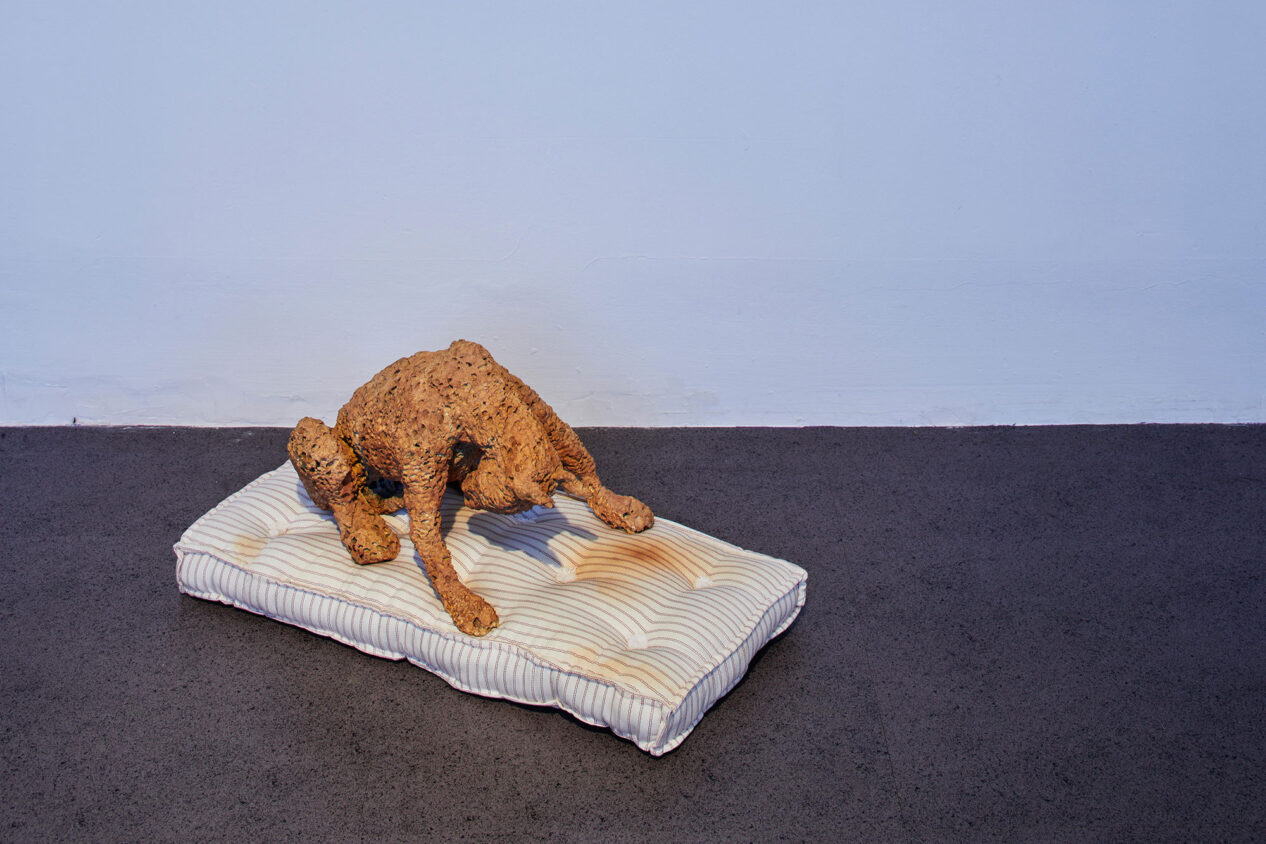 John Rainey: When I’ve experienced your sculptures in the past, there were distinct points of identification for me. There’s a combination of a visual language – signs and symbols that you seem to have developed over time – with a type of rendering that suggests a natural affinity with materials. What were your early experiences of working with materials?

Janet Mullarney: I think everybody works with their own signs and symbols to a lesser or greater degree; visual language is what we’re at. We’re communicating what we can’t communicate through verbal or written language, through what happens to be a material language. When it works, I think one can understand what we’re looking at, without necessarily fully understanding it logically. As a child I was given a lot of materials to work with. I was given paint and had my father’s workshop to mess around in, making puppets for myself. He loved wood – we had an old Georgian house and he worked on it a lot. He had great skill. I obviously had a lot of admiration for that and wanted to be admired by him.

JR: My father also has a wood workshop, where he built and made things for our house. I was always very aware of what he was doing. I also have very clear memories of sculpting puppet heads in clay at a young age.

JM: These things are very formative. Later, as a young artist, I won many Glen Abbey and Caltex competitions, which gave me money to escape Ireland when the time came. In Italy, I dropped out of art school very easily; it meant nothing to me – I was far too young for it, I think. Besides many odd jobs, I started working in furniture restoration. Learning to work with wood in that context was a type of training. I sort of ignored art making until a lot later. Restoration is the opposite of art making really – the less you are seen, the better restorer you are. I was very intent at that, but then I made a little figure one Sunday afternoon – I’ve still got it. It was the first time I thought of sculpture. It went on from there without any clear idea of what an artist was meant to be doing.

JR: I have a similar core training in ceramics, introducing other materials over time. I’m interested in the pluralistic approach you have with materials, which seems to be led by a sense of appropriateness in any given instance. Are there other factors that inform your material choices?

JM: I spent time in India early in my career. That was transformative for my use of materials. It came about at the right time, in the sense that I had been working very studiously with life-size figures in wood. It was a more real-life approach that I think actually got at me and irritated me. It wasn’t really what I was after, even though knowing how a body works is absolutely imperative, if you’re doing figurative work – even if you’re doing ‘bad’ figurative work, you have to know how the body works. India made me realise that you didn’t need a studio, objects, tools – you didn’t need anything. You’d come across stuff lying on the beach that you could use – bits of wire, little bits of plastic and cloth. It was a matter of hunting, searching around and finding things. Nearly everything was considered precious, so leftovers were few but intriguing. In terms of combining materials, my dancers with the big hemp skirts from the late 1980s are important; I think they were quite courageous. At that time, they would have been seen as very out of whack, but I didn’t care – of course I cared inside but I didn’t know I cared. Way back, I had seen Degas’ little dancer with her shaggy skirt, and she was extraordinary, like something that had been born thousands of years ago and would go on forever.

JR: Your sponge dogs are an interesting example too. Do people ever mistake what the materials are?

JR: There’s a question I have about intentionality and how work develops. How fully formed is an idea when you begin?

JM: With wood, it can take a bit of planning. You need to have an idea of what you’re doing. It’s much easier to surprise yourself in clay (or plaster or sponge or cardboard) – there, I’ve done things that I wasn’t expecting, certainly.

JR: It’s about clay usually being an additive process, whereas with wood it’s usually subtractive, so actions have to be more intentional?

JM: Clay, I don’t use much, unless I am definitely playing. Spontaneity with wood and many other materials has happened more recently I suppose, after many years of knowing what I’m doing.

JR: I wonder what you think about the term playfulness and how that relates to a type of sculptural enquiry that may link our work. I’m using the word ‘play’ in the sense of inquisitiveness, and a kind of uninhibited openness in engaging with things that children have, but not all adults retain.

JM: That’s a good way to put it. I think ambiguity is in there too – embracing a sense of the ambiguous.

JR: I think having an eye for interplay, and ambiguousness is a big part of the process of staging exhibitions with works that span different time frames. I know you’ve done this on a number of occasions, and I’ve started to do it, more so in recent years. How do you approach that process?

JM: It takes a while. You can’t show everything, so you leave things out – and you’re sorry to leave some out – but then you realise if you put that in, then you can’t put in the other one, so it does take a lot of thinking. But the outcome is a lovely overview for oneself.

JR: I think the term ‘staging’ is important here.

JM: Yes, and the connections being staged are to do with size, shape, space; some sort of mental stream going on. Space is the most important part of sculpture. How much space around, how much background, making sure there’s nothing interfering with sightlines. It’s one of the problems with sculpture – with painting it’s within its own frame, but with sculpture you’ve got to plan both the interplay and eye view that you have.

JR: That’s also one of the things that always drew me to sculpture though, that it sits within our world and you get a 360-degree experience of it.

JM: Very much so, although I don’t always worry about the whole 360 degrees in the work itself. I don’t mind you walking around it, but quite often, the back might be quite flat or even incised from another sculpture. It tells a story. It’s not all carved out or finished, but that adds to the whole, because I’ve said enough.

JR: What advice would you give to an early-career sculptor working today?

JM: I think it’s hard for younger artists because you used to be able to do more with a lot less. The main thing is to keep going and to realise when you’re being brave, even when you’re not thinking of yourself as brave. You’re going to despair, but you’ll come out of that despair, something else will happen and you’ll be delighted. Hold onto those moments when something is just working – there’s nothing better than when something you know is good comes out.

Janet Mullarney is a sculptor currently dividing her time between Ireland and Italy.
janetmullarney.com

John Rainey is a sculptor based in Belfast. He is a current studio member at Flax Art Studios.
johnrainey.co.uk