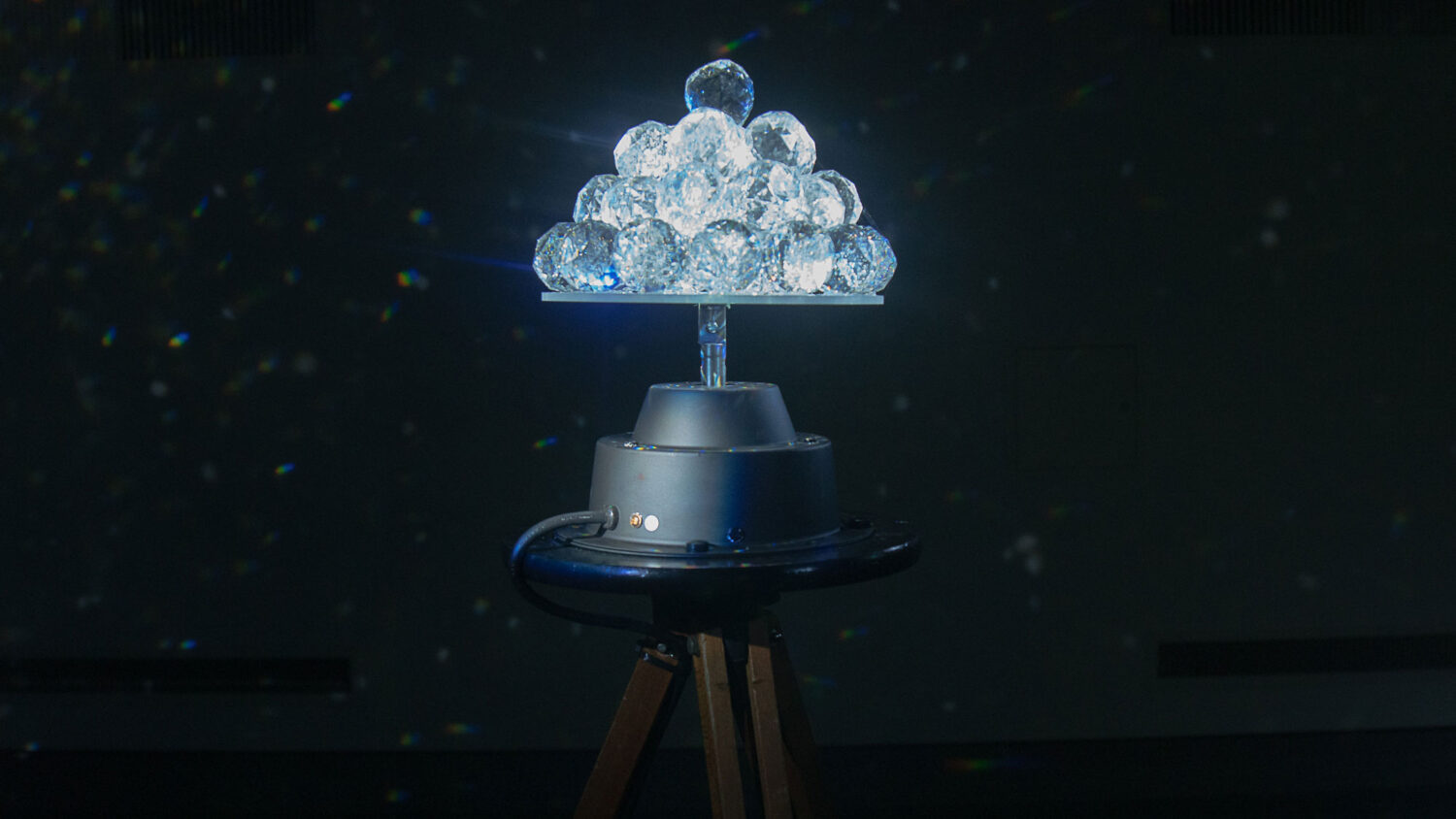 There is no better place to experience the transformative and disruptive effects of contemporary art than in Galway during November. Visitors wind their way through streets and alleyways, as TULCA Festival of Visual Arts negotiates its way into every available space in the city. In its seventeenth year, this curator-led festival occupied the city’s repurposed buildings and sparsely available galleries, sometimes operating without any heat while rain fell inside, as well as out.

Having performed ambitious interventions through her own artistic practice, which have earned her a brave and disruptive reputation, the appointment of artist Kerry Guinan as curator of TULCA Festival 2019 was an inspired choice. Guinan likes to research and examine the relationships between art, capital and place, in an age of grab-when-you-can capitalism. For TULCA, she explored human manifestations around belief – a particularly pertinent inquiry at a time when beliefs are becoming more polarised. “Those [beliefs] that we thought were laid to rest, are re-emerging”, stated Guinan, during her opening speech. “The inspiration for the festival is my belief that art is effectively ‘magic’ and that it has a profound effect on the world”.1

Enter ‘TACTICAL MAGIC’ – the theme chosen by Guinan for this year’s festival (which ran from 1–17 November 2019) – featuring 15 artists, four specifically commissioned works and 12 associated events, spread across 14 venues. From a giant site-specific mural, and a socially engaged film project, to a spectacular light installation, all manner of exciting works were waiting to be discovered. The launch party at the Festival Gallery on 1 November was a significant event in itself, as was the date, which coincided with the ancient Celtic festival of Samhain, officially marking the start of winter.

Discovered and transformed by the Galway International Arts Festival, the miraculously repurposed GPO on Eglinton Street was the latest in a long line of temporary art spaces commandeered by TULCA. At the launch, the limited lighting gave the main venue a dark, cavernous feel; it was as if we had descended into a deep grotto, adorned with mysterious artefacts. The atmosphere was unearthly and magical. During Samhain, the division between earth and the otherworld is at its thinnest, as spirits make their journey from one world to the next. That night I felt I may have made that same journey – two performances on the opening night corroborated this.

Artist Mark Cullen began by using amplified sound. A haunting chant was the backdrop to a sort of sacred ceremony. Central to this was his Metal Slug Seer, a sculptural entity, made from expandable air-ducting and aluminium – a “member of a biomorphic underclass”, which operated as a “motorised priest” for the future.2 It expelled plumes of incense into the space. Subconsciously, I was back at Candlemas in the cold of lent. I adored the mystique, the flames, the miracles – and the survival of church was never in question.

A little later, the gaunt and ghost-like figure of Day Magee appeared from the shadows, beginning an extraordinary performance within his Keening Garden Door – a wooden structure adorned with quartz stones, standing in a mound of dense brown clay. A ritual traditionally assigned to women, Day’s keening recital ushered piercing cries that tore at our very core. Mourning the recent loss of his father, the artist also seemed to be expressing emotions around the discovery of his own sexual identity. It was heart-wrenching and powerfully poignant.

Given ample space to breath in this impressive space, Diana Copperwhite’s large polychromatic canvasses were a highlight for me at TULCA. Her paintings are an amalgam of abstract shapes, influenced by media, digital technologies and personal memory. She is a master of surface, adding and removing paint at immense speed, using large strokes. Deep within these marks are windows and portals into alternative perceptual realities. They make us think about how we construct images of the world, questioning what is real and what is not.

Katherine Sanky mirrored some of Copperwhite’s shapes in her intricately engineered sculpture, Desmosome, which stood tall at the back of the gallery. A twisted trunk of a whitethorn tree, its extremities morphed into immaculate copper piping, circled spaghetti-like in the space. I considered how modern engineering processes may not be so removed from those of nature. The form was ‘heart-like’ and I perceived water (a symbol of life) flowing in and out of the lifeless tree. Sanky’s small video piece, entitled Transposon, also challenged our beliefs, regarding reality and digital creation.

Throughout ‘TACTICAL MAGIC’, Guinan extensively referenced how art allows us to suspend our disbeliefs and reminded us of our understanding around nature, science, the afterlife, our own private rituals, and even how we go about making things. In his video, Slip of the Line, Anri Sala was being mischievous. The film shows a magician disrupting the uniformity of the conveyer-belt system of glassmaking – bending stems of pristine wine glasses using only his mind. I wondered about the glassblowers; their magical powers to create are now utterly lost to a contemporary system of mass production.

Across the festival, I was intrigued by many of the artists’ material references, manifested through the use of natural, found or human-made objects, transformative technologies, or even gestures of immateriality, conjured in the mind. Copper, water, plants and light were commonplace. Helen MacMahon’s immersive light installation, Scintilla, at NUI Gallery, was inspired by the divine spark of human feeling or idea-making. Pinspot lights, trained on a cluster of lead crystals, casted reflections (taking the form of tiny snowflake-like rainbows) upon the walls, floor and ceiling of the darkened room. The work referred to the incendiary potential of human ideas, including ancient attempts to transmute ordinary metals into gold. The effect was other-worldly.

TULCA has delivered a highly successful education programme over many years, and a county schools project in partnership with Galway Public Libraries. I got involved as an intern for the 2014 festival, when I saw the transformative effect of a guided tour given by the T.Ed Co-ordinator.3 I was enraptured by the responses of children and young people to the works and over subsequent years as an Education Officer, their interpretation and exchange of ideas has never ceased to amaze me. The programme is an introduction to contemporary art, incorporating gallery tours, activities and in-school projects, and all types of conversations are sparked through the shared experience of looking together. During the first week of TULCA 2019, I witnessed twenty or so nine-year-olds looking at the sizeable Climate Series mural by the art collective, SUBSET, on the gable of a building near Spanish Arch. Some children thought it looked like a computer game, while it reminded others of a spaceship or a magical island. The greener elements represented nature and new life. The grey ‘shadows’ were telling us how we are all “making the world dirty”. I could not think of a better analogy.

Other festival partnerships resulted in a display of magical artefacts in Galway City Museum and use of the Hall of the Red Earl, 126 Artist-Run Gallery and Engage Art Studios as exhibition spaces. There was a significant programme of events this year, encompassing music, film, performance, curator tours, workshops and an activity space specifically designed for families. Environmental scientist, Nikita Coulter, combined scientific and folk techniques in a unique weather-reading demonstration. We were reminded about our ancestors’ abilities to predict the weather without meteorological aids, as if by magic, reading the clouds, the movement of animals or the direction of the winds.

Social engagement was celebrated in a newly commissioned film and installation by folklore collector Michael Fortune, entitled The Plants, Flowers and Trees of our People, which recorded “plant-based beliefs” in East Galway. Made in collaboration with a district heritage group near Tuam, this gently paced film shows local people describing the origins and magical powers of plants in their gardens and surrounding landscape. Some talked about their guardianship over certain trees, and why some specimens have survived because of local folklore or connections to past events. As a viewer, I felt the effects of this footage intuitively – that the footsteps of previous generations still resonate, thus influencing our belief systems.

As I immersed myself in ‘TACTICAL MAGIC’, it was hard not to be convinced by Guinan’s proposition – that we can open ourselves up to the possibility of art as magic, by suspending our disbeliefs and investigating the intangible caverns of the mind. In honing our ability to look, to imagine and to trust the instincts of artists, we can indeed be transported to magical places.

Hilary Morley is a visual artist, curator and the editor of MAKING.ie. She has worked as an Educational Officer with TULCA Festival of Art for the last five years.