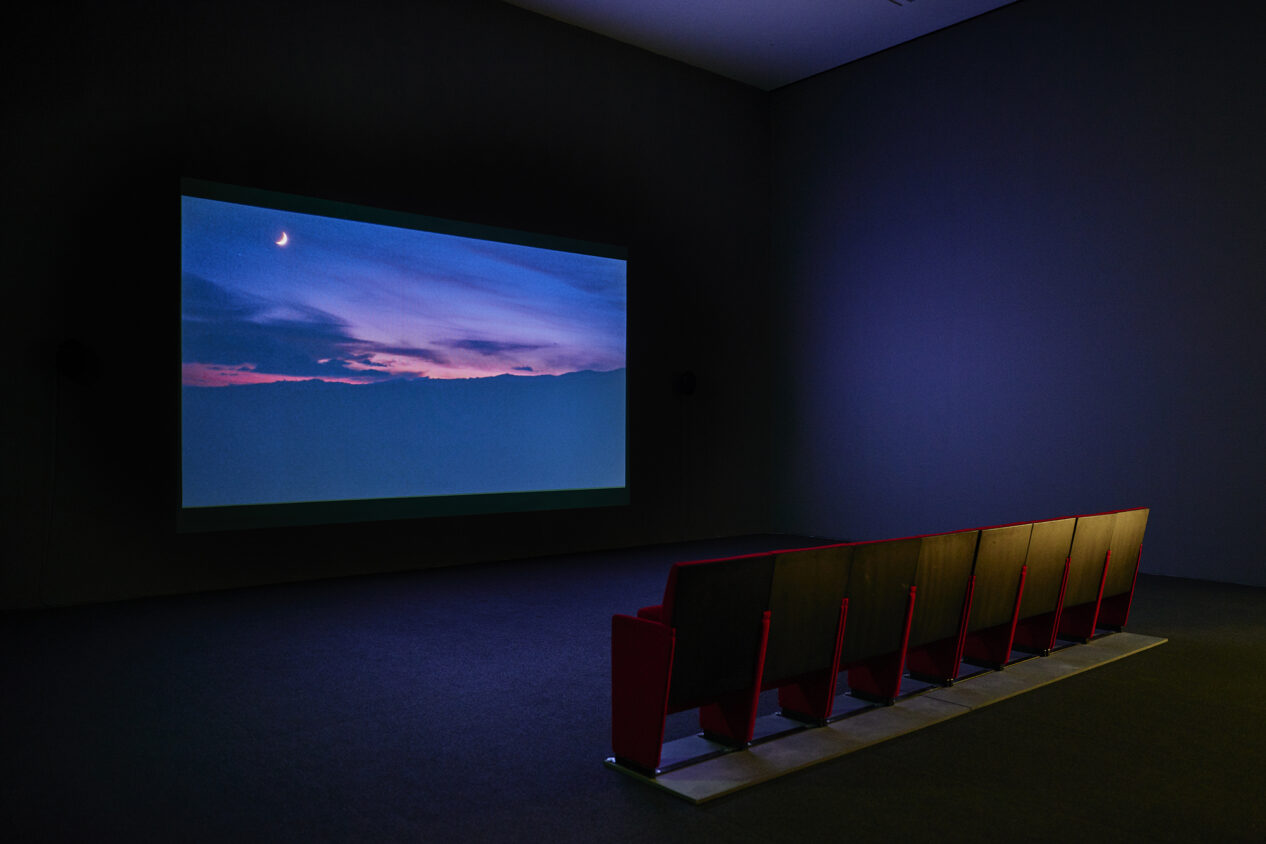 This season’s exhibitions at VISUAL have been programmed around the themes of landscape, nature and found materials. In the Digital Gallery on the first floor, is a screening of Pat Collins’s new moving image work, Twilight (2017). Filmed off the West Cork coast over a two-year period, Twilight is as vibrant as a living painting. The quality of light captured in the footage vividly portrays the pinks and oranges of a sunset, which gradually give way to midnight blue, as darkness encompasses the scene. Voluminous grey clouds pick up speed and move ominously across the screen. To the left, the high moon oversees a purple-hued silhouette of a nearby headland.

Twilight is not a silent occurrence; rather the landscape in the late evening quietly hums, as people sleep and the world keeps turning. Collins has collaborated with the sound artist Chris Watson to create the film’s audio, which was developed through a series of field recordings. The soundtrack is not constant, but is interspersed with silent footage, in order to accentuate the noisier moments. As the light seeps from the sky, a gull can be heard in the distance and a crescendo of birdsong escalates across the darkening landscape.

On VISUAL’s ground floor, Paul Mosse’s retrospective ‘What’s with the Apocalypse?’ occupies three galleries, bringing together an impressive selection of work, ranging from 1967 to the present. Mosse is probably best known for his use of non-traditional media and the creation of precariously-balanced sculptural pieces. Viewing his early work in the Studio Gallery, one can observe the artist’s progression from geometric colour drawings in the 1960s to layered and delicately sculpted work in recent years. His later work is typified with the centrepiece, UNTITLED (Pink) (2011), a chaotic, mixed media sculpture which appears in a state of dereliction or collapse, while also somehow managing to maintain a delicate equilibrium.

A tangible shift in style is evident in the intervening years, with Mosse’s artworks becoming more layered and textured, causing the artist to refer to them as “two-and-a-half dimensional painting”. In Essex Garden (1985), for example, the use of car paint and the layering and cutting of paper, gives a topographic feel, highlighting the fact that landscape is a constant source of inspiration. In the Main Gallery, wall-mounted pieces are colourful and intricately-layered, while central, plinth-based sculptures loom large, echoing the texture of hedgerows.

Mosse builds complex surfaces from found materials and detritus that echo the chaos of the natural world. Pieces are allowed to decay organically – a process that prompts the viewer to contemplate human aging and mortality. In The Floor (2016), the artist used discarded materials that were literally scraped off his studio floor and mounted on a frame, which allows inspection of the anatomy of the work from both sides. Mosse is also influenced by Nkisi Nkondi – African idols used in tribal rituals that have pegs, blades and nails inserted into their surface. Mirroring the appearance of these ethnic artefacts, Mosse uses materials such as lint, grit, wooden skewers, nails and sawdust, mixed with glue and acrylic in his work. To highlight the artist’s extensive use of unorthodox materials, VISUAL commissioned anthropologist Juliette Harvey to visit his studio and harvest a collection of items found there. The resulting work is ‘Materials Library’, a collection of intriguing items that functions almost as a museum-style cabinet of curiosities. Displayed across trestle tables and minimalist shelving in the gallery, the collection comprises an unusual range of manmade and organic specimens: cobwebs are held together in a structural form by grit and leaves; deconstructed nails and lead shot are displayed in jars; examples of antique lace and taxidermy specimens are presented in glass cases.

Audiences have the opportunity to engage directly with some of these exhibits and touch is encouraged. Tours for visitors with visual impairments will also be delivered during the exhibition, along with the introduction of braille signage, so that they can experience the sensory qualities of the materials. A pertinent and accessible essay by Harvey accompanies the library and explains how Mosse wastes nothing in the artmaking process, as he engages with the “life and death of nature” on a daily basis. Over four decades, Mosse’s work has challenged audiences to think about the cyclical nature of decay and renewal, both in life and in art. Above all, this intriguing and sensory retrospective exhibition prompts reflection on the artist’s favourite material – time. It is therefore worthy of deep contemplation and multiple visits.

Erika Tyner is a visual artist and photographer working in County Wicklow.