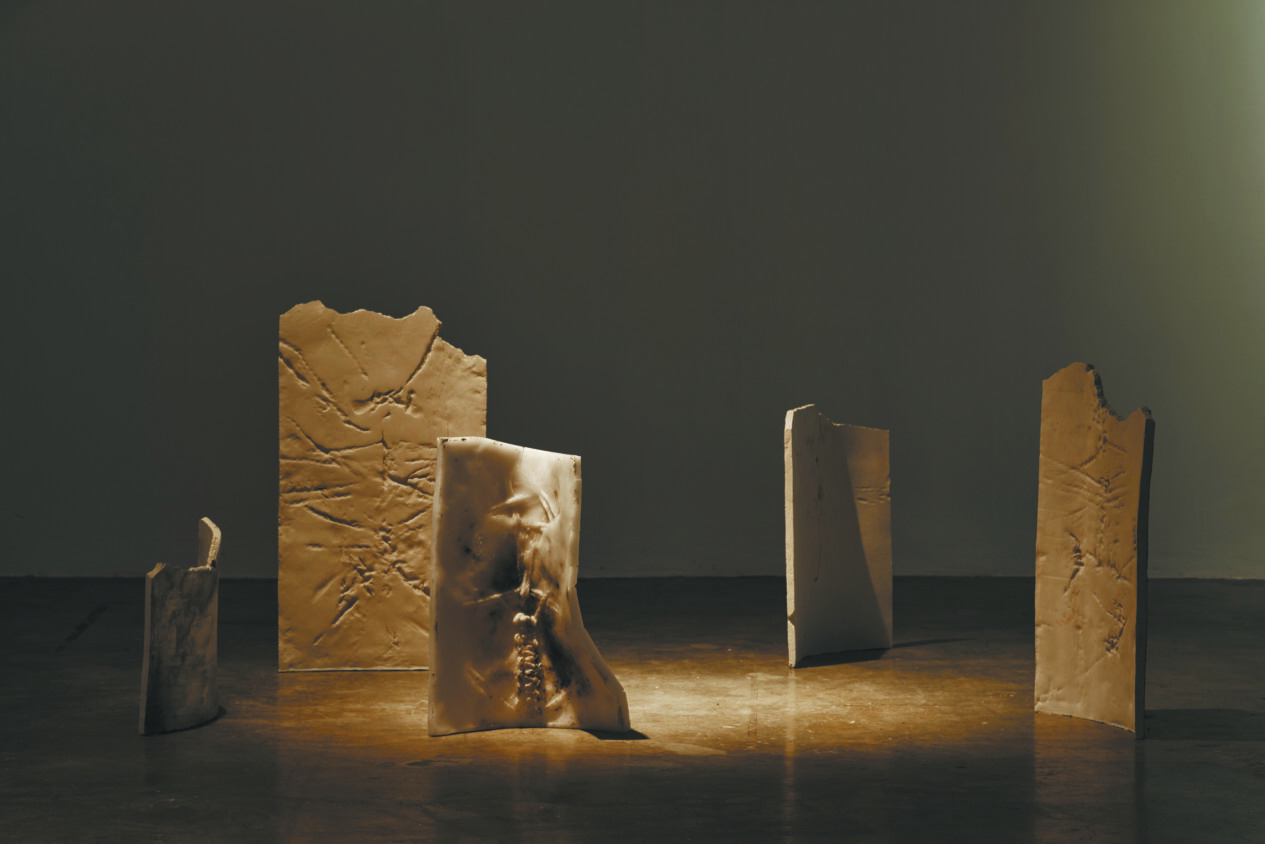 ‘Colourless Green Ideas Sleep Furiously’ sounds like nonsense, and it is – a phrase coined by Noam Chomsky to be grammatically correct but semantically all over the place. In this ambitious exhibition curated by David Upton, five geographically diverse art practices explore ideas of transient or un-locatable meaning via their own un-locatable objects, objects rendered by impressions and residues, and images deviating between fact and fiction, movement and stasis. A story in the exhibition booklet describes the fate of Byzantine icons bought at a Turkish Bazaar in the 1920’s. Eventually ending up in the National Gallery of Ireland, the icons, separated from their original place and function (and unable to return to a home that no longer exists), have been opened up to new kinds of meaning and attachment. The exhibition booklet usefully outlines some aspirations, among them, “To open discussion around ideas of dissolution and dispossession, loss, of cultures in crisis and futures altered, of cataclysm – and [ask] what happens after all of this?” That’s a lot to ask of a single exhibition, but the fate of the icons becomes a unifying concept, a paradoxically fugitive underpinning.

In a relatively cerebral show, works by Swedish artist Ida Lennartsson convey a powerful sense of materiality and touch. Modest in size, the floor-standing, irregularly-shaped tablets of Ruins (2013) have, like a mini Stonehenge, a sense of mystical presence. Impressed with rope patterns, the clay and wax forms also suggest fossils, body casts or flayed skin. Allusions to the sacred and profane also come together in Lennartsson’s drawing series, Tsuri (2013). In chalk rubbings of knotted rope patterns, her creased, black paper sheets reveal the intricate bindings of a Japanese form of bondage. Untied from these connotations, the rope patterns emerge from their stygian ground like illuminated relics.

Relics of a different kind are conjured in the graphic works of Erik Bulatov. Featuring text superimposed over images of urban landscapes (I was reminded of Ed Ruscha), these detailed drawings hark back to Russian Constructivism, and the didactic role the arts in Soviet Russia often conformed to. Despite a connection to the emblematic icons as conveyors of orthodox pieties (though challenging orthodoxies seems to be part of Bulatov’s brief), in the six small works presented here, his imagery and Cyrillic typography remain stubbornly opaque.

Chronoscope, 1951, 11pm (2011) by the Venezuelan artist Alessandro Balteo-Yazbeck, in collaboration with Media Farzin, is more accessible, and offers a fascinating glimpse into the early days of Talking Heads TV. Reworked from original American broadcasts, the video collage shows expert speakers offering polite analysis of the global economy. They talk about the Middle East, and the Iranian oil industry in particular. Bow-ties and old-fashioned cordiality seem like the only things out of place in conversations that might otherwise be happening today.

While Balteo-Yazbeck’s work is unambiguously concerned with the dynamics of power, the mood elsewhere is more cryptic, the exhibition’s miscellanea of artefacts like pieces in a puzzle. None more so than Lourde et dure comme de l’acier (2013), a piece by two Dutch artists, collectively named Gerlach en Koop. In an apparently casual floor arrangement, a dumbbell of polished steel, components of antique dumbbells, metal discs and steel cones appear like the remnants of some gnomic board game. Translating the French title into ‘Heavy and hard as steel’ didn’t leave me any wiser. A second work by the pair is called Untitled (Scatter Piece) (2013) and comprises a string of pearls without pearls. Presented in the manner of a priceless museum artefact, the fine, periodically knotted string made me think of the 1953 Max Ophüls film The Earrings of Madame de …  about a set of gifted jewels that become a clandestine currency between characters. That film’s cyclical conceit felt somehow connected to the absence of the signified in Gerlach en Koop’s piece. An entirely fanciful connection, but in the duo’s enigmatic work, the relationship of language to things seen or unseen leaves everything up for grabs.

Projected onto a free-standing wall angled at the centre of the room, Re-run (2013) was made by the India-based Raqs Media Collective. Feeling pivotal to the show overall, the grey and blue-toned image shows a group of people, seemingly a section of a larger crowd, pressed together in a sort of anxious-looking conga line. The work is based on a Henri Cartier-Bresson photograph taken in Shanghai in 1948. Queuing to exchange their rapidly devaluing cash for gold, Cartier-Bresson’s original photograph captures the citizens of pre-Communist China reacting to another cycle of boom and bust. In this restaging – a transposition of contemporary figures into the look and choreography of the original –  the photographic image has become subtly animated. Not immediately apparent, an extremely slow, pulsing rhythm gradually asserts itself. The image is breathing. The slow repetition suggests the convergence of intimate and historical forces, the cyclical nature of global and individual fates entwined.