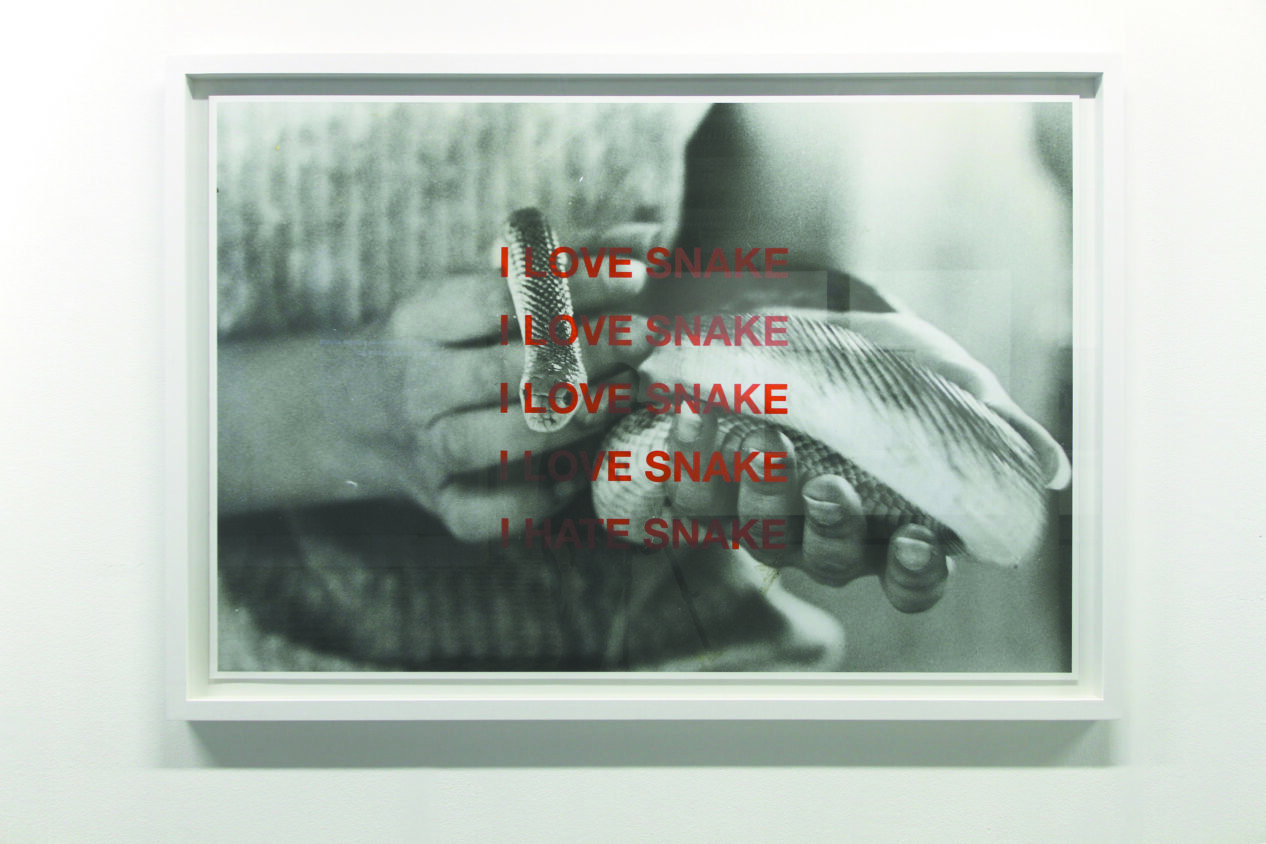 In ‘Snake’ the image is an interloper. At first unwelcome, it is nonetheless invited into the artist’s life for the long term. Clare Strand’s repulsion with the animal has compelled her to collect snake imagery since childhood, from scrapbooking serpentine forms in the loosest sense, to collecting more specific images – half glamour, half family-album-style photographs – of women who hold and love them.

The project initially took form as a small photobook, bound in a tactile scale-patterned cover. As an exhibition, ‘Snake’ again employs these uncanny resemblances, with the repulsive object of the image given a dissonance. Seven photographs of women with snakes are blown up many times beyond life-size and cropped close, abstracting these two living forms into a disturbing symbiosis of glamour. Faces are cut across the middle, showing only the women’s joyous or fond smiles, and emphasising the point of contact where scales meet flesh. The animals are deftly handled or draped around limbs, fingers merging with the tones of the snakes’ tails. In one grainy, pocked image in particular, the snake is easily mistaken for costume jewellery at first glance. In another, scales echo the polka dots of a blouse, something that’s in itself echoed in broad strokes – perhaps ink – on top of the original image. It exaggerates the pattern and nullifies the animal.

The texts applied to these images have the same obliterating effect. Formed via online poetry generators using the words on the back of these found images, they read like suggestive song lyrics, nursery rhymes or disjointed, obsessive statements – “7 FOOT PYTHON/ ON HER HEAD/ SNAKES ARE MY THING/ SHE SAID”. Despite being graphically imposing, the screen-printed colour is slightly translucent, assimilating into the image and assuaging its impact. It’s an effect not dissimilar to looking at an Ed Ruscha painting, where landscape is intercut with slogans: in the same way, it’s hard to have a primordial reaction to an image when engaging with the demands of language.

At the entrance to the exhibition is an ongoing projection of this poetry generation. It is more disjointed and nonsensical than the text in the photographs, mimicking a live stream of half-formed thought. A fraction of this is printed out on till roll opposite the projection and captioned “A poem not by Clare Strand”, ostensibly for the viewer to tear off and take away.

Collecting imagery dispels Strand’s passivity in her reaction to snakes, yet automation reinstates it. The proffered text at first seems like a tangential or even flippant gesture – a diminution of poetry that’s somewhat re-pedestaled when made into a physical object. In practice, however, it becomes a subversion of rationality and audience participation. When uptake is low, the amassed ream of text has the same redolence as the scrapbooked film reels, hosepipes, rubber bands and vacuum cleaners, safely encased in the display case, to the snakes in their vitrine-like box frames. As the end of a process the texts themselves are meaningless, digitally-aped streams of consciousness. The invitation to take is present, but isn’t attractive, in an odd way echoing – both directly and inversely – the artist’s own compulsion to collect what she hates.

The poems are a sample of re-sampled information, a scrambled response that stands in isolation to any emotion or reason. The ongoing presence of this automatic poetry generation is like an over-compensation for the artist’s long-held lack of reason in relation to her subject matter.

Both snake and image are simultaneous tokens of affection and loathing. The antagonism of the artist’s responses – one to squirrel away in personal scrapbooks, another to publish on walls and pages – emphasises the unavoidable degree of inscrutability in found imagery, and toys with its enticing nature.

The cultural symbolism of the snake and its gendered connotations are of course present in this exhibition, and referenced in the exhibition text, yet they seem to be secondary to the work when it is translated from book into installation. The processes and remnants of collection on display seems to be more engaged in the immersion and separation of such a working process, and the visceral effect of visual information over any cultural connotations. At this scale, the second-hand punctum of these photographs seems to prevail over any studium. As viewers, we aren’t necessarily meant to share in Strand’s revulsion, nor are we encouraged to – we just witness different aspects of control and unpredictability as subject, object and viewer.

There is a nihilistic approach, or active negation, to ‘Snake’. The poems appear a word at a time, each one obviously irrelevant to the one before it. They then disappear, suitably forgotten in their own authorless position. The advertisement-sized women are de-humanised, the snakes de-sensitised, to become objects within inscrutable, mediated layers.