I hate the ticking of a loud clock; it reminds me that time is running away. However, over the last few months, our experience of time has altered – the days felt swollen, weeks were bloated, yet months slipped past. Stripped of schedule or routine, our normal methods of timekeeping felt arbitrary and useless.

Ben Rivers’s film, Ghost Strata, currently showing at VISUAL Carlow until 18 October, was my first excursion to see art after lockdown. The title of the work is borrowed from his 2009 filmed conversation with geologist Professor Jan Zalasiewicz, who talks about the anthropological traces on geology, made in recent centuries. Discussing the ‘manhandling’ of the earth, he gives the example of the Park Tunnel in Nottingham, built in 1855. This passage tunnel is carved out of the city’s soft sandstone, exposing sedimentary layers of ‘solidified time’. ‘Ghost Strata’ is the term used to describe the scooped bedrock – the imagined and theoretical layers that no longer exist, due to this human intervention of a vehicular route for horse-drawn carriages. The term is contradictory, denoting a lasting ephemerality, an absent presence and an invisible impact. The mystery conveyed in the film’s title also comments on Rivers’s dedication to 16mm film; images are only made visible through photographic processing – the unknown is eventually revealed.

In the words of John Ruskin, “We did not travel for adventures, nor for company, but to see with our eyes…”1 Ghost Strata is a travelogue, a visual journey of captured snippets and scenes, which chronicle the artist’s travels to Krabi in Thailand, Nottingham in the UK, the island of Syros in Greece and São Paulo in Brazil. During a time when travel is restricted and we are limited to the corners of this island, it is a joy to indulge in glimpses of the unfamiliar and exotic. Footage of darting birds in the moving mist, as well as close-ups of curling bamboo husks, offer overt moments of a homo sapiens gaze on the world. The overlaid narration for these scenes includes statements such as: “Observe as much as you can” and “What does it mean?” This voiceover echoes an innate human desire to consume and interpret; to continue referencing Ruskin, it reinforces the idea that nature can be reduced to a constant supply of imagery and inspiration. 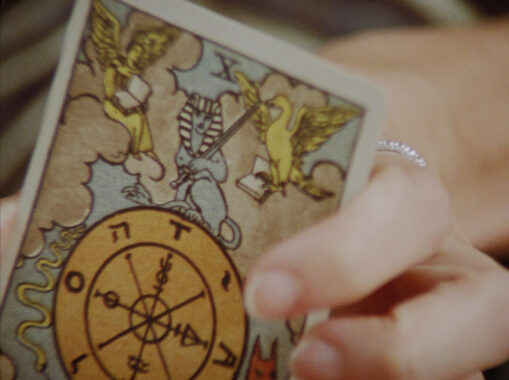 The film is structured using the monthly formatting of a diary. The months vary in shots, shifting from the personal and intimate, to the distant and immense. One scene features an eyelid of blue sky from the Cave of Pherecydes in Syros – named after the author of a significant cosmogony in the Pre-Socratic era. This scene is accompanied by the reading of a giggling girl, who struggles through the Greek pronunciation of ancient philosophers and place names. Elsewhere, black and white footage depicts an avid mudlark, as he flaunts the artefacts he has scavenged from the banks of the River Thames. These in-between months are flanked by tarot card readings, the last session being ominously foretelling. However, we are comforted by the psychic’s statement: “You cannot predict your future…”

The measured pace of the monthly countdown is complicated by a fluctuating sense of time: tokens and references of the ancient and historical present themselves in the now; whilst other moments serve to highlight the futility in trying to prognosticate the future. There is an undulating rhythm to Ghost Strata, with the strategic composition traversing temporarily, not only through film, but also through text and sound. It calls to mind Alfred North Whitehead’s philosophy, Process and Reality, which asserts that time is concrescent with human experience – that everything together undergoes the creation of time – challenging perceptions that time is linear and detached, with the hypothesis that it is perpetual and relational. In this changed COVID-19 world, Ghost Strata has taken on new meanings and resonates differently, in terms of human presence and impact, as well as our ongoing attempts to structure time.

Rachel Botha is the Emerging Curator in Residence at Kilkenny Arts Office and a co-director at Catalyst Arts, Belfast.