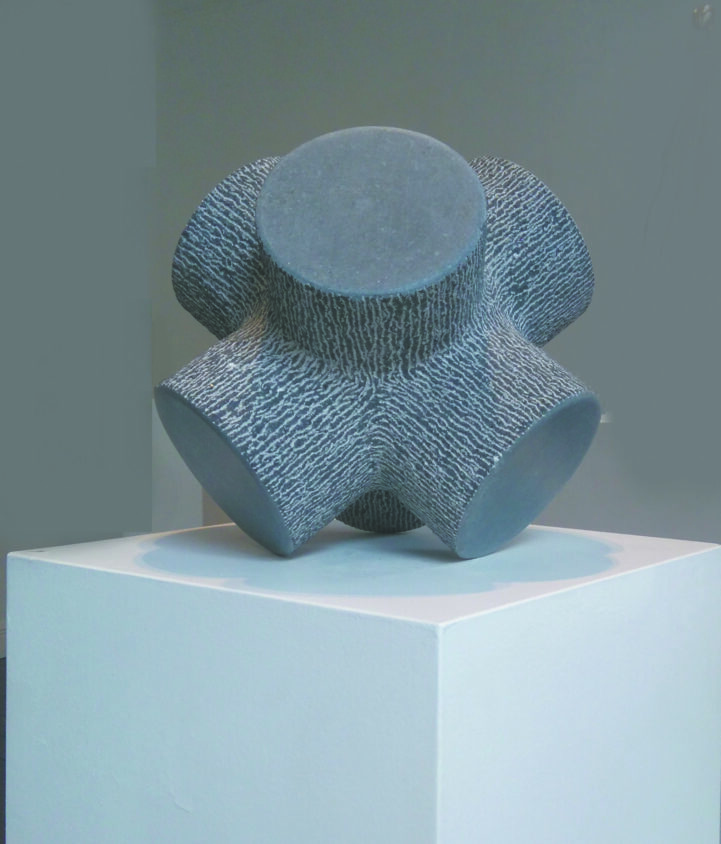 As the title suggests, ‘Forged Carved Cast’ is an exhibition about the act of making. It is about an intense relationship with materials and processes. The exhibition’s premise is arguably against the run of current practice in that it foregrounds the individual hand of the artist working on discrete objects. This quietly subversive idea is coupled with another: the messy business of life and emotions. Many of the works explore deeply personal narratives, and are rich in metaphor and allusion. On entering the exhibition, the viewer encounters the work of Orla de Brí and Eileen Mac Donagh, installed side by side in the sunlit main gallery space. The works have been sensitively installed and given sufficient room to breathe.

At first glance, Mac Donagh’s work appears to employ a minimalist language which is distinct from the other works in the show. Her stone sculptures present geometric configurations, with evidence of the carving processes fully on display. This dialogue between form and materiality is crucial to reading these works. For example, the corrugated surface of Jackstone 1 is like a rock face marked over thousands of years by rivulets of water, while Jackstone 5, fabricated in distinctive orange marble, appears both as a sculpted and natural object. Jackstones is an ancient game which involves throwing five small stones up into the air and catching them. Mac Donagh’s five sculpted jackstones would take quite a bit of catching! This friction between the implied function of an object and its total unsuitability for that purpose gives these sculptures their power. They also convey interesting ideas about time, not least because jackstones is a game involving split-second reflexes. The sculptures’ symmetry and high quality of finish indicate many hours of labour. The inherent qualities of the stone itself speak to us about the enormity of time.

Orla de Brí’s nearby sculptures have very different qualities. They are assemblages in bronze made from casting found natural forms and combining them with carved and modelled figures. The delicate constructions play with scale; casts of twigs become giant trees when presented alongside tiny figures. The use of bronze patination, highly-polished surfaces and small brightly-coloured elements dramatise the relationship between the figures and the organic elements they are intertwined with. Sculptures like Copse and Outer Scape 2 feature trees growing from the human body, invoking the myth of Daphne and Apollo as poetically recounted by Ovid in Metamorphoses. In this myth, the terrified Daphne transforms herself into a laurel tree to escape capture by Apollo. De Brí’s sculptures update this mythological imagery, asking us to consider recurrent patterns of human behaviour across history. The idea of transformation – of figures sprouting forth trees or being encased by them – is emotive. Such expressive narratives stand in contrast to the passivity of the figures, who appear like mannequins.

In the next room, there is a cluster of four sculptures and two sets of wall-mounted drawings by Catherine Greene. The works Remnant 1 & 2 and Wolf Remnant depict the animal with skin flayed from its body, yet still retaining its musculature in fragmentary form. Elsewhere, another work in bronze, entitled Angel, depicts a figure who is neither wholly male nor female. Its perforated wings don’t feel like they would lift the figure off the ground, yet the angel’s body appears to be delicately touching down after flight. These ambiguities and inconsistencies make the sculpture work, as do the deliberate references to the small Roman bronzes one might find in museums of antiquities. By appropriating the look and feel of such devotional objects, Greene seems to imbue her sculptures with a magical potential.

Cathy Carman’s six sculptures are the final works in the exhibition. The Burden of Joy and The Burden of Fear are placed directly on the floor and are the largest works in the show. They depict isolated figures on platforms, bent over with their backs pierced violently at the spine with large planes of metal. In Carman’s smaller works, she explores a series of archetypes. Healing features a figure peering over a ledge to observe an identical figure looking upwards, suggesting a reflection on water. The myth of Narcissus is also implied; however, the precarious stilt construction upon which this vignette takes place, and the expressionistic contortions of the figures, make this a very contemporary interpretation of the theme. In Carman’s wall-based bronze Rachel, a figure hangs desperately from the bottom of a ladder at the feet of someone who seems unwilling to help. The complex meaning is left for the viewer to decode. Rich reds, blues and gold are used – colours reminiscent of sacred objects from different eras. Carman’s works combine complex symbolism with formal inventiveness, and, like all the artists featured in this exhibition, she uses the richness of sculptural language to explore spiritual and existential themes.

Andy Parsons is an artist based in Sligo. He is the founder of Floating World Artist Books.