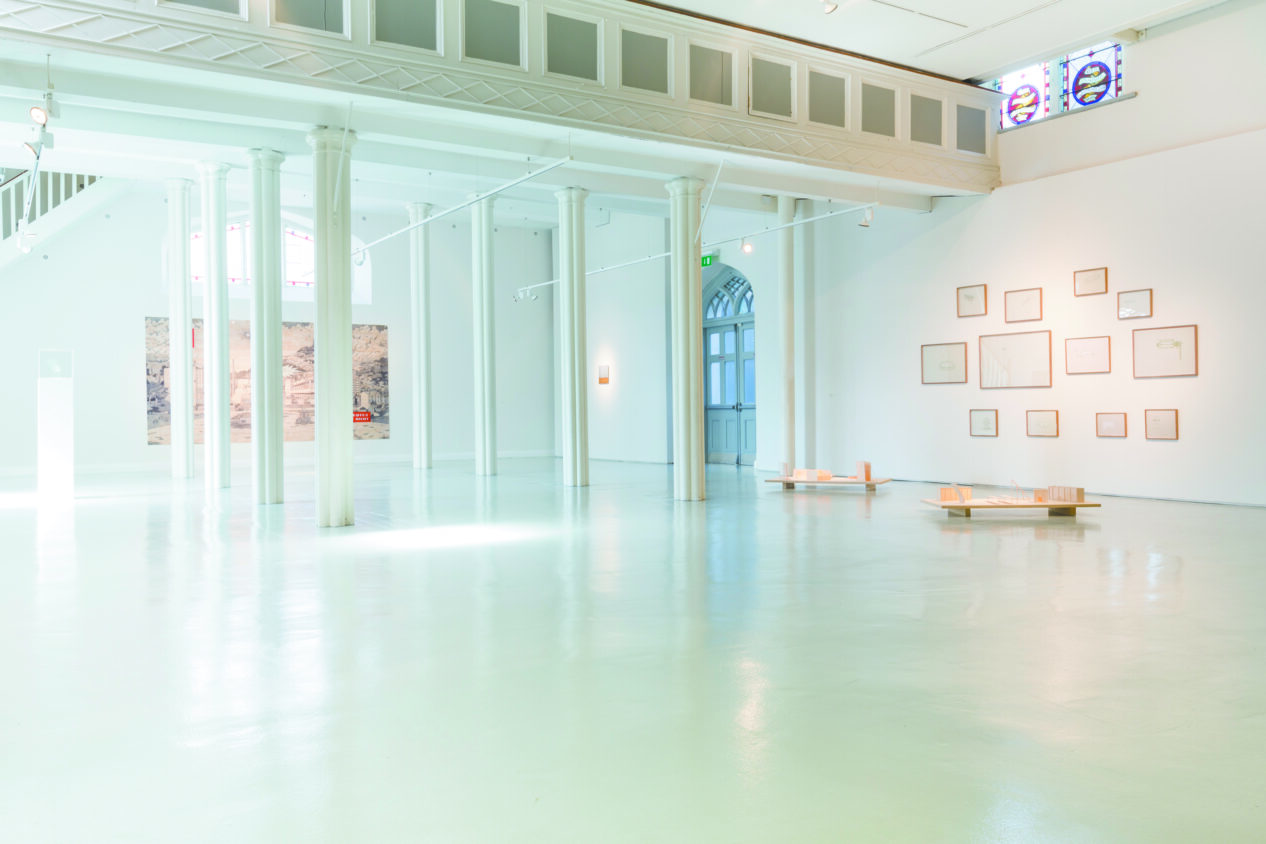 For Vitruvius, [1] successful architecture combined “firmness” (structural integrity), “commodity” (function) and “delight” (aesthetic pleasure). While these remain core requirements, contemporary conceptions of the discipline tend to be more fluid. ‘This is Not Architecture’, a two-site group exhibition in Drogheda, animates thinking around the nature of its subject, probing its conventions through considerations of similarity and difference. Curated by Highlanes director Aoife Ruane, the exercise is enhanced by the contextualising environment of the gallery, located in a repurposed Franciscan church. Built in 1829, it combines stained-glass windows, gothic arches, cast-iron columns, a marble altar with late Celtic Revival tabernacle door, and new, unobtrusive glass balustrades. The exhibition sensitises visitors to this blend of features, which activate connections across the works.

Mansion II (2012), by Eithne Jordan, is situated on its own in cloistered half-light, which compounds its depiction of a desolate Dublin streetscape. The eponymous mansion, with blind, unlit windows, is portrayed from a low angle with a slightly skewed perspective. There are no parked cars along the roadway, and the lights in a nearby building are cool and uninviting. If architecture is for human use, this is scarcely evident here. (Indeed humans are absent from all the featured works; although at times their presence is evoked.)

The mood brightens downstairs, where, despite minimalist décor, inherited features inform the visitor experience. While surveying the drawings in Elaine Leader’s Untitled (2016), a roaming reflection from a stained-glass window boosts her effort to “de-stabilise our preconceptions of space and how we move through it”. [2]  These framed works feature an eclectic mix of structures, each adrift against an over-generous ground of workaday paper. Their lack of coherence is replicated in two floor-based groupings of balsa-wood models, fragmentary presentations that highlight the unity of the surrounding milieu. They emulate architectural mock-ups, but appearances deceive; what look like enclosures do not close, while a would-be staircase lies recumbent.

Gerard Byrne’s C-prints, NYCW0335, NYCW1036 and NYCW2530 (1996 – 1999), feature interior spaces in disarray, shot through windows and layered with reflections captured from neon adverts. Like the real-time reflections in Leader’s works, they demonstrate the presence of glass, which sets up tensions between inside and outside, aspirational and actual. There is a sense of choreography across these images. The first is a rundown industrial space, in which a foregrounded stepladder shares taut linearity with the architectural ideal – except that it lies flat (like Leader’s balsa-wood stair), reading as a metaphor for decrepitude. The second shows an unfinished build, with a snake-like formation of electrical cables coiling towards the viewer, while the third features an upright ladder, more stable than the space in which it stands.

Maggie Madden’s Overgrowth (2011) is displayed within Perspex, another transparent medium. A blue optical-fibre construction just 23 centimetres high, it engages a dialogue about geometry, proportion and colour. Its spindly ‘legs’ support an expanding network that thrusts upward and outward, defying plausible architectural translation, while its scribbly reflections on a foam-board base evoke a sense of the organic. Winnie Pun’s similarly small-scale Untitled (Line) (2012) is a C-print of a pastoral, if unremarkable, landscape upon which scarcely perceptible lines are drawn. A closer look reveals faint indications of distant industrial structures that sully the rural archetype. Are these real or trompe l’oeil interventions, and, if real, what might they be?

The questioning continues with the monumental April 22nd (2013) by Stephen Brandes. A visual account of the diary of the fictional Albert Sitzfleisch, [3]  the piece is executed in marker and acrylic on wood-effect lino. The systematic draughtsmanship is that of a proficient technician, but while buildings abound in the composite scene, what is constructed is less bricks and mortar than a fanciful history with textual elements. The juxtaposition of a graphic sunburst (under the radial leading of a stained-glass window) doubly enacts the trope of validating prevailing order by invoking the divine. Elsewhere, its group of gravity-defying wooden planks recalls Maggie Madden’s impossible form, and the smooth-hewn plinth of an equestrian statue bulges with outcrops of rock, its order undermined by nature which – as in Byrne’s images – always fights back.

Next door to Falling out of Standing (2017), an atmospheric and sometimes chilling video installation by Owen Boss, Elaine Hoey’s Blueprint for a Virtual Nomad (2017) provides a virtual reality escape route out of and beyond the prevailing architecture. Physically swapping the Highlanes for a smaller related showing at Droichead Arts Centre builds on this sense of immersion. Its doors and windows are blackened to create a womb-like experience, in which visually connected works by Leader and Jordan – and Colin Martin’s video work Basic Spaces (2010 – 2017) – further explore conceptual and material aspects of place and space. Across the two venues, ‘This is Not Architecture’ exploits the reverberating strengths of a group show to re-present architectural qualities in a productive crosstalk that fosters visitor engagement.

Susan Campbell is a third-year PhD candidate at the University of Dublin, Trinity College.

1. Marcus Vitruvius Pollio was a first-century AD Roman architect and engineer and author of De Architectura.