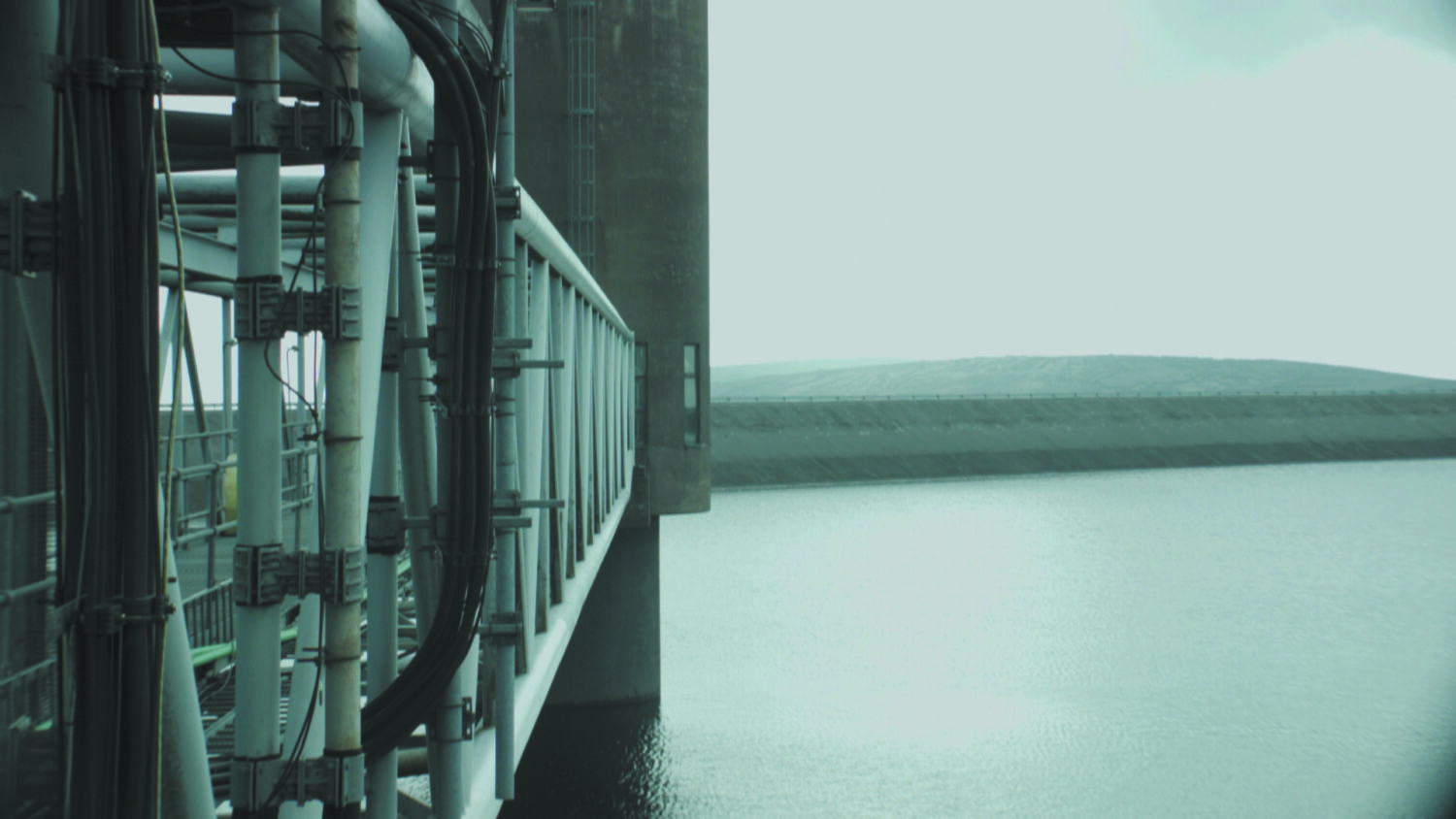 Janine Davidson’s ‘Into the gravelly ground’ centres on an unusual site at Turlough Hill, County Wicklow. Here, embedded amidst scenic walks, is Ireland’s only pumped hydro-electricity plant. The film work 53012762459 features this structure, its interior and exterior, its machinery and technology. Also depicted is another reservoir at this same location: Lough Nahanagan, which was formed during the Ice Age. Designed to impinge as little as possible upon the environment, the plant’s main station is buried out of sight behind the mountain. In Davidson’s 22-minute film, the structure is so sleek and streamlined that it appears almost tentative, partaking in the muted tones of the naturally-formed lough. The camera, replete with slight shudder, moves between various viewpoints: we are on a bridge, we catch glimpse of an open door, we are looking at a stunted, top-heavy tower emerging from the water. Importantly, the film makes no distinction between the two formations, and the lens portrays the machines and their inferred functionality with the same quiet, detached observation as it does the rock face and the water.

The structure, indeed, is so pared back and the terrain, for the most part, is so nondescript, that we might be moving through a depopulated dystopia. In this distant or proximate future, the geological and manmade structures seamlessly coexist in formal and even aesthetic terms, entwined on several levels by their shared intent of containment and their mutual relationship with water. Slowly, however, we come to be affected by the stark angles and the constant thrum of electricity. The shots are long and hypnotic, the viewpoints and angles are repeated, and the longer we watch, the more sinister the plant becomes. The effect is purely accumulative, and sees the plant glean a material sentience, perhaps more subversive than we first suspected. Its convergence with the landscape, we understand, is still unfolding.

The exhibition’s title, of course, suggests excavation, and the final location is a vast, subterranean chamber. Lit by artificial light, the textures here seem rougher, and this change in register is marked by a shift in the camera’s treatment: it begins a backward track through a long tunnel, the continuous movement giving us a sense of depth and scale. The film ends with our exit into daylight, and the viewer is left to consider the disconnect between the plant’s public existence as an unobtrusive assembly of cable and steel, and the crudely formed space beneath – a space that can only have been made by burrowing and blasting. The reverberations of its construction cannot help, it seems, but manifest somewhere, and the architectural innovation of the power station comes at the cost of this vast, inelegant intrusion concealed below ground.

This notion of convergence and its repercussions is meted out across the rest of the exhibition, with photographic prints appearing to ask: what are the effects of such structures, long-term and immediate, seen or unseen? How can their more pervasive, insidious aspects be captured? Davidson suggests that the resulting documents will be equipped with a degree of obscurity and distortion, manifesting in material form as well as in the gaze itself.

Taken in the vicinity of Turlough Hill, Davidson’s photographs formally expand on the concealment evidenced in the film. Their surfaces are predominantly shadow, and we see only a blurred and unspectacular segment of landscape, the shape of which conjures the aperture of an outdated optical device – perhaps real, perhaps invented. This sense of alternative technology and collected ‘data’ is compounded in Natura I and Natura II, suspended digital prints that seem to map the range of an unknown intensity, radiating from an epicentre that is black with energy or interference.

Tunnel, a second film work installed in darkness, more explicitly refracts the gaze. Filmed inside Túnel de La Engaña in Northern Spain, the piece consists of a seven-minute loop projected onto a diverging mirror. Throughout is the monotonous sound of footfall crunching on terrain, and this grating repetition, combined with the wilful obstruction of the mirror, creates a sense of endless entrapment and stunted progression (this railway tunnel, in fact, was never completed). Here, it is the convexity of the mirror, with its instant reflection and reversal, that disallows clarity. By circumventing the gaze at this early stage, the work suggests that there is no clear view to uncover; the distortion is both material and ontological.

It seems pertinent that this fruitless footfall is the sole sensory reference to human activity. Across the exhibition, bodies are notably absent. To emphasise so keenly the attempted passage of a body through space seems to suggest that such topographies require alternative methods of encounter. Where environmental distortion manifests as refraction and occlusion, we must reassess the tools at our disposal, at the level of the senses, as well as technological device.

Sue Rainsford is a writer and researcher based in Dublin. She was recently announced as recipient of the 2016 VAI/DCC Critical Writing Award 2017. suerainsford.com