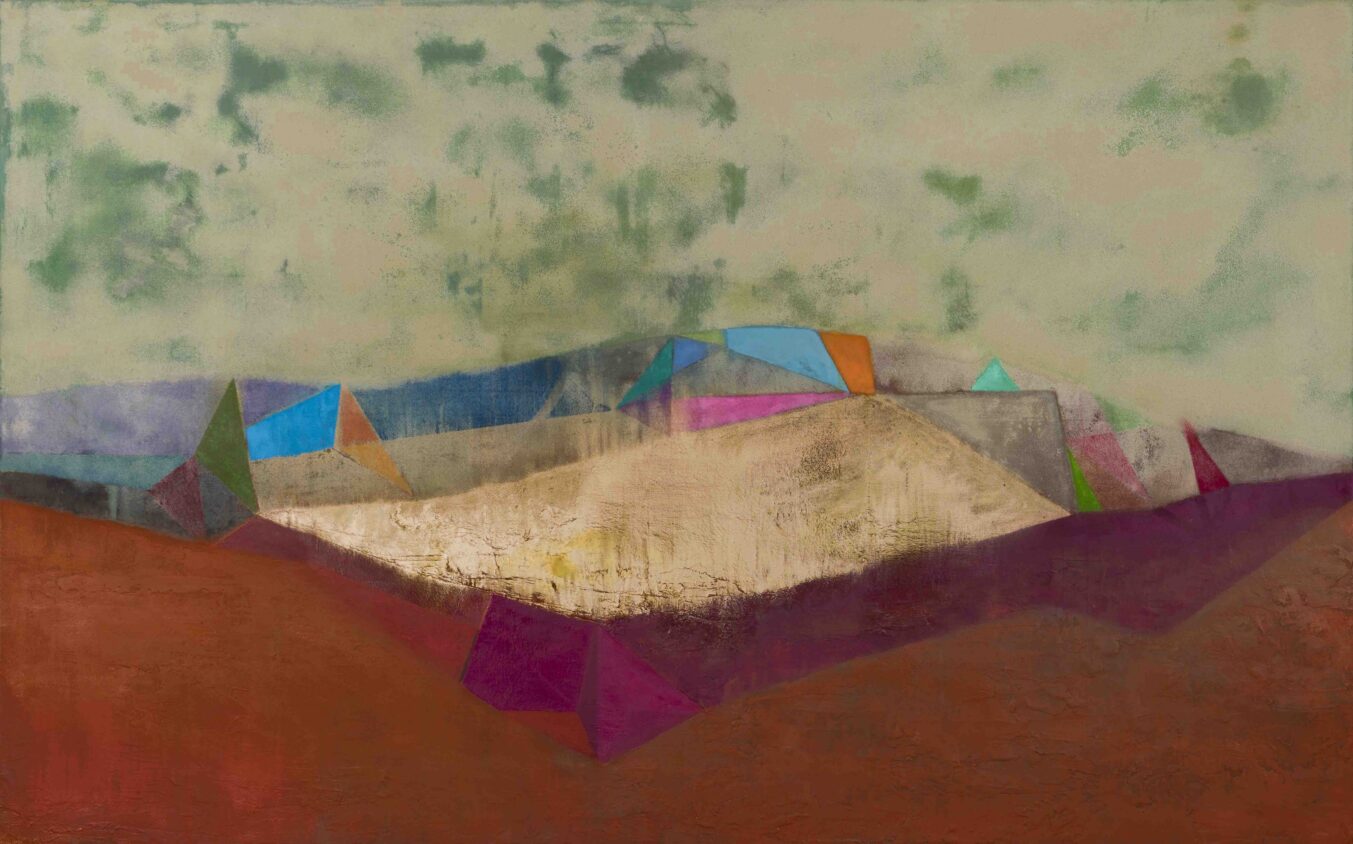 Tom Climent’s exhibition, ‘Latitudes’, at Dunamaise Arts Centre, Portlaoise, was described in the gallery text as “investigating the boundaries between abstraction and representation”. Climent presented twelve roughly similar landscapes featuring a central mound, peak or outcrop on a slightly higher-than-centre horizon line. While these compositions fall within the recognisable tradition of landscape painting, the artist’s synthetic colour palette, along with occasional architectural additions, serve to unsettle the familiarity that the genre normally fosters. Perhaps Climent’s expansion of this disciplinary boundary is less focused on stylistic approaches and more concerned with how the viewer rationalises personal expectations of painting. It helps that they are beautifully executed and bridge real and imaginary worlds. Climent’s disorderly arrangements of planes, vertices and edges are softened by his hand-drawn outlines, textured surfaces and luxuriant use of colour.

The pictorial format employed in Adamant (2017), brings to mind a ringfort formation. Being so familiar and numerous within the Irish landscape, ringforts are almost invisible, appearing merely as hilltops that seem oddly different from the land around them. Adamant depicts a primitive dome-shaped dwelling or similar structure. Its irregular form is painted in vivid planes of deep red, vermillion, pink and, occasionally, lime green. The sky is an expanse of opaque cerulean blue. The surrounding hill is mossy and sage-coloured, as sunlight filters down onto the foreground, suggesting the rising dawn. Energy radiates from the strange hybrid psychedelic structure, yet it seems perfectly conceivable that it might have grown from the remains of an early medieval ringfort. Climent describes his painterly approach as “largely intuitive”, with painting triggering the discovery of “unintended connections and relationships.” Caprock (2017) resembles a burial mound located in a flat upland position, rather than on a hilltop. Climent presents a slightly flattened isometric view, allowing the front elevations and foreground to be shaded from ambient light, illustrated through blocks of violet, purple, maroon and brown. The vertices and points of intersection are more cleanly defined, while the flat areas are more textured, revealing layers of underpainting and plaster. Over these coarse areas, patches of luminous colour brighten the scene, despite a dull sky. In this way, Climent manages to avoid the risk of over-boiling his intense colour range or overreaching the narrative between his key influences of archaeology and science fiction.

The rock formation depicted in a larger work, Berg (2017) slides at glacial pace from the horizon as it’s bulk casts a deep shadow on the hillside. Conversely, in Mountain Mind (2017), liquid matter spills from a huge opening in the mound, flooding the ground around it. The relationship between the subject and this sense of continuing motion serves to widen the narrative possibilities beyond the picture plane. This interaction also reveals the technical and conceptual struggles between being faithful to intuition (without over indulging) and producing good painting.

Two works, Alfuen and Gimle, presented side-by-side in the gallery, more explicitly disclose how personally compelling the making of this work might be. Both paintings comprise sharply pointed mountain peaks whose apexes are hewn with the same distorted harlequin edifice. The downward slopes that fall away from the peaks gradually soften into a more natural appearance. The viewpoint is paradoxical, only possible by being elevated in flight. There is a sense that these mountain peaks stem from innate memory or knowledge – in the way that ringforts are involuntarily etched onto the collective Irish consciousness. Sometimes a sense of familiarity has no identifiable origin, while ideas are unbound by pure representation or abstraction. These intangible qualities permeate the materiality of Climent’s painting. His compositions are neither wholly real, nor completely fictional and most importantly, they offer no easy resolutions. His work remains open, generous and evolving, demonstrating great investment of skill and vision. By neat coincidence, the arts centre’s namesake, the Rock of Dunamaise, stands less than five miles away, surrounded by the seven hills of Stradbally, so I imagine that local audiences actually felt very at home looking at this work.