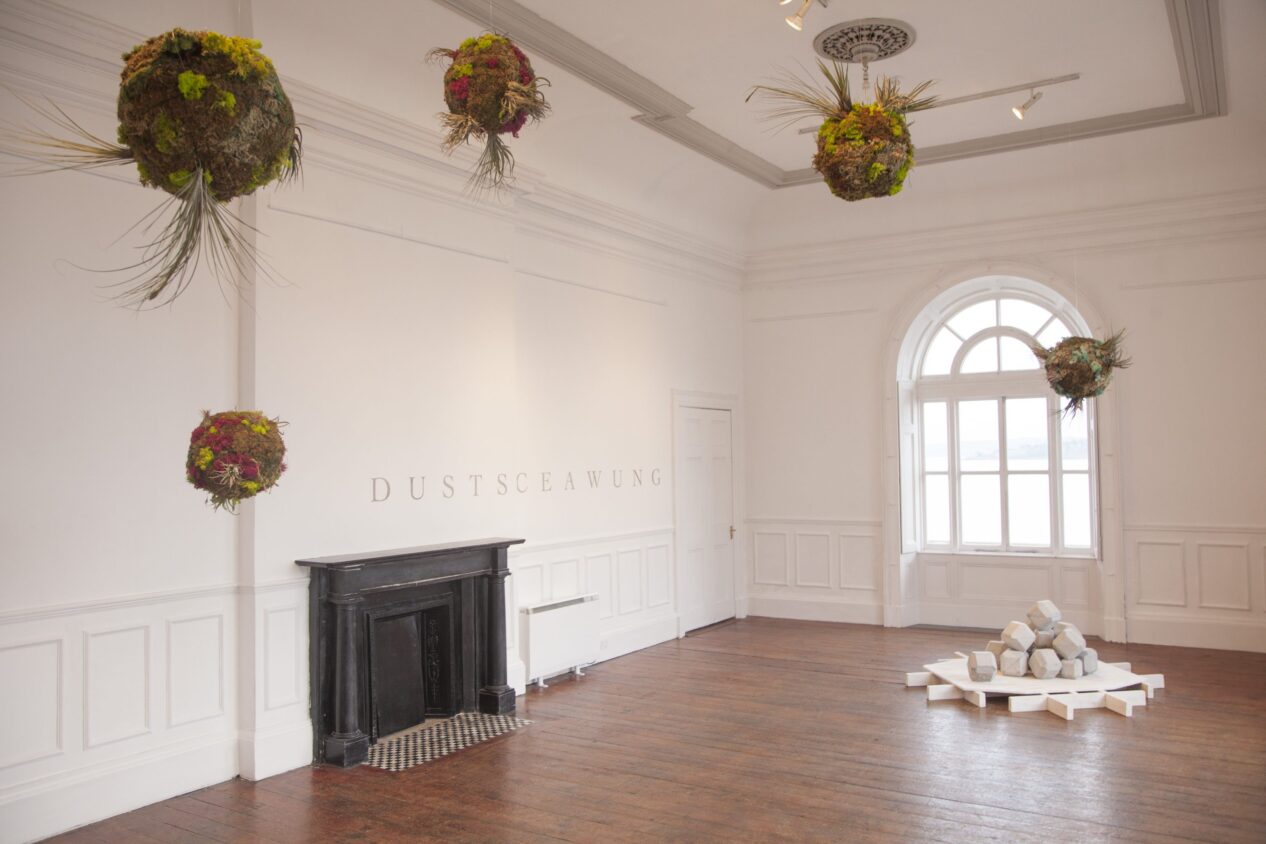 ‘Sustainable Futures’ is an ambitious exhibition currently showing at Sirius Arts Centre, Cobh, County Cork. The show acts as a focal point for a multifaceted collaborative project bringing contemporary art practice into dialogue with scientific research on sustainability, through a series of talks and events involving artists, the scientific community and local youth groups.

Upon entering the East Gallery, the first thing we encounter is David Thomas Smith’s large-scale aerial photographs of the Chrysler factory and Silicon Valley, taken between 2009 and 2010. These are Google Map composites, developed using a meticulous process that works against the low quality of the source material. Smith has photographed tiny sections of the Google Map images, reconstructing them like a jigsaw, so that the images stay sharp as the scale is increased. With a background in documentary photography, the artist shows us detail that wouldn’t normally be visible. The photographs deal with the concept of the ‘Anthropocene’ – referring to the geological age of mankind who, in one hundred years, have affected the natural world more drastically than natural processes have in 1,000 years.

Continuing the theme of protracted and accelerated time, are new works by Sarah Lincoln including Skin Contact (2017), a series of eight wall-mounted pottery plates. Some of the surfaces incorporate spiral patterns, which makes them look like fossils or archaeological remnants. Despite having the appearance of relics from the past, these objects are spray-painted in futuristic silvers and golds, causing them to oscillate between the past and the future. Interestingly, these forms are actually cast from the plates used to spin pottery and therefore point towards the origins of craft, as well as to the ground from which future clay will emerge.

Upon entering the West Gallery, we are met by the vibrant pinks and vivid greens, which punctuate the earthy tones of Méadhbh O’Connor’s Biosystem (2018) – a sculptural installation of hanging globes comprising preserved and living moss and various air plants. The installation references the Gaia hypothesis, initiated by British environmentalist, James Lovelock, in 1965. Lovelock’s theory posits that the earth is one large superorganism capable of regulating itself and that human beings are connected to everything else within this living system. O’Connor’s installation suitably demonstrates this hypothesis, given that the art objects are actually living organisms and will only survive the duration of the exhibition if they are cared for.

O’Connor’s hanging globes lead the eye down towards Fiona Kelly’s The Distillation of Detritus (2015 – 17), a pile of reconstituted blocks, sitting atop a wooden platform. Kelly has reappropriated waste from demolition sites in order to create a perfectly formed stack communicating ideas of both destruction and waste, but also renewal and life, based on the cosmological premise that all matter comes from and returns to dust. On the adjacent wall is the word Dustsceawung written in limestone dust. This Old English word denotes the transience of all things and the contemplation of what has been lost, literally meaning a ‘consideration of the dust’. It offers a poignant final reflection on the exhibition and a subtle warning of the precariousness of our own position if we do not find ways to live more sustainably.

‘Sustainable Futures’ is an extremely promising curatorial debut from Claire Ryan, who ambitiously suggests that art can act as a conduit for raising awareness about environmental concerns. This proposition is all the more convincing given the visual seductiveness of the exhibition, with its paired back formalism, drawing the viewer in to face the most pressing issues of our time, in a way that cleverly manages not to overwhelm. Ryan demonstrates a heightened sensitivity both to her subject and to the practices of the four artists involved. Brought together through a shared interest in environmental themes, the artworks resonate with each other as separate but integrated elements of the whole, embodying the overriding message of the exhibition – that we are intimately connected to all living things and can affect the future of the natural environment, for better or for worse.

Kirstie North is an art historian and independent curator who lectures at University College Cork.