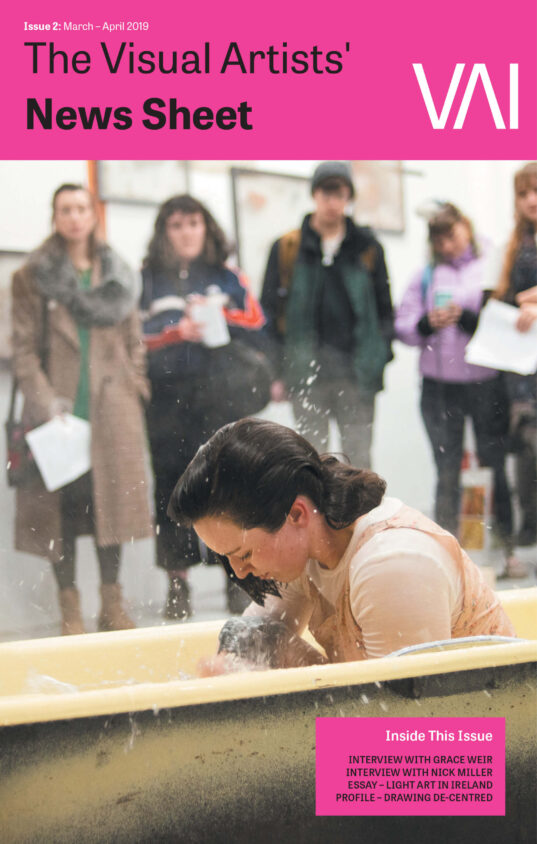 The March/April issue of the Visual Artists’ News Sheet is out now.

In columns for this issue, Sarah Durcan outlines her ongoing research project, ‘The Memory-Image’, as well as a related screening event at the Irish Film Institute in January. Sara Greavu discusses the evolution of CCA Derry’s dedicated reading group, booksvscigarettes, which aims to bring concentration and care to a range of texts, through the attentive act of communal reading. The Skills Column for this issue comes from James L. Hayes, who discusses experimental casting processes, technologies and materials, as well as the most recent iteration of his ongoing ‘Iron-R’ project. Reflecting on the many uncertainties currently facing artists in Northern Ireland, VAI NI Manager Rob Hilken outlines the challenges of the new social security payment, Universal Credit.

This issue features several interviews with artists whose exhibitions are currently showing nationally or internationally. Joanne Laws interviews Nick Miller about the evolution of his painting practice and his exhibition, ‘Rootless’ – currently showing at Art Space Gallery in London – while Chris Hayes speaks to Grace Weir about her current exhibition, ‘Time Tries All Things’, at The Institute of Physics, London. Both exhibitions run until the 29 March, Brexit day, after which time the shipping of artworks to and from the UK is likely to become more complicated. In addition, Andrea Neill interviews Martina Coyle about her upcoming exhibition, ‘Paradise Is Too Far’, which will open on 30 March at Áras Inis Gluaire Gallery, Belmullet, County Mayo.

Recent Sligo IT graduate, Hazel McCrann, discusses her art practice and her recent show, ‘Peripheral Visions’, which ran at the Hyde Bridge Gallery, Sligo, as part of her Graduate Solo Exhibition Award. Melissa O’Faherty and Kiera O’Toole explain the evolution of the Irish contemporary drawing collective, Drawing de-Centred, while Tobi Maier discusses his recent curatorial residency at The Glucksman and his stay in Carraig-na-gcat, County Cork. In her extended essay, entitled ‘Seeing the Light’, Renata Pekowska reflects on several recent exhibitions across Ireland dedicated to the medium of light. In the Artist Publishing section, Annabel König discusses two of her recent publications, which use Maslow’s ‘Hierarchy of Needs’ as a point of departure.

As ever, we have reviews of recent exhibitions, details of the upcoming VAI Professional Development Programme, exhibition and public art roundups, news from the sector and current opportunities.