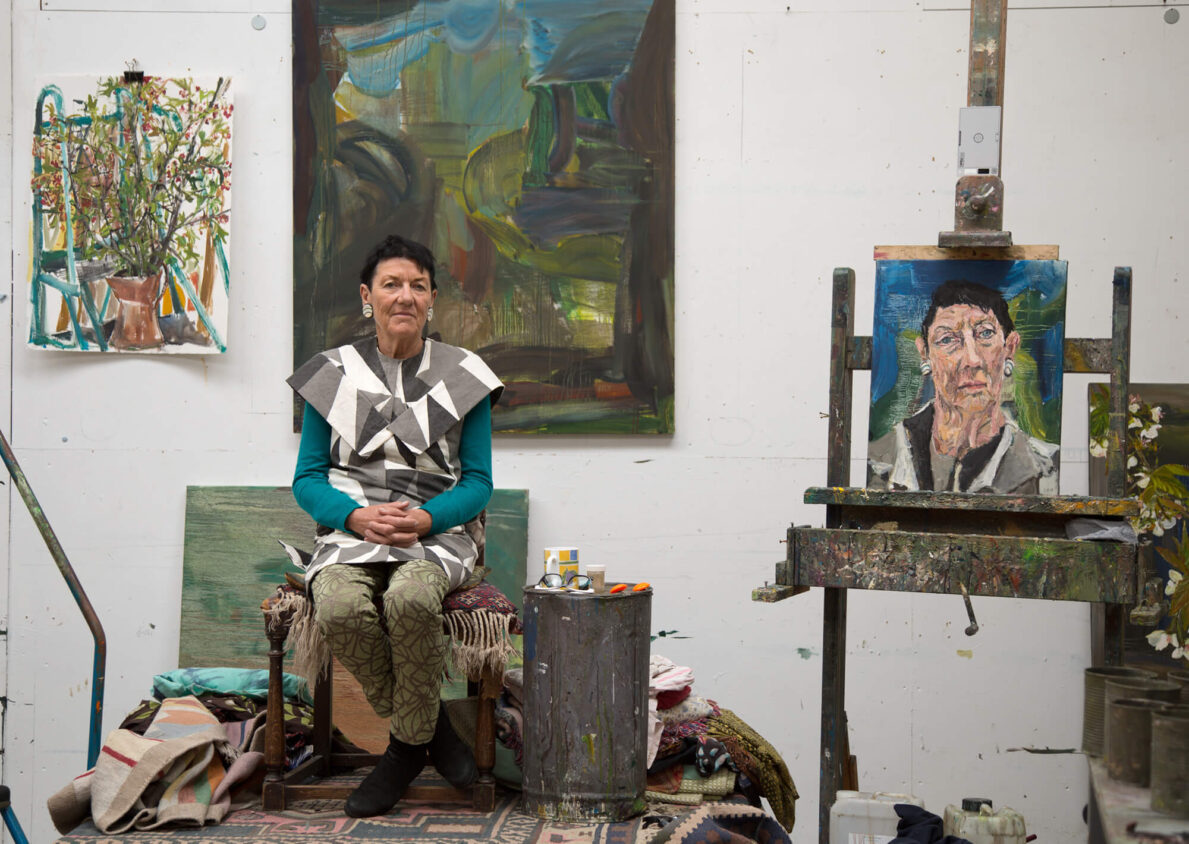 JOANNE LAWS INTERVIEWS NICK MILLER ABOUT HIS PAINTING PRACTICE AND HIS CURRENT EXHIBITION IN LONDON.

Joanne Laws: The term ‘Encounter Painting’ is commonly associated with your work. I guess this relates to things happening in your daily life and how you respond to them?

Nick Miller: Not really, it’s more formal than that. Back in 1988, still in my late-twenties, I had a kind of eureka moment about what art could be for me while on a residency in Dublin Zoo. I began to draw from life again, facing the otherness of animals in captivity. It became about meeting and holding contained energy through the act of drawing. It coincided with my reading of Martin Buber’s extraordinary book, I and Thou 1. This helped frame my interest in trying to hold the life that I encountered in the material form of art. Since then, my practice slowly evolved to be one of setting up the conditions necessary (in the studio or outside) to encounter things – a person, landscape, or object – in a practice environment where there is also the best possibility of making a painting.

JL: I remember a kind of eastern influence manifesting in your work in the mid-90s. Was that through your engagement with Tai Chi?

NM: Yes. It followed on directly from starting to define that sense of ‘practice’ but was a parallel learning system. In the ‘90s, I was lucky enough to study in America with a friend of Alan Watts, Chungliang Al Huang.2 An aspect of his teaching was very visual, using calligraphy as embodied physical movement. It gave me a way into that world of integrating eastern thought into a very western rooted art practice. You may remember from my teaching in the life room back then, that I used to get people to do physical movements and breath work, to try and wake up. Painting from life is a most literal ‘mind-body’ activity – absorbing information from outside, processing internally and releasing into the material of paint. Taoist thought offers a non-linear, spherical kind of approach, where the result is almost a fortunate ‘left over’ from your commitment to practice.

JL: In your engagement with the archetypes of painting – landscape, portraiture and still life – are you are grappling with the medium to make this territory your own?

NM: Yes, I suppose I am. We all look to enter art and hopefully find something authentic. A lot of the time – and I know, because I’ve taught in art college – education tends to iron out ‘wrongness’, so that artists can perform in a professional ‘art world’. I never got ironed out, so I used my ‘wrongness’ to make work. I could just say that I’m an old fashioned ‘life’ painter and leave it at that, but that wouldn’t be entirely true. In some ways, I’m not so interested in art. I’m interested – from necessity in the ‘art of living’ – with the problems of being a painter. Contradicting myself, I actually do have an enduring love for all those genres in the history of Western art. It is finding affirmation in the works of very different artists, in paintings that for me are portals across time – repositories of contained energy – that completely absorb and charge me.

JL: Your sitters are often fellow artists and friends, like Alice Maher or Janet Mullarney, then some of whom have since sadly passed away – including Barrie Cooke, Anthony Cronin Seán McSweeney and John McGahern. When that happens, do you find that their portraits almost take on an archival function? Is this work about posterity?

NM: Not really, or not at first. I started by painting my family and friends – no one with a public life. Portraiture is my first love, and I continually return to it as the root of all my work. The most exciting encounter is of one human to another and in my own personal trajectory, I like to hold something of the people I’ve met. As I became rooted in Ireland and the relatively accessible artistic community here, paying respect to those artists, writers or anybody who ends up sitting for me, is something I like to do. In truth, I feel most real when painting – that is the best of me – connecting to them. As people die, as we all do, I suppose the paintings can become a historical record, but I can’t have that as a goal – it gets in the way. I am not an archivist.

JL: Where ‘Vessels: Nature Morte’ reflects the utter collapse of meaning that happens when someone dies, your most recent series, ‘Rootless’, seems to transcend individual loss to focus more on the collective and the political. Can you discuss the evolution of this new work?

NM: My last still life series, ‘Vessels: Nature Morte’, had a deeply personal energetic core from a long collaborative project in North West Hospice, and the parallel passing of my own parents. For me they were the opposite to the “collapse of meaning”. They were about holding the last moments of life and meaning before it left. After that work, I was somewhat lost in the studio, wanting dialogue, but unable to find the people or conversations I needed to have. Like many of us, I was trying to process this crazy world that we’re all having to live with – the political mayhem that we seem to be generating on the planet, the climatic mayhem, the migratory suffering – all this stuff we are facing. In a fairly intense period in 2017-2018, I began processing that lack of dialogue in my own way, in the large-scale canvases that became the ‘Rootless’ paintings. They took on a life of their own, asserting the urgency of nature. I was exploring disorder and the possibilities of integration in more complex compositions, some of which I showed at the Oliver Sears Gallery in Dublin last year, but are currently being shown more completely at Art Space Gallery in London.

JL: I also remember your ‘Truckscapes’ with great affection. At what point did you decide to include the ‘viewing device’ of the doorway within those compositions?

NM: The first couple of years in the mobile studio, I couldn’t find a way to paint. I was really high, enjoying the mad freedom of being in the landscape, meeting the rural world in which I was living, but there was a dissatisfaction in me – they just looked like ‘pictures’ that did not need to exist. I had been scraping off paint, correcting things and it was starting to dot around the truck doorframe. And then in 2001, while working on a painting of a Whitethorn tree in a neighbour’s field, I radically re-worked the painting to include the truck interior and the paint-spattered doorway looking out onto the tree, like a standing portrait.3 My experience became defined by the protection of the truck as a studio, of culture with a relatively narrow doorway to the infinite world of complexity outside – as a tortoise in my shell. I realised these were not landscapes, but ‘Truckscapes’. I began to adjust my practice of making them in the context of the truck view, and that’s how they became something real for me, as paintings of land, trees or whatever.

JL: Many people recognise your muted and organic colour palette as being particular to your work. Does it come from living in the west of Ireland?

NM: Basically yes… It is muted in an adjustive way, starting with a very broad palette (contrary to any advice I would ever give anyone). You’re trying to coalesce something into being, but the colour comes from nature. It is something to do with the light here. My studio is a warehouse with dirty, natural, overhead light. I’m trying to hold life – not commemorate it but hold it in the present – through a kind of alchemy. Through training, I work at an intense and surprisingly fast pace that suits my temperament. I’ve learned to relate it to focus in sport.

JL: Do you drink Lucozade Sport while painting?!

NM: I’m trying to reduce sugar intake! Having taken up tennis as a first ever sport at 48 after a life of indolence, now it is taking over. After 10 years playing, I have competed for Connacht at Inter-Provincials, and at that level I am mostly losing with determined style. The concentration needed is similar to painting – a sustained attention, but on a yellow ball. Now I’m also swimming every morning in the sea – mainlining nature through cold water. I’ve become an addict. My partner Noreen describes it as my daily electric shock treatment, which is not far from the truth. It resets mind and body, until I return to my normal zombie-like self by the end of the day, catching up on Netflix or Brexit. My show in London ends on 29 March. Since I was born there and, after 34 years finally becoming an Irish citizen, it seems morbidly symbolic to me that my show is ending on Brexit day.

Nick Miller is an artist based in County Sligo. His exhibition, ‘Rootless’, continues at Art Space Gallery, London, until 29 March.
nickmiller.ie
artspacegallery.co.uk

Feature Image:
Janet Mullarney sitting for Nick Miller in his studio in 2017; photograph courtesy of the artist