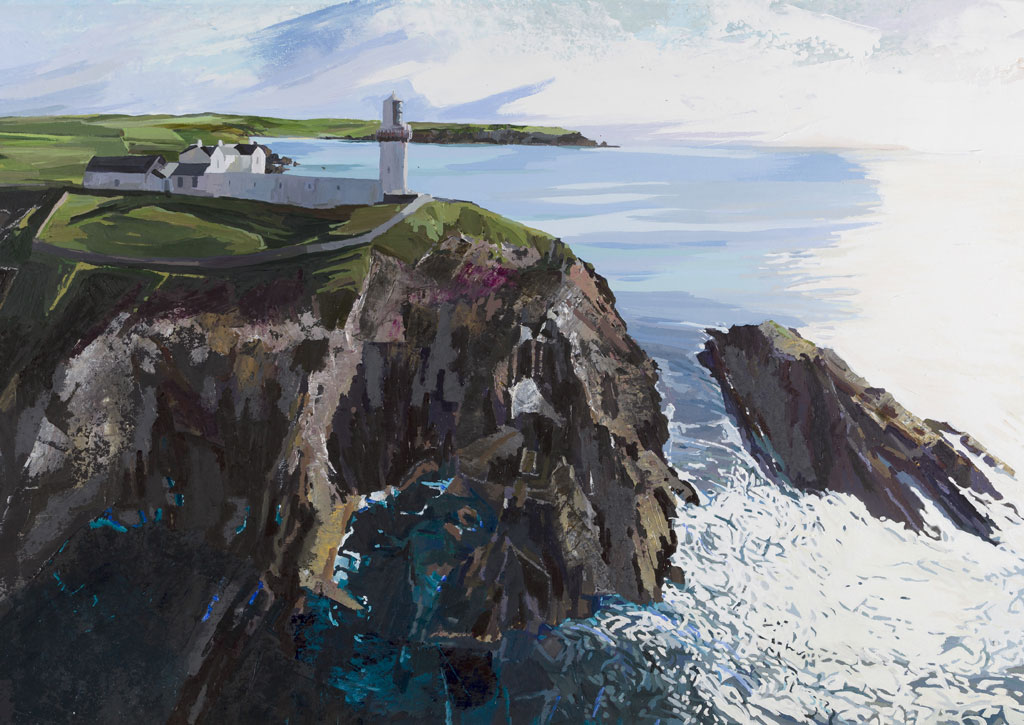 The crisp depiction of County Cork’s Fastnet Lighthouse – tall and erect yet submerged in a sea of blue – opens Geraldine O’Sullivan’s exhibition, ‘Light Keepers’ at Uillinn: West Cork Arts Centre. As one of 14 artworks on display, this painting immediately anchors the viewer in what unfurls as a world of green gushes, titanium white surf and brilliant blue horizons.

O’Sullivan’s paintings are accompanied by 11 mixed-media collages that act as visual documentation of the information, stories and anecdotes the artist has encountered since commencing research into the history of lighthouse keeping in Ireland, over three years ago. Hung in a traditional style along the four walls of the ground-floor James O’Driscoll gallery, the works seem to gently enshroud the viewer. This sense of enclosure, combined with the brilliant white walls and the double-height ceiling, serendipitously seems to simulate a lighthouse interior. However, the lighthouse structure itself is only a minor component of these artworks. O’Sullivan is also concerned with the lives of the individual ‘light keepers’, as evidenced in her collaged works.

The artist refers to these collages as “lifescapes” which aim to capture the keepers’ lives – based on old photos and memorabilia given to her by their families – while creating narrative through the various connections between imagery. For example, in Semaphore, black and white photographs of happy lighthouse children are juxtaposed alongside a smiling, cherubic girl advertising ‘Brasso’ metal polish, and a woman in old-fashioned dress demonstrating flag signals. A painterly rendering of Rockabill lighthouse is central to this small, intimate composition of memories.

The exhibition is accompanied by a short film that provides the ‘Light Keepers’ with historical context, thus foregrounding an ‘archival impulse’ – something American art critic Hal Foster described as the desire to “make historical information, often lost or displaced, physically present” .1 With modernisation, lighthouses in Ireland are no longer manned, so the world that the artist is reflecting upon is now essentially a lost culture. This archival impulse was also evident during the artist’s talk at the gallery on 16 March, when O’Sullivan’s work served as a backdrop to the anecdotes of her guest, Galley Head lighthouse attendant, Gerard Butler. As a third generation ‘keeper’, Butler’s lively reminiscences seemed to emerge from and embed themselves in the artworks that surrounded him.

Interestingly, a large acrylic painting, The Morning After the Storm, is actually based on Butler’s memory of the aftermath of a particularly cruel storm, now preserved in paint by the artist. The painting’s foreground is devoted to capturing the unusual qualities of the ‘green water’ observed by the light keeper that day. In isolation, it is almost an abstract pattern of green and grey swirls, sitting on a pool of deep Prussian blue. Surging from the left, the swell collapses into a white foam, as it meets the cliff edge to the right of the foreground. Emerging from the water to occupy the top half of the composition, is the rugged rock of Fastnet lighthouse. Slit-like marks of varying intensity indicate the harsh, jagged realities of its form. The intense pattern of water that floods the painting’s foreground is juxtaposed with stacks of marks, compacted to create a craggy rock, allowing little space for the eye to rest. The lighthouse keeper’s staggered feeling on the morning after the storm is cleverly evoked by the painting’s composition.

Another large acrylic painting, The Cliff Divers Perch, is notable for its design. O’Sullivan’s research involved accessing drone imagery of the lighthouses and their surrounding areas, providing her with unusual reference imagery on which to base her compositions. Again, the composition teeters on abstraction, as the viewer is positioned at a cliff edge with the sea opening out below the rock underfoot. As such, ripples of blue replace the sky, while yellow ochre drips from the rock, as it drops down from the foreground into the watery pool. This exhibition showcases the artist’s vast painterly skill, as much as it highlights the fading culture of lighthouse keeping in Ireland. O’Sullivan’s ‘Light Keepers’ offers the viewer a fresh visual archive of an outmoded way of life.

Sarah Long is an artist and writer based in County Cork.