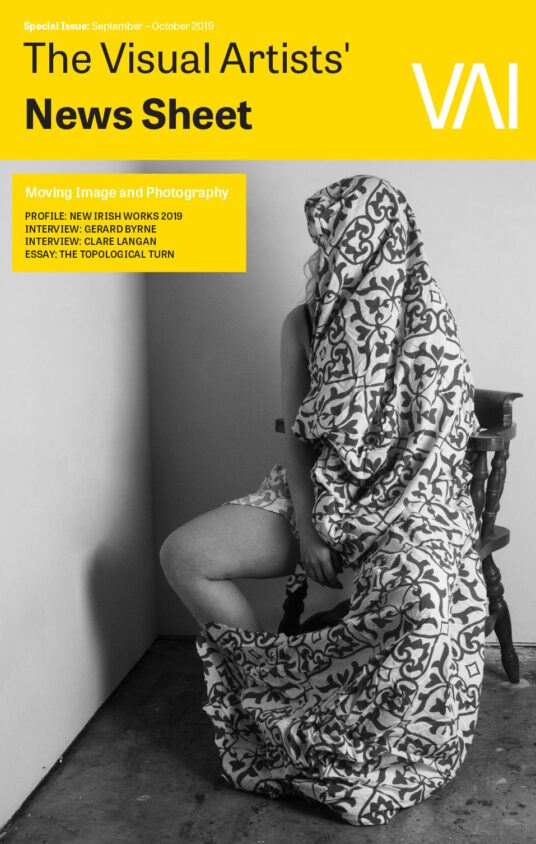 VAN’s 2019 themed issue focuses on contemporary Irish photography and moving image, probing the expanded parameters of each medium in the digital age. With an abundance of image-making technologies now readily at hand within our daily lives, this issue considers how static and moving images are created, disseminated, consumed and stored. In technical terms, it has never been easier to produce images; however, some argue that with the plenitude of media now available, it is becoming harder to create images that are culturally relevant or interesting.

As evidenced throughout this issue, such inquiries manifest in current artistic practice through rejections or subversions of digital technologies. This includes a resurgence of analogue production and presentation formats, leading to the creation of deliberately flawed images, which sit in opposition to the ‘non-reality’ fostered by digital post-production. In addition, many artists are engaged in a ‘reassertion of objecthood’, often involving the assemblage of pre-internet material, including printed matter, found photographs or archival footage. This, in turn, creates physical repositories of knowledge, with the space of the exhibition – characterised by non-linear, sculptural or immersive installations – being pivotal to encounters with lens-based work.

This issue features two specially-commissioned essays: Alice Butler provides a survey of contemporary Irish moving image practice; while Justin Carville outlines the significance of ‘place’ in Irish photography. This issue also profiles Irish organisations, such as the production facilities, The Darkroom and Digital Arts Studios, and the Gallery of Photography Ireland. Recent film screenings are profiled – namely ‘Snapshots’ at Dingle International Film Festival and aemi’s recent touring film programme, curated by Sarah Browne – as well as prominent photography and moving image exhibitions, including: ‘The Parted Veil’ at The Glucksman; ‘New Irish Works 2019’ at PhotoIreland Festival; and ‘Screentime’ at the Green on Red Gallery.