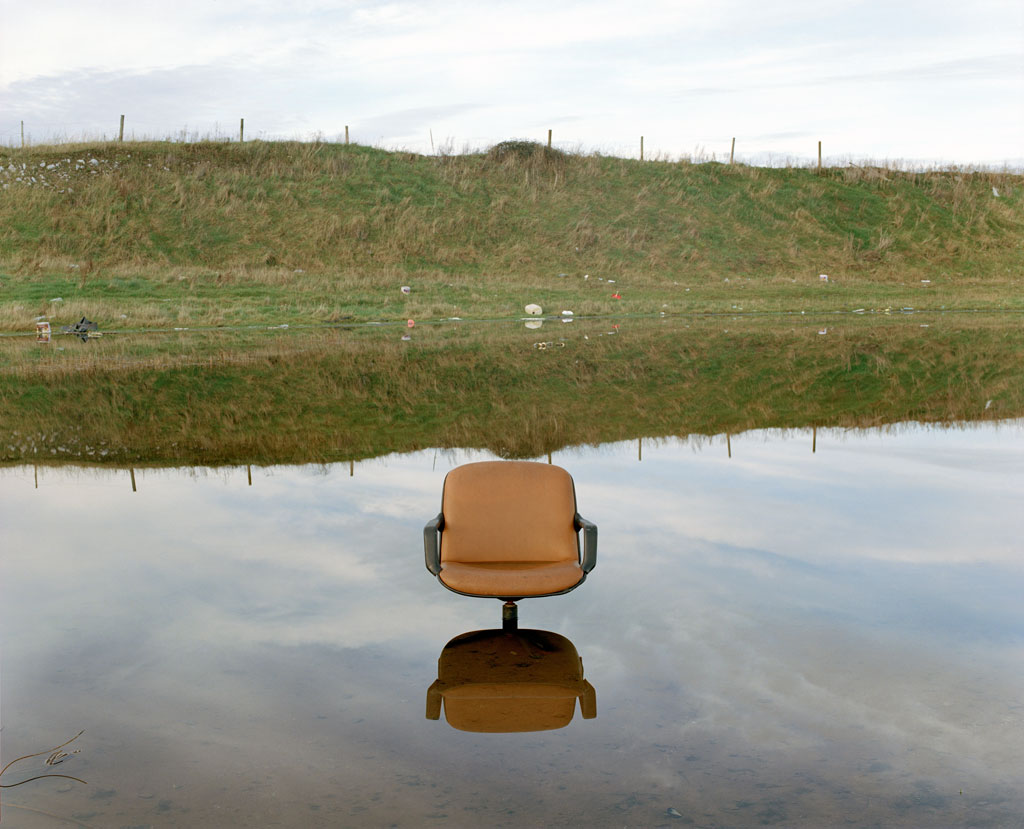 The presentation of ‘New Irish Works 2019’ at the Museum of Contemporary Photography – a pop-up space located in Dublin Castle, as part of this year’s PhotoIreland Festival – provides a brief snapshot of the variegated practices of contemporary Irish photography. The diverse projects exhibited in ‘New Irish Works’ range from the personal and the political, to the investigative, formal and conceptual. Phelim Hoey’s ‘La Machine’, for example, explores his diagnosis with Multiple Sclerosis through diaries, sculptural forms and motion studies that reference the anatomising and visual abstraction of technology, modernism and the body in the work of the French scientist and photographer, Étienne-Jules Marey. Dorje de Burgh’s ‘Dream the End’ – a work of mourning, loss, and memory – interrogates his own familial archive as a sort of imaginative, open-ended and unresolved link between the past and the present. Rósín White draws on found photographs and archival materials to explore the legacy of psychiatry through Silas Weir Mitchell’s late nineteenth-century ‘Rest Cure’ therapy, as a treatment for hysteria and nervous illnesses in women; while Sarah Flynn’s ‘Uinse’ combines still life, landscape images and detailed studies of human hands to explore nature-society dualism, through the fungal disease affecting Ash tree forestation in Ireland.

The range and scope of projects in this timely survey also reflect the transnationalism of Irish photography, both in terms of photographers living and working in the UK and Europe, and Irish photographers pursuing projects that resonate outside of the island of Ireland. Zoe Hamill’s ‘A Map Without Words’, draws together still life images of archaeological objects, portraits and photographs of specific locations to investigate her homeland and the place where she now finds herself located, in a series exploring the psychic relations between image and place that resonates with Victorian folklore and antiquity. Aisling McCoy’s series, ‘and live the space of a door’, explores the historical and political legacy of Berlin’s former Tempelhof airport, now repurposed as a refugee shelter through its banal spatial and architectural configurations; while Robert Ellis’s ongoing project, ‘Proverbs’, focuses on the people and landscapes of the former British protectorate of Uganda.

As a microcosm of contemporary Irish photography, ‘New Irish Works’ evidences a broad spectrum of investigative and conceptual strategies, forms of display and technical inscriptions of photography as a medium and form of representation. The identification of an overarching theme, subject, aesthetic or visual strategy is thus difficult to discern. However, McCoy’s and Ellis’s works both gesture toward the centrality of place, belonging and the everyday bodily interactions with natural and built environments, which has featured prominently in Irish photography for the last decade. This turn to ‘place’ is not something that should be taken frivolously. Place is not simply about fixed geographic location, or the abstract contours of physical spaces; it is also about the material environments of social relations, amongst and between individuals and communities. For the last decade, much of Irish photography has not so much focused on the representation or the objective appearance of physical locations, but on conveying subjective interactions and attachments to place. It has focused on transmitting the quotidian bodily interactions with and within emotionally, culturally and socially resonate places.

The concern with place in distinction to space in recent Irish photography, and the routine interactions of communities within everyday environments, has marked a social and ideological shift – particularly within prominent work made during the two decades either side of the millennium. In what might be termed the ‘topographical turn’ of Celtic Tiger and post Celtic-Tiger Irish photography, the emphasis became the spatial reconfiguration of urban and suburban Irish landscapes. In series such as Dara McGrath’s ‘By the Way’ (2003) and Martin Cregg’s ‘Midlands’ (2009), the boom-era landscapes of speculative property developments and partially-built ghost estates (the most immediate material ruins of financial collapse) refracted back to the viewer the accelerated transformation of the Celtic Tiger period, through its visible spatial forms. In this work – and that of numerous other photographers of this period – the transformation of Ireland through global capitalism was measured in the spatial transformation of cities and towns as degrees of what Marc Augé defined as ‘non-places’. Emphasising the rectilinear forms and muted hues of the newly-built environments of business and retail parks, motorways and housing estates, the detached topographical gaze of photography from this period depicted the emerging boom-time landscapes as a peopleless spaces. Devoid of human presence, configurations of the Irish landscape through property development were represented as hollowed out, indistinct, transient spaces. They forged a perception that emphasised the inauthenticity and anonymity of social relations with what the phenomenological geographer, Edward Relph, described in the late 1970s as ‘placelessness’ – the distinctive eradication and standardisation of landscapes.

Amid the global financial collapse of 2008, projects such as Simon Burch’s ‘Under a Grey Sky’, Eoin O’Connaill’s ‘Common Place’ and Jakie Nickerson’s ‘Ten Miles Round’ emerged, which demonstrated a shift in Irish photography from the ‘absence of presence’ to the ‘presence of absence’. Empty landscapes, devoid of people, were a consistent aspect to this work; however, these landscapes were portrayed as imbued with the signs of human presence, marked in the traces of everyday use of landscapes, temporarily suspended in anticipation of the return of human interactions with built or natural environments. These photographs were also accompanied by portraits – some formal in spaces seemingly distinct from the landscapes, others more informal in their depiction of individuals or groups, either in domestic settings or interacting with the everyday social landscapes depicted in the photographs.

Burch’s series, ‘Under a Grey Sky’, for example, focused on the hinterlands of industrial peat harvesting. Photographs of the sometimes dark, brooding peat-scape are accompanied by a series of portraits taken mostly in workspaces or domestic interiors. There is no formal regularity to Burch’s portraits. Some are positioned directly in the centre of the frame, while other subjects are decentred from their domestic environments, shown with pensive expressions. Mandy O’Neill’s 2016 project, ‘Promise’, uses a similar approach. O’Neill carried out ‘Promise’ during a four-year period in Gaelscoil Bharra, in Dublin’s northside, as the school waited for its dilapidated pre-fabs to be replaced by a purpose-built new building. The project combines photographs of the school’s eroding interiors and temporary facades with portraits of schoolchildren. However, unlike Burch’s portraits, O’Neill’s photographs of the pupils have a regularity in the formal organisation of the pictorial space of the portrait, with the subject’s bodies positioned in front of a neutral background – the only exception being the portrait of a young female student in a conformation outfit. As with Burch’s project, O’Neill’s portraits seemingly detach the subjects from the environments that are the focus of the project. However, this strategy avoids place becoming a mere backdrop to the portraits, a sort of scenography against which the body is represented. Instead, the combination of portraits and empty environments – around Irish bog lands, in the case of Burch, or the decrepit, temporary architecture of school buildings documented by O’Neill – requires the viewer to work harder, to look deeper into the relationship between subject and place. This combination of environmental photographs and portraits works contrapuntally – as independent but related counterpoints to one another – asserting the relations of bodies and the sense of place projected in these artworks.

An alternative approach is evident in Linda Brownlee’s 2010 photographic series, ‘Achill’. Brownlee had a long childhood association with Achill Island. For the series, she worked with adolescents on the island, to identify their favourite places and how they wished to be represented in the landscape. In addition to photographs of the Achill landscape, Brownlee photographed subjects from a variety of perspectives that yoke between intimate formal portraits – in which the subjects dominate the pictorial space of the photograph – to images in which the young people are enveloped by the natural environment, or appear as diminutive bodies amidst the vast expanse of horizon that stretches into the distance. Bodily deportment is a significant aspect of Brownlee’s photographs; sometimes all that is visible is the back of someone’s head or a mop of hair blowing in the wind. In other images, the subjects look towards the horizon that is visible to the viewer, or they gaze out to the unseen landscape, beyond the pictorial frame of the photograph. The oscillation between forms of portraiture and bodily poses in the landscape, envision the dynamic relations between body and place; it projects a sense of the landscape, not as a mere backdrop to the formation of adolescent identity, but as a way of showing how their identity is given expression in and through place.

The continuation of the attention to place in Irish photography – as a dynamic arena of social interaction imbued with presence that shapes everyday identity and experience – is not only evident in recent projects, such as those exhibited in ‘New Irish Works’, but also in more subtle projects, such as Gerry Blake’s ‘Into the Sea’ on the bathing spots along the south Dublin coast, and more politically salient projects, such as Kate Nolan’s ‘Lacuna’ on the border town of Pettigo, County Donegal. As with the aforementioned projects, the concern is not the representation of geographic locations or discrete places, but the social interactions and everyday bodily relations that make place meaningful. All of these projects have involved long-term negotiations and relationships with communities and environments, to envision the deep, subjective entanglements between people and place. They require a more considered analysis on the part of the viewer, to allow the unfolding dynamics of body and place to emerge. This, in turn, reveals how photography can imaginatively envision emotional attachments with the most ordinary commonplaces, in which communities go about everyday life.

Justin Carville is a lecturer in Historical and Theoretical Studies in Photography at IADT Dún Laoghaire, where he is also Programme Chair of the BA (Hons.) Photography Programme.