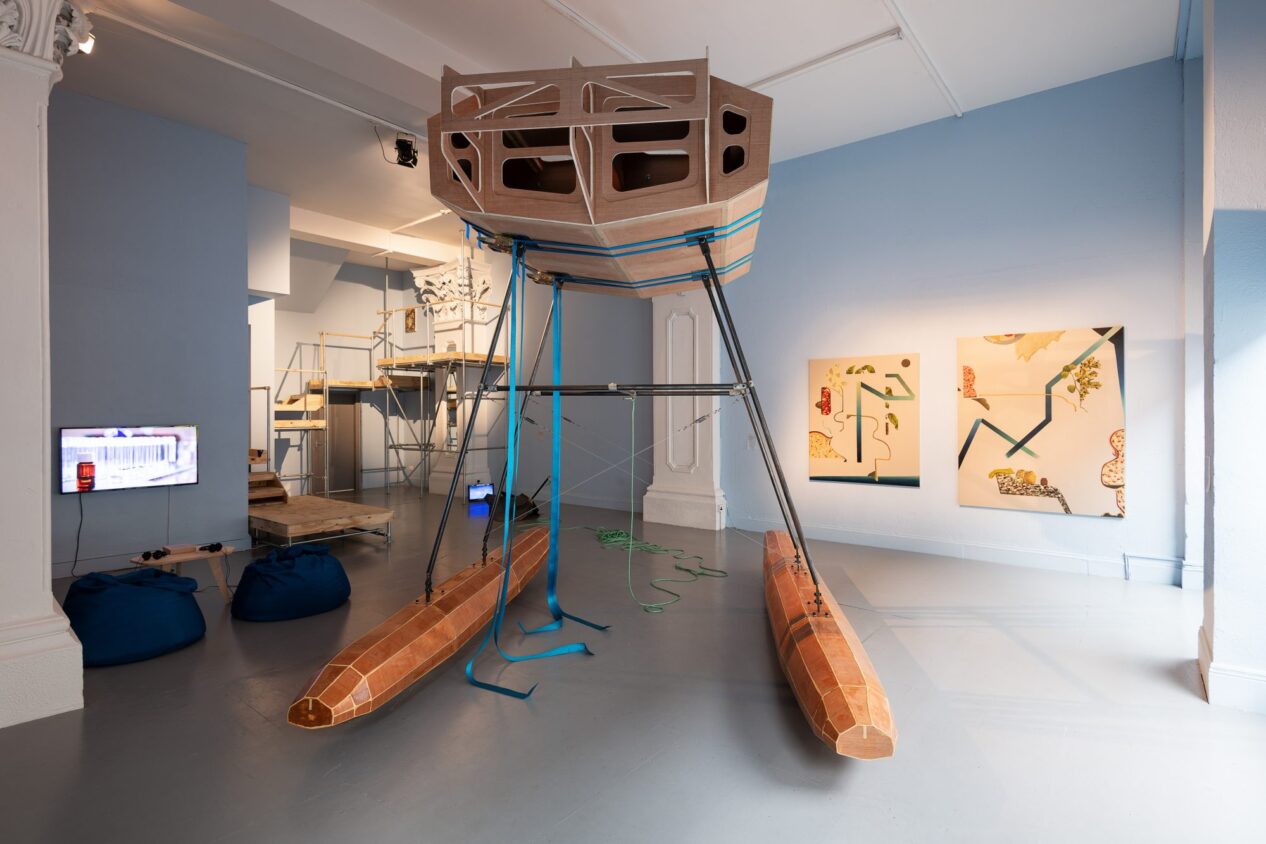 Having spent almost an hour visiting the exhibition, ‘Museum of Mythological Water Beasts’ (curated by Mary Conlon and Niamh Brown) I was happily joined by my international colleague, Mat Rappaport, a Chicago-based artist and curator who was holidaying in Ireland. Mat had given a riveting talk on his practice in LSAD the previous day and was keen to explore the vibrant Limerick art scene he had heard about in the States. We walked around the exhibition together and later discussed the merits of the show, which had captured our joint imagination, if for somewhat different reasons.

I particularly enjoyed the exhibition’s accumulative nature. As a long-running project – first initiated in 2016 and consisting of performances and interventions by exhibiting artists and project partners that run side-by-side – the exhibition celebrates the Shannon River as the heartbeat of Limerick city. Many of the exhibited works, most notably Chris Boland’s large-scale sculpture Cargo (2018), confront the city’s aquatic life, whether in the form of a once thriving boat-building tradition, or a future when such traditions may well flourish again. The museum’s ‘mythology’ is therefore double-edged, referencing those practices in danger of disappearing and those currently being reimagined by the exhibiting artists.

Ruth Le Gear’s Water Senses is one such example, which includes a single-channel video exploring the mythology and memory of water. A voice-over narrates across sublime footage of rural landscapes. This holistic study of water as a vital resource produced remedies based on traditions that have been lost with the advent of science. Depth by Andreas Kindler von Knobloch, Tom Watt and Tanad Williams takes the form of a staircase built into the gallery floor that is filled with Shannon water. It reflects light onto a nearby wall, creating a projected image evoking a calm river, but it is reflected from a flooded space. This majestic work challenges us to think of water as a revitalising and calming force that still poses an ominous threat in these environmentally-testing times. Moving through the exhibition space, one confronts Caimin Walsh’s glass box of curiosities, titled Display, which houses found objects taken from the River Shannon, in addition to a luscious ceramic sculpture, entitled Site, by Mary Conroy. While these pieces are curious and tactile, Ceara Conway’s siren-like Sinou reverberates, not intrusively, but just enough to add another layer of intrigue to an already interesting exhibition. In this regard, ‘Museum of Mythological Water Beasts’ offers a multi-sensual experience. Like the sea that connects diverse lands – as explored in Erika Balsom’s recent essay, An Oceanic Feeling: Cinema and the Sea (2018) – the river is invested with revitalising qualities, all the while encouraging a reevaluation of the importance of water for us.

Afterwards, Mat drew my attention to the stuff I’d missed: subtle architectural referencing and the smart use of scaffolding to generate dialogue around Damien Flood’s mesmerising paintings (meta-commentaries as such). Mat was excited by the way the curators had engaged the city in so many ways. Having since returned to Chicago, he captured the show’s impact, stating: “I was struck by the curatorial approach, which catalysed research, art and community engagement in a multi-disciplinary and seemingly approachable manner. It is a model that places the arts at a vital intersection in a living, working city, by centering the inquiry on a shared space: the river. In the States, we often talk about ways of engaging the public through institutions, as if the goal is to encourage more people to walk through the door. ‘Museum of Mythological Water Beasts’ provides an exciting model in which the artworks are an extension of a larger dialogue, simultaneously imaging fantastic methods of interacting with the rivers and its histories, while rolling up sleeves and cross-training the gallery workers in plaster restoration. As an artist and academic, I related to the impulse to make artworks, while supporting local communities and helping to improve the places in which we live.”

Dara Waldron is a writer and researcher based in County Limerick. He teaches at LSAD.

Mat Rappaport is an artist, curator and educator based in Chicago who teaches at Columbia College.