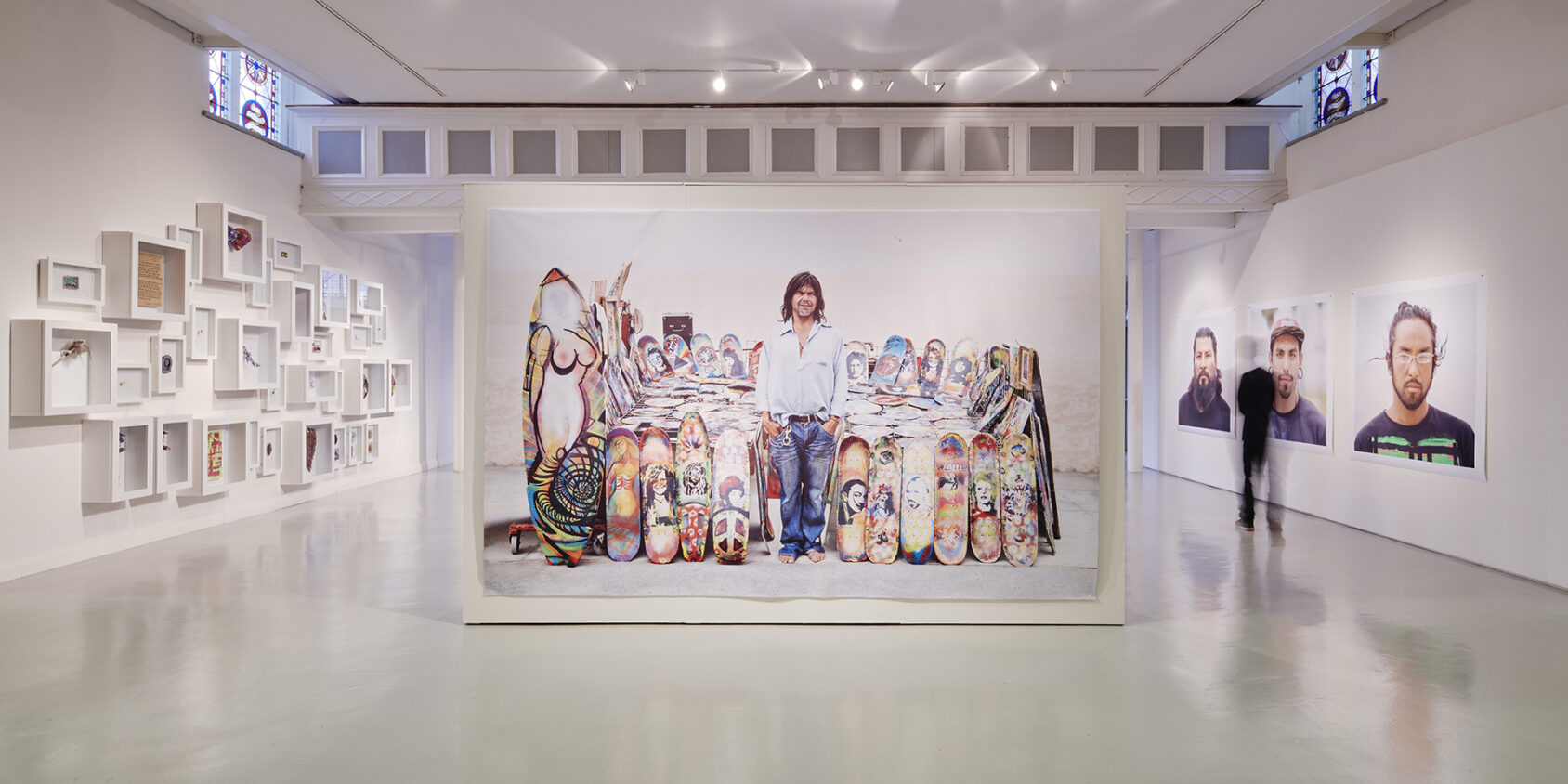 In the Highlanes Gallery, Theresa Nanigian presents a crowd-pleasing show, peppered with many different faces and voices, each expressing individual experience and cumulatively communicating a universal humanity that is a comfort to bask in.

‘Just a bit extraordinary’ is comprised of distinct parts that were previously presented individually in Limerick City Gallery and The LAB, Dublin. Three ‘chapters’ have now coalesced at the Highlanes, encompassing the artist’s exploration of “the expression of identity across the lifespan.” This ‘lifespan’ is predominantly represented through three photographic series: ‘not sorry’ documenting teenager’s unoccupied bedrooms (youth); ‘master of my universe’ featuring vendors on the Venice Beach boardwalk in California (middle age); and ‘trying to behave’, photographs of dancers at a bimonthly tea dance event in Covent Garden (old age). Along with the large-scale photographic portraiture, the exhibition features preexisting objects, text works, an audio piece and a small projected video.

The artist’s methodology was informed by the ‘Twenty Statements Test’ (TST), a self-concept survey created by sociologist Manfred Kuhn, which invites individuals to describe themselves in relation to the prompt: “I am…”. One room within the gallery is dedicated to the presentation of 75 anonymous responses gathered by the artist, displayed as wall texts on individual panels. The exhibition takes its title from one of these responses. Acquiring these self-analysis statements can be viewed as the artist’s primary achievement, as they arguably reveal far more than the posed and edited photographic portraits, in their honesty and raw representation. These survey responses succeed in showing a world made up of inadequacies and fears; they assure the viewer that they are not alone in experiencing these subjective emotions. However, in terms of depth, two images in particular stand out: a territorial boardwalk couple, seemingly only displaying themselves, sitting surrounded by strongly worded signs (warning against unpermitted photography of them or their space); and a large, proud image of coiffed and lipsticked ‘Lindsay’ who is taking a break from dancing. A small, ethereal video, depicting a dancing couple, is projected onto the altar (the venue is a former Franciscan Church), providing a lovely spot-lit moment amid the masses. Elsewhere, an audio work features a seaside ‘freak show’ carnival announcer. Nanigian has a background in business and, more pertinently here, psychology. She is therefore well-positioned to examine the value in this kind of artmaking, which incorporates qualitative research methods and the display of her subject’s objects and built environments. During a public conversation with Gemma Tipton on 22 September, Nanigian spoke of “elevating” and “paying respect” to the objects she acquired from vendors on Venice Beach that are now on display in the gallery. Objects – such as CD’s, necklaces, decorative chimes, supposed fossils of the earliest sea creatures and vinyl records (painted with images of Marilyn Monroe and David Bowie) – are presented in individual glass-fronted boxes. In an ‘inventory’ list to the side, the maker of each object provides some contextual, and sometimes amusing or profound, information about their lives or the Venice Beach environment, without associating names to the numbered objects.

One assumes that this “elevation” mentioned by Nanigian is achieved through taking these objects from their beachfront market origin and recontextualising them in the gallery. It is important to note that the only ‘objects’ that can be sold along this particular Venice Beach strip are artworks. The inclusion of these uncredited art objects – which had to be thus, due to their maker’s presumed participation in the anonymous survey – prompts a series of questions: How do we value objects and who ascribes this value? Is placement in the gallery or museum the ultimate signifier of import? If so, who says? Perhaps more importantly, how do we value an object’s creator? Which artists are exalted, by whom and why? Who is an artist anyway? These are compelling questions for an exhibiting artist to raise in a show which, alongside its more general exploration of identity, also managed to question a key identity in this context – that of ‘artist’.

Lily Cahill is co-editor of Critical Bastards Magazine based in Dublin.