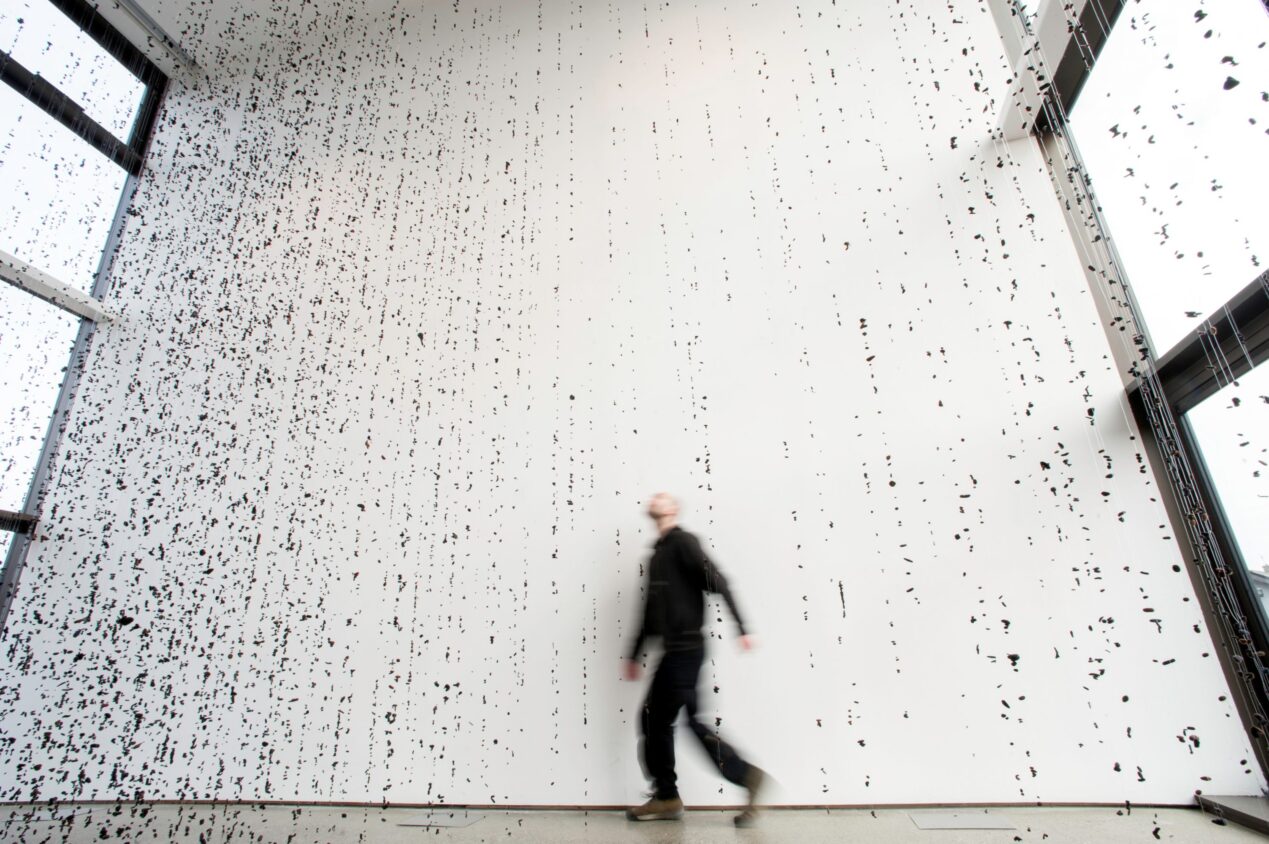 David Quinn’s show at Uillinn consists of two artworks, Uillinn Series One to Nineteen (2018) and Zero (2018). The former consists of 19 small abstract works on paper and wood, composed of gesso, oil-based pencil and oil bar. All are uniform in size and are hung at eyelevel on two opposing walls of the James O’Driscoll Gallery. Their location is not best served by the open plan setting, as sound from the reception area spills into the gallery. This highlights a common dilemma within contemporary publicly-funded art galleries: demands for public accessibility, interactivity and inclusiveness can often lead to the art itself seeming like an afterthought.

Quinn makes work that is in dialogue with the history of modernist painting. The end of painting was announced with the birth of photography and the era of mass-produced images and commodities. Quinn’s work engages with this dialogue at the ‘end of the end of art’. It is preoccupied with the self-evident fact of its own materiality. Certain repeated elements and gestures unify the series – signs of brush strokes, the grid (a recurring painterly parameter) and mark-making (resembling stitching) that is scoured into the surface. Several works appear to have a top layer of gesso that has then been etched with various patterns. From a distance, colours have a rusty quality, but close up, pinks, oranges and yellows emerge. Slightly larger and in a horizontal format, Zero is a monochromatic acrylic painting on plywood, with small circles indented into the surface. It has a translucent quality and is suggestive of snowscapes. The painting alludes to various art historical monochromes, from Kazimir Malevich’s Suprematist Composition: White on White (1918), to Ad Reinhardt’s ‘black’ or ‘ultimate’ paintings of the 1960s, of which he claimed: “I’m merely making the last paintings which anyone can make.”1 The inclusion of depth in the dimensions listed in the gallery handout expresses ambiguity around the object’s classification – is it a painting or a sculpture?

The self-reflexive aspect of Quinn’s work is shared by Joanna Kidney’s installation, Metamurmuration, an element that is explicitly signalled by the title. It is a murmuration meditating on a murmuration. A murmuration is a swarm – most often the amazing natural spectacles associated with starlings – a flocking, if you like, revealing the pun that flocking also denotes a kind of wallpaper, originally designed to simulate velvet cutouts on tapestries and wall hangings. Kidney’s threaded felt pieces trail the wall from ceiling to floor just outside the James O’ Driscoll Gallery, where they have to compete with an information stand, light switches and fire safety signage. As I moved from the corridor into the open space of Gallery II, Metamurmuration produced a momentary feeling of wonder. Seen from a distance against the back wall of the gallery, the installation appeared like a very large and beautiful abstract painting. The installation announces time spent making; many hands were involved in the assemblage of over 100,000 felt pieces. I initially perceived the felt as black, given associations with black swarms of birds, but in the light-filled upper gallery I saw that the materials were various shades of ochre, green, grey, lilac and red. Up close, the pieces move. This is not apparent from a distance, so perhaps my breath, my presence, caused the slight movement.

Like Quinn’s objects of vacillating status – paintings that must withstand disappearing into design – Kidney’s installation also has to fight for its status within the gallery, though it does benefit from being situated in a slightly quieter space, where it is easier to spend time with the work. Both artists are concerned with scale, evident in their attempts to create site-specific installations from the arrangement of smaller parts. In some instances, the work is overwhelmed by the quotidian goings-on of the gallery, however at other times, it manages to stand its ground as art.

Catherine Harty is a member of the Cork Artists Collective and a director of The Guesthouse Project.