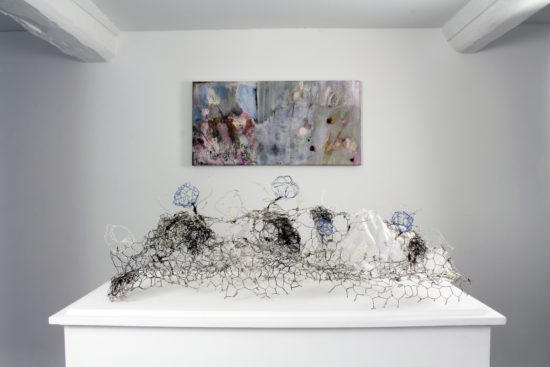 Unsteadiness is a deliberate quality of Sarah Long’s work, recently exhibited at Studio 12, Backwater Artists Group in Cork. For this exhibition, titled ‘Kingdom’, Long presented five mixed-media works on canvas and one wire-based sculpture. Behind blotches of paint, the canvases lie host to trembling pencil lines, indexing a shakiness of either the hand or ground. Tremors would exit through the utensil either way, traveling between floor and body and, in Long’s show, right to the tip of the art objects themselves; as a viewer nears the glass case containing the wire sculpture, its thin ends quake with each approaching step.

The encased piece is titled I’ve been silent for so long. The silence the wire proclaims – fugitively, breaking nothing – is indicative of Long’s interest in interfaces between the Irish landscape and the English language, and the literary history that embeds the two. Long’s textual references range from Yeats and other Romantic poets, to contemporary writers like Derek Mahon, whose poem, A Disused Shed in Co. Wexford, supplies two artwork titles in the show. One of these artworks, The world waltzing in its bowl of cloud, uses Arcadian purples and pinks; the titular work, Kingdom, incorporates glitter, indulging the colorful fantasies of the literary and artistic imagination, while simultaneously scratching them out.

Natural hedgerows are Long’s primary subject. The wire sculpture materialises the prickliness of hedgerows, its knotty lines and barbs poking in and out to form a warped honeycomb barrier. Like language, borders are another imposition on landscape. I’ve been silent for so long is Long’s first foray into sculpture, which she labels a ‘3D wire drawing’ – a term insisting on her sculpture practice’s lineage in her painterly background. It suggests lines being coaxed off the surface to intrude on the observers’ space, out in the open. Open space in Long’s paintings is anything but empty, with white canvas overrun by bands of delicate lines. Sometimes the lines coalesce into weeds and flowers, like sketches in a naturalist’s notebook. More often they run freely, filling works like Kingdom in a way that Long has compared to the population density that distinguished Romantic Ireland from counterparts in Scotland, rural England and Wales. With over eight million people in Ireland before the famine, there was simply less vacant territory.

Working at West Cork Arts Centre last year, on the exhibition ‘Coming Home: Art and the Great Hunger’, Long has incorporated this history into her research, showing us how landscape is ceaselessly written over. Through unsentimental shapes and lines, she renders the callousness – the hardening over – that characterises a landscape withstanding before, during and after famine. Testifying to this endurance, I can recall – Long’s ‘lyric poem’, presented as a wall text and de facto epigraph to the show – speaks to centuries of change witnessed by the natural world. It reads like an account of a long war, in which the lost are given a chance to tell their story beside the living paintings.

In the third stanza, Long writes about “the last wolf of Ireland’s plangent cry at the hands of the old noll.” The last wild wolf in Ireland is thought to have been killed in 1786 along the Wexford-Carlow border – near, perhaps, the disused shed in Co. Wexford? The wolf had been killing sheep, so the hunter killed the wolf. Hunting reads like a motif in the show, with artworks like Kingdom incorporating the camouflage colours of a hunting blind. Art historians have often integrated British Geographer Jay Appleton’s theory of prospect-refuge1 into theories of landscape, which suggests that the environment is something we scan from the perspective of both predator and prey. To hunt smartly, predators must empathise with prey; as such, empathy is not a neutral construct. In the context of environmental precarity, Long’s work finds more reciprocity in relationships of entanglement than in relationships of empathy. Unsteady is this new hand. The ship is rocking, down to the tip of each single gluey branch of wire. One footstep and the wire quakes; one stroke and the wolf is gone.

Frani O’Toole is a writer currently based in Cork.