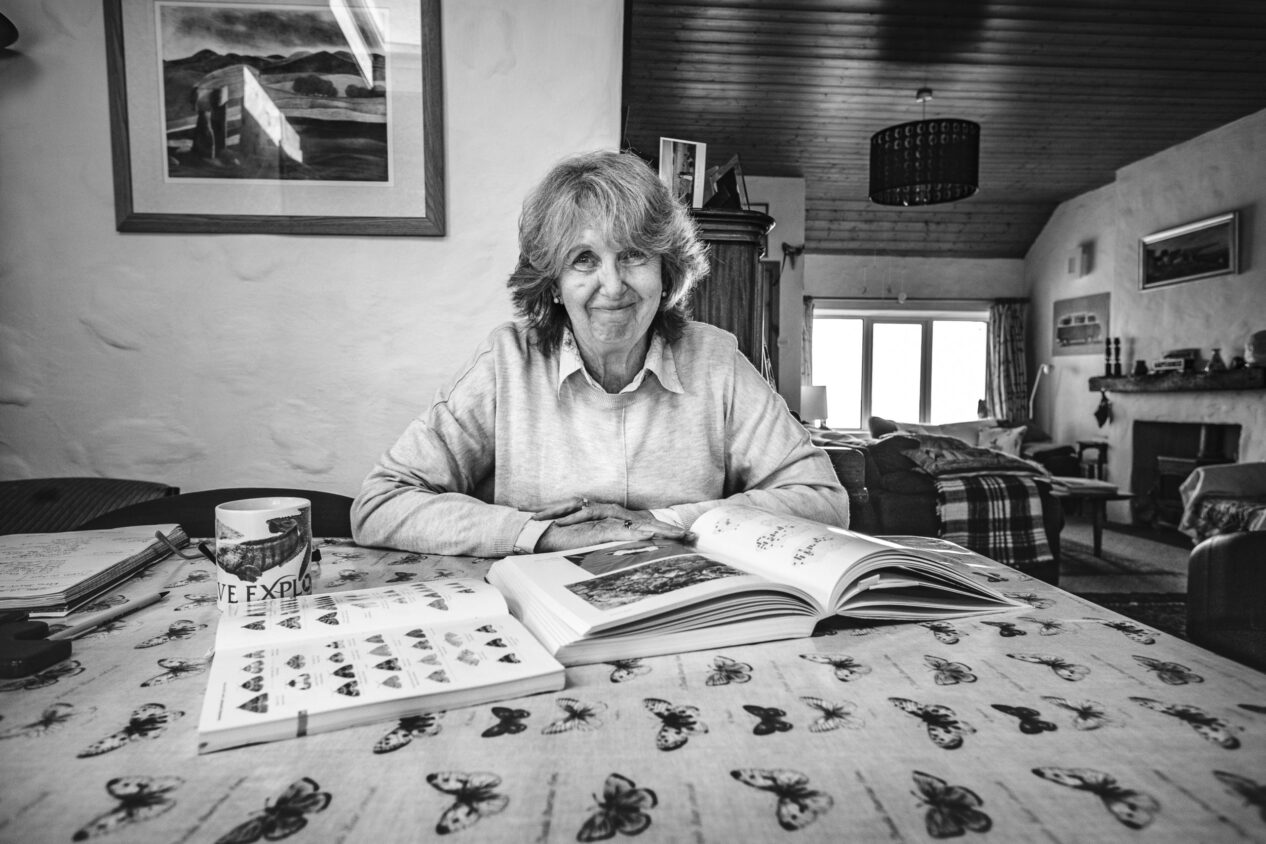 A series of black and white digital photographs by Belfast-based artist, Mariusz Smiejek, was presented in the Georgian Gallery in Ards Arts Centre. The small-scale photographs depicted women within the natural and domestic landscapes of the Ards Peninsula. Strong tonal contrasts played a part in some of these images, whereas others had a softer tonal range. The depth of field also varied; sometimes Smiejek concentrated solely on the subject, while at other times the background was also depicted in detail. The artist explained: “I focus on the person rather than their surroundings, capturing the person rather than things”. That said, the objects surrounding the women also seemed to have life resonance. Most of the photographs intimately narrated the women’s facial expressions but a few also conveyed their physicality, stance and their attitudes towards the camera, with some seeming more self-conscious than others. Yet my favourite photographs captured a sense of energy, such as wind tugging at women’s hair. Somehow, this elemental force brought a youthfulness and honesty to the women’s smiles. Smiejek stated that “it takes time to become part of the person’s life… I like to spend as many hours or days as possible”, suggesting that, ideally, projects need to be quite durational.

Also presented within the gallery was a series of small digital colour photographs taken by these women, as part of the ‘Back to the Future’ programme organised by the Institute for Conflict Research, Belfast. Jane McComb, an artist and resident of Ards Peninsula, worked with the group over two days. Initially, the group explored the writings of Irish poet, Louis MacNeice (1907 – 1963). MacNeice was born in Belfast, educated at Merton College, Oxford, and taught for a time at Bedford College, London – the UK’s first higher education college for women. He is buried alongside his mother in Christ Church, Carrowdore, on the Ards Peninsula. The women used McComb’s camera to capture a range of scenes including sea-washed rocks, a soaring black-headed gull, quiet country lanes, a derelict school in Portaferry, smiling people, and a number of graveyards with awkwardly titling headstones. Snippets of MacNeice’s poetry were placed next to these colourful photographs.

A physical distinction was made between Smiejek’s work and the women’s own visual exploration of their landscape. For instance, Nuala McKnight was depicted by Smiejek in front of her elaborate doll’s house. However, the photograph she took (of a knitted teddy bear, sitting on a stonewall in Portaferry) seemed rather disconnected, in terms of placement within the gallery, as did her selected quote: “I cannot deny my past to which myself is wed, the woven figure cannot undo its thread”. Similarly, Mary Mageean was depicted in Smiejek’s documentation hugging her grandchild, yet her own photograph documents Strangford Lough, thematically supported by her chosen MacNeice quote: “Round the corner was always the sea. Our childhood”. The two bodies of work – Smiejek’s portraits and the women’s own photographs – were further distinguished through the creation of two separate catalogues and the use of different titles: ‘Women of the Peninsula’ and ‘A Sense of Place’ respectively. In my view, the two bodies of photography enhanced each other, as the viewer gradually gleaned a sense of the women. Nevertheless, it required time to connect the disparate elements of portraiture, text and photographic self-reflection.

Mairead McCormack’s concurrent exhibition, ‘Fragmented Realities’, was showing in the Sunburst Gallery. McCormack is a textile artist who juxtaposes artefacts from the past within a collage format. In the gallery, eight small-scale works were pinned to two facing walls, comprising four paper collage works and four textile pieces incorporating print and embroidery on linen. The textile works were meticulously hand embroidered but had raw, fraying edges, creating a sense of incompleteness. The works had the quality of pages from a sketchbook – imperfect, but with suggestions of interconnectedness lurking beneath their flimsy façades. McCormack stated that, as an artist, she aims to revive and sustain the labour-intensive processes of the textile tradition. With ‘Fragmented Realities’, she attempted to explore the effects of modern society on shifting notions of craft and the handmade.

Kathryn Nelson is an artist based in County Tyrone.