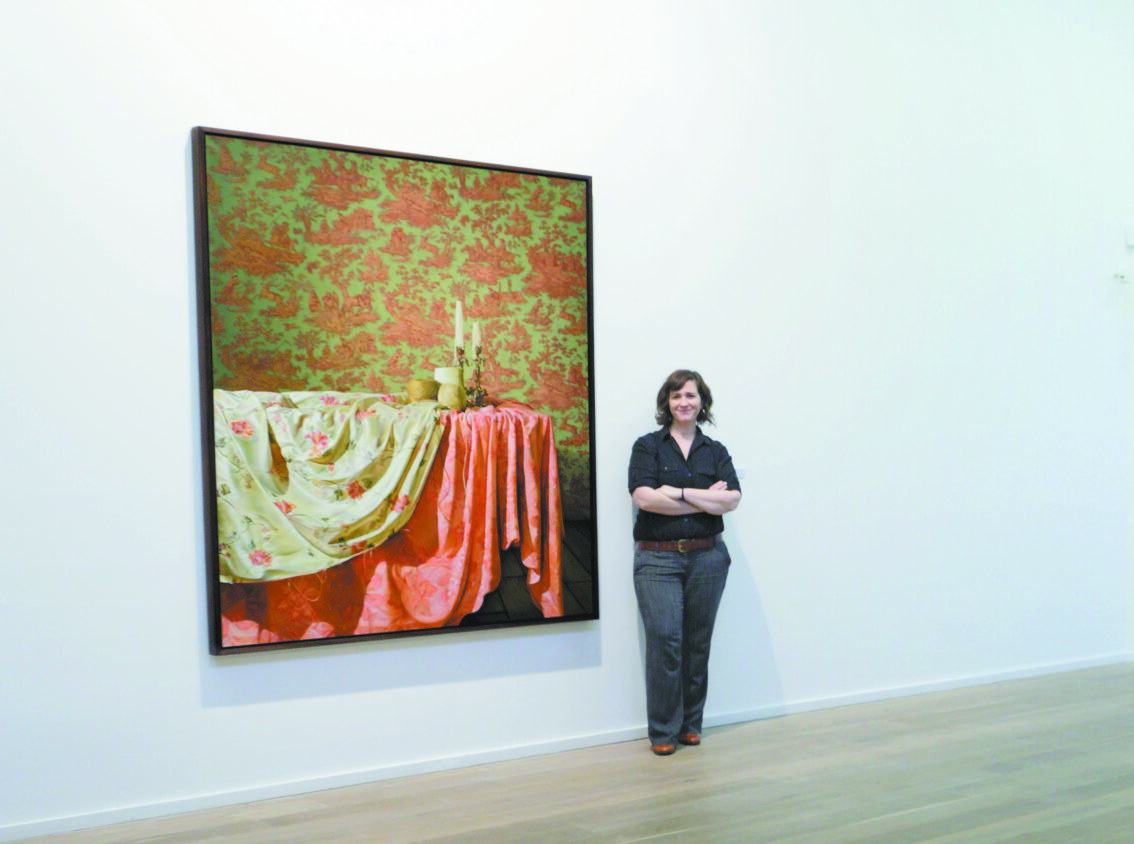 JENNIFER TROUTON DISCUSSES THE PROCESS BEHIND HER WORK ‘THE TIES THAT BIND’, WHICH WAS SHOWN AT THE ROYAL ULSTER ACADEMY’S 134TH ANNUAL EXHIBITION (16 OCTOBER 2015 – 3 JANUARY 2016).

My painting The Ties That Bind has its roots in the 1700s and the patriarchal mindset of the founding president of the Royal Academy of Arts, Sir Joshua Reynolds. In a sweeping generalisation, Reynolds decreed: “Let men busy themselves with all that has to do with great art . . . let women occupy themselves with those kinds of art that they have always preferred, the painting of flowers”. This statement, and the attitude toward still-life painting that it evokes, put fire in my blood in 1999 and has continued to be a source of motivation to this day. My initial reaction to Reynolds was to create a piece of work titled Looking at the Overlooked, which consisted of 304 still-life works on six-inch-square boards. It was my intention to create a large contemporary work of art that owed its very existence to a traditional genre and which, as a whole work, could not be easily overlooked. I had worked in multiples before, but never on such a scale. Neither had I used multiples as a rhetorical storytelling device. Looking at the Overlooked was exhibited in 2003 at the Ashford Gallery, Dublin and from that point I have experimented with the use of multiple images as a narrative device to explore wider issues. Even in 2003, however, I knew that I wanted to attempt a single large-scale work, but somehow always managed to cleverly talk myself out of it until The Ties That Bind.

In 2012, with the aid of an Arts Council of Northern Ireland grant, I was able to buy a number of Milliken Brothers six-foot oil primed linens. They were carried up eight flights of stairs and through the labyrinth of the old Queen Street Studios to my workspace. The delivery men left me 100 square feet of intimidating white linen to stare at and I continued to stare at that bare linen for a further 12 months.

During that time I was invited to take part in a three-person painting show in the Solstice Arts Centre, Navan. Solstice is an expansive gallery with acres of open wall space. It almost demanded that I face my fear and start work on the large linens. So after a few false starts I finally did, and along with a multiple piece of mixed media on wallpaper entitled What Remains, I began The Ties That Bind.

Having previously undertaken an ACNI-funded research trip to Massachusetts, I knew the themes I wished to explore: class conflict, the famine, industrialisation and the Irish diaspora. My American research focused on the story of my family’s emigration from rural County Armagh to the factories and railroads of Massachusetts. My discoveries triggered a series of potential intersections for enquiry, such as urban/rural, wealth/poverty, factorymade/handmade, home/abroad and authenticity/illusion.

I also knew that wallpaper would become the unifying motif of the works, both large and small. The Ties That Bind would be a political painting that used the traditions and techniques that have been historically associated with still life paintings, the techniques and tropes that Reynolds himself would have understood as women’s art, and women’s subject matter.

What I didn’t know was how and where to start painting on such a large scale. The physical reality of negotiating the linen was truly daunting. With procrastination as my mistress, I spent three months ruminating, designing and refining the composition. Each element was carefully considered before I made a single mark. I remember clearly the day I began work on the linen, as it was my 42nd birthday. Realising I didn’t have brushes large enough to paint a ground colour, I rather nervously laid down my first layer of paint with a roller from B&Q. Once in place, I finally relaxed and set about slowly and patiently plotting out the composition, gradually realising as I went along that it was going to take a while. I was not wrong. The piece ultimately took a full year to complete. What I also could not foresee was how The Ties That Bind would help me through personal tragedy. After suffering a miscarriage in April 2013, I fully immersed myself for many months in the mechanism of painting, allowing the daily rituals and routines of the studio to provide temporary respite from the profound grief I was experiencing.

The dominant feature within The Ties That Bind is the wallpaper. Wallpaper is often the last tangible mark of a person’s presence left in an abandoned domestic space, and it can reveal so much about their history. In The Ties That Bind I have reproduced a toile wallpaper entitled Stag Hunting. The original wallpaper depicts the rich at play. For the rich the land is a lush playground to be enjoyed. The scene is one that reinforces aspirational and reassuring ideas of status and wellbeing. By subtly replacing a number of the original motifs with images of the peasant classes, toiling and perishing on the land, I have subverted the idealised vision of the landscape and created a new narrative. The original unthreatening images of aristocratic enjoyment are now mixed with Irish looms and with the dead, the dying and the starving. The American factory towers that lured so many from their faceless agrarian pasts represent an urban, industrial future: a geographical and cultural shift well known to my own ancestors, who emigrated in the 1800s.

The still-life table arrangement further extends the narrative. The imported embroidered silk contrasts with the pink fabric, which is a family heirloom. The silk represents the ‘new world’ and its infinite possibilities. Its decorative opulence is mass-produced and counters the handmade, functional fabrics of the domestic spaces left behind in Ireland. Spaces like the crumbling two-room home of my great-great-grandmother, which are fading into the Irish landscape. The twine and the candlesticks, which belonged to my great-grandmother, serve as a reminder of the cottage industries lost to the industrialisation of the late eighteenth and early nineteenth centuries.

The Ties That Bind is a response to Reynolds, to his eighteenth-century misogyny, and to a patrician attitude that excluded women from being ‘serious artists’. However, these long-dead men, with their work that hangs row upon testosterone-fuelled row in the galleries of Europe, ultimately failed. Women stepped out from their petticoats and created art that spoke about the world, and about politics, hunger, rage and desire. They showed that they were much more than reproducers of flowers and fruit and, although, still, relatively few works hang alongside those created by men, women have broken out of the box that the establishment would have had them occupy. But even now, within contemporary art, where ideas can be elevated above execution, figurative painting has been kept in the background. Consequently, The Ties That Bind is also a response to the contemporary world, to those who think that aesthetically pleasing art is no more than a decorative craft. It is possible to look at The Ties That Bind and see just that: classical composition and academic lines, still life in its traditional sense, conservative, safe and unthreatening. But wait a while longer, take time to explore the possibilities and you will see that still life, like the women who were shackled to it, continues to be much more. It is a vibrant seanachaí – centuries old but still telling stories that we want and need to hear.