Dorje de Burgh: How do we talk about photography – or art – in a time of unprecedented global crisis?

Samuel Laurence Cunnane: At a time like this, to make work is one of appropriate response, especially as we’re encouraging social isolation; but to talk of previous work seems odd, like seeing TV clips of people hugging and shaking hands – it’s unnerving. I suppose this is the response to a crisis – we go into a heightened state of awareness of the here and now. What do you think of this now widespread turn to the internet and online space, where we can continue our affairs, safe from COVID-19?

DdB: Well it’s a paradox. On one level, it’s an incredible opportunity for humanity, to have these technologies at our fingertips in the midst of a universal crisis. It provides so many basic needs – community support, dissemination of information, etc. – while also allowing the potential for collective reappraisal and the sharing of ideas as we (hopefully) move towards a healing phase and a reimagining of the social/global landscape. On the flipside, however, our already pretty Baudrillardian world has suddenly gone full-virtual. It’s just very uncertain where it will all lead. To bring it back to the work, you are a self-confessed analogue fetishist, whose process pretty much ignores the digital. Do you feel that you would still be drawn to make art, if virtual space was the only avenue open to share the work? And if so, do you think you would change your working methods?

SLC: I am, as you accurately point out, a total fetishist when it comes to the celluloid and chemical parts of the history of photography. But beyond the pure aesthetic question, is the process itself that I love so much. The act of disappearing into a completely darkened room, without screens or outside information, is a kind of sanctuary. The physical nature of cameras – the loud shutter, the clicks of the aperture rings, the tactile nature of the prints – all of these things are reminders of a physical existence. Would I still make work this way if a virtual gallery was the only platform? Most definitely. My biggest concern with the online space is that I feel my work adds to the deluge of imagery assaulting everyone on the internet. Do you ever worry that the aesthetic inherent in the analogue process distracts from deeper considerations of the work?

DdB: On one level, it’s all just picture making, though I do just prefer the actual look of hand-printed pictures made on film. But then, there is also a definite difference, and that’s in the realm of the latent image. A digital sensor and a frame of film function in pretty much the same way, in terms of how they record light. But the digital image is compressed into binary and sped away onto a memory card to make room for the next one; whereas film itself moves and is wound along, so the latent image – the chemical fingerprint – remains an object in the world. Even before processing, the trace is there. I feel this has some kind of ontological value. There’s obviously ontological value in the compression and velocity too, it’s just a different thing, but the result is different in its resonance. If the process is part of the work’s conceptual logic, then fine; but it’s problematic when used as a false barometer of authenticity or value. Do you feel your ways of working sometimes become disproportionately emphasised, ahead of the actual content of the work?

SLC: I agree with you. The medium and way of working have to make sense, in terms of the conceptual logic and process. Eventually, these second-hand cameras are going to break down and the skillset and knowledge to repair them will disappear. At what point does the amount of effort required to keep a practice alive – mixing raw chemicals, making homemade paper and emulsions and building your own camera – begin to take up a disproportionate amount of time, compared to actually taking photographs? If analogue process gets disproportionately emphasised, then I am complicit, because of the care I take in printing the work. I’ve become less interested in what’s actually going on in the frame and increasingly interested in what it feels like to look at a photograph – and how this looking changes the scene itself. 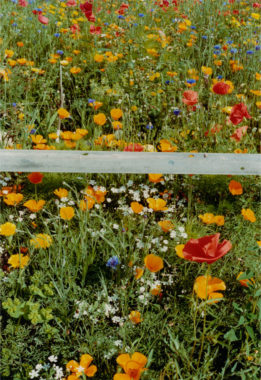 DdB: Do you feel the meditative environment of West Kerry has contributed to this turn inwards, towards the bare bones of image making? How do you feel about the ‘story’ in photography?

SLC: I’ve definitely resisted the idea of an immediate or linear narrative. I would prefer that the work be interpreted like a series of recollections or memories that time has murked and blended together. Having said that, some concise works with definite linearity are among my favourites, like Watabe Yukicki’s A Criminal Investigation, for instance. In terms of how my work has changed since moving to Kerry, I expanded on something I was already interested in back then, which was the gulf between the ‘real’, our experience of it, and the role of seeing in this. In other words, how the eyes, and by extension the camera, felt like tools we controlled but whose results we couldn’t understand. They are analogous because of the barrier they create between experience and witnessing it. I like it when I manage to make work that feels like it’s been made by a floating eye. Having said that, there are personal elements in my work – I photograph my mother a lot, for instance. But even then, I want the camera to play a part that affects the scene, through the framing and composition, the being present and altering it in a physical sense. When I’m witnessing a scene, there are numerous others I am not photographing at that point, so they become present in the work, as a kind of blind spot.

DdB: We’re all going to have to start thinking local in this new future. How do you now feel about the potential avenues for sharing work – analogue or otherwise – when the reintroduction of familiar communal cultural experiences appears so much further away than we previously thought possible?

SLC: If we’re lucky – and with some tight controls – people will visit some shows in person in the next few months. But beyond that, I can’t help feeling we’re accelerating an already ongoing trend. This will first be experimented by the art market, if the viewings of works and transactions can still occur at a similar rate, then it will move online, where the running costs will be a fraction of what they were before. As for public institutions and educational possibilities, what better way to bring art to people who are normally deprived of it (for geographic or socioeconomic reasons) than by putting public collections online? The opportunity for artists to use spaces on the street to show work in a safe outdoor environment could be another interesting development. Not to mention using temporarily empty premises of closed businesses, to showcase artworks in the interim. These might encourage a return to a localised practice. 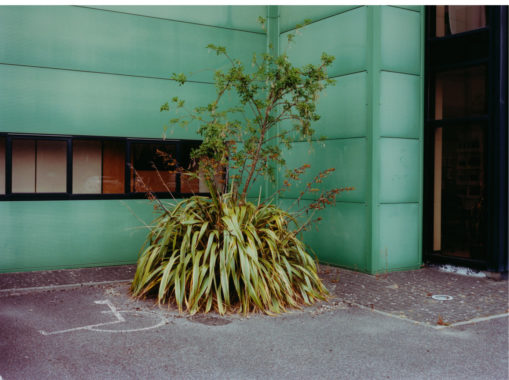 DdB: One potential plus that could come from this nightmare is the resurgence of a local / DIY scene, with art, music and culture created only for the immediate audience, maybe even without the a priori dream of global fame. But if that does happen, it will be paralleled with an ever-expanding online ecosystem. How do you feel this strange moment of collective grief, pain and uncertainty will affect readings of your existing work, created before the pandemic?

SLC: Part of my reasoning in making this work was that I wanted to turn my attention to the landscape I grew up in, and make it my own. I’m using the backdrop of a certain vernacular architecture, pebble dash, rain, damp undergrowth and the almost sinister vegetation we have in Kerry, to hint at what it feels like to look at it, exist in it, and outside it. In some ways, the work was about how being disconnected from the environment and the landscape is not a new phenomenon, but a result of our inability to perceive it. The environment has an agency of its own and I think this is vaguely threatening. I often think about it as the outskirts or periphery – of towns or landscapes, even our vision or consciousness. On a personal level, maybe the pandemic shows just how vulnerable we are to this ‘undergrowth’ and everything that dwells there. I don’t think this is because we’ve somehow lost a lifestyle more in-tune with the land; I think our consciousness has always been outside of it, cast out from nature as it continues oblivious to us. I think it’s quite humbling and maybe a bit lonely, to be on the outskirts looking in.

DdB: That’s an interesting idea – the human as outcast from nature. In our historical moment, when everyone has a camera and is visually literate, you are operating on a deeply engaged register with photography. Do you feel that the act of shifting your focus to that which might commonly be ignored – to scenes in which nothing tangible is really happening – is an act of resistance to our saturated media-sphere of the ‘event’?

SLC: I’m not sure I would say that what I’m doing amounts to any real act of resistance, in terms of our current situation. If I am resisting anything, it’s the part of my brain that wants to fleetingly and nervously dissect the perceived real into convenient disjointed impressions and move on. Photography can be a way of holding on to a moment, before it gets swept downstream.

Dorje de Burgh is an artist based in Dublin. His latest solo exhibition, ‘Dream the End’, ran at Mermaid Arts Centre from 5 December 2019 to 1 February 2020.

Samuel Laurence Cunnane is an artist based in Kerry. His solo exhibition at Kerlin Gallery was presented as an online viewing room, due to government restrictions on public venues during the coronavirus pandemic. This is an abridged version of a conversation, featured in the publication accompanying that exhibition.
kerlingallery.com