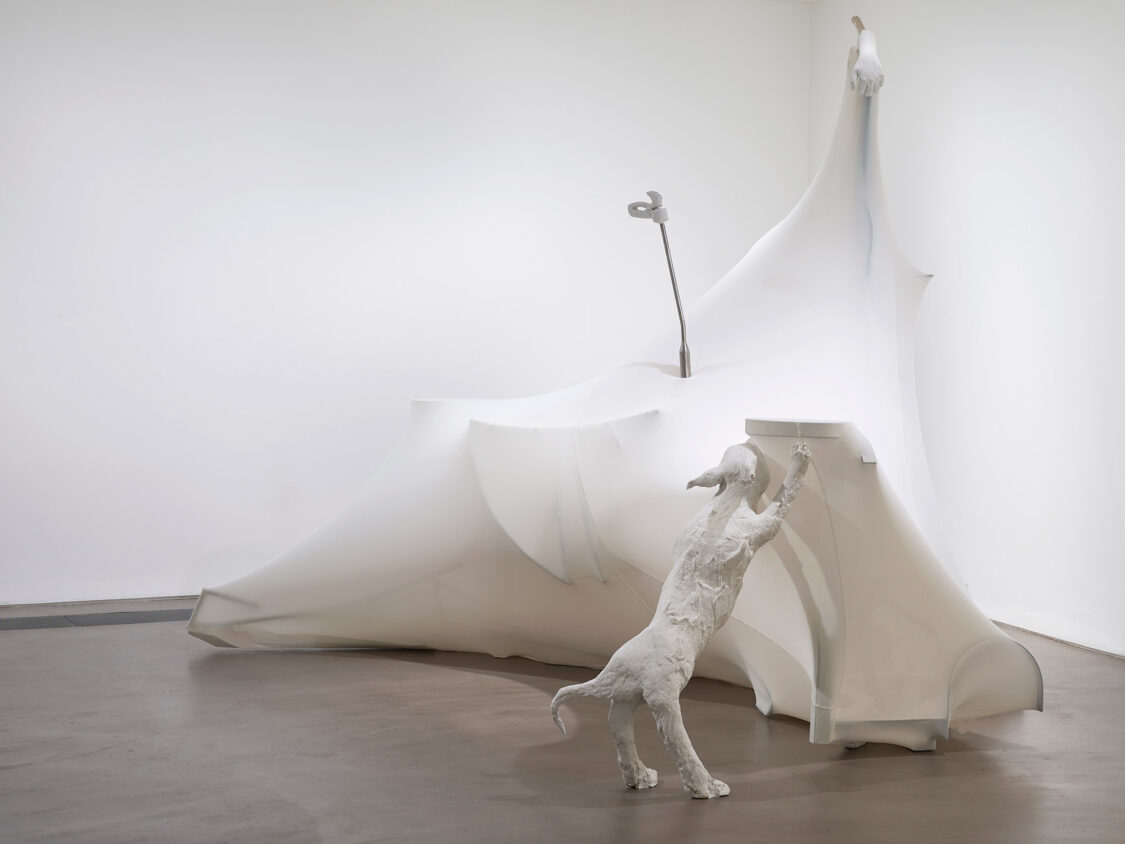 ‘C I T H R A’ is an exhibition of new work by Belfast-born and Glasgow-based artist, Lauren Gault. This is Gault’s first solo exhibition in London, showcasing installations that both revisits and further exploits the artist’s key approaches and concerns, which revolve around the use of unorthodox techniques and a wide variety of materials. The show emerges out of research undertaken by Gault during a residency at Gasworks in spring 2019. A key starting point came from a publication held in the British Library, a long forgotten science-fiction novel, The Men of Mars (1907), by Martha Craig, a relative of Gault’s. Craig was an explorer who developed a series of theories, including explanations for the origin of the universe, material travel and dual consciousness. From this book, loose conceptual overlaps feed into each other and inform subjects addressed in the exhibition.

The gallery text primarily frames this conceptual riffing around the artist’s upbringing in rural Ireland and the mythological figure of Mithras. An early rival to Christianity, this Roman religion   produced iconography which centred on bullslaying, with repeated images of dogs, snakes and ravens. What connects these disparate ideas is a shared vocabulary relating to the history of agriculture, which is present throughout the show, and within this, Gault finds stories about wildness and domestication. It seems almost as if the two exhibition spaces are divided between these polar opposites. The first space addresses ideas of wildness, through sculptures of wild animals and burning Roman arches; while the second describes the rise of the industrial, through depictions of extinct species and the usage of mass-production techniques.

In the first room, there are three distinct sculptures which share a pale palette of pure and off-whites, light greys and a rare poke of brown. Collectively, the sculptures act as a stage for particular protagonists: arched and snarling eyeless dogs with sharp teeth, stretching upon their hind legs against the taut nylon; a leisurely disembodied hand resting on a platform above; and hand-sized bulls sinking into the base of a long, narrow floor-based sculpture. In the second, mostly dark and empty space, three transparent water tanks are cut into the ceiling. Light shines through the liquid within each of the tanks, casting a gentle sparkle onto the wall behind. The emptiness in the space allows the light to bounce and glow, in contrast to the synthetic quality of the water tanks. One easy-to-miss hoof-print emerges from the wall, hauntingly depicting an auroch – an extinct species of wild cattle – serving as a reminder of what progress can leave behind.

Related but not exactly the same, there’s a logic between the   adjacent poetic resonances of history, biography and mythology   which seems to guide the construction of the works. It is less useful to think of these sculptures as singular objects; rather they seem to act as a sequence of materials, relationships and actions which hold a symbolic weight of their own. I think that’s why the charm of the works is found more so in particular sculptural flourishes, rather than the whole piece itself: in the taut nylon, stretched over solid wooden boards, which gives way to long sleek slender curves of fabric; in the off-white dust, set against the bright titanium surfaces of the sculptures and walls, which act as framing devices; and in a sagging ball of glass, frozen like a water droplet.

While there are many narratives and formal strategies to engage with in Gault’s work, it’s something beyond this which feels significant too. Her process is shaped by the rituals which she riffs upon, while history – that of agriculture, of Ireland and her own personal biography – becomes a raw material, creating rich points of departure for wider social and ecological concerns. More and more contemporary artists are revisiting unknown thinkers with alternative theories as subjects for their work, with such inquiries often focused on redeeming counter-histories and reflecting on other existential possibilities. Gault creates sculpturally-led works which hint at something almost occultic, the off-terrain spirituality of rituals centered on a tension between wildness and domestication, harnessing the otherworldly energy of nature and myths.