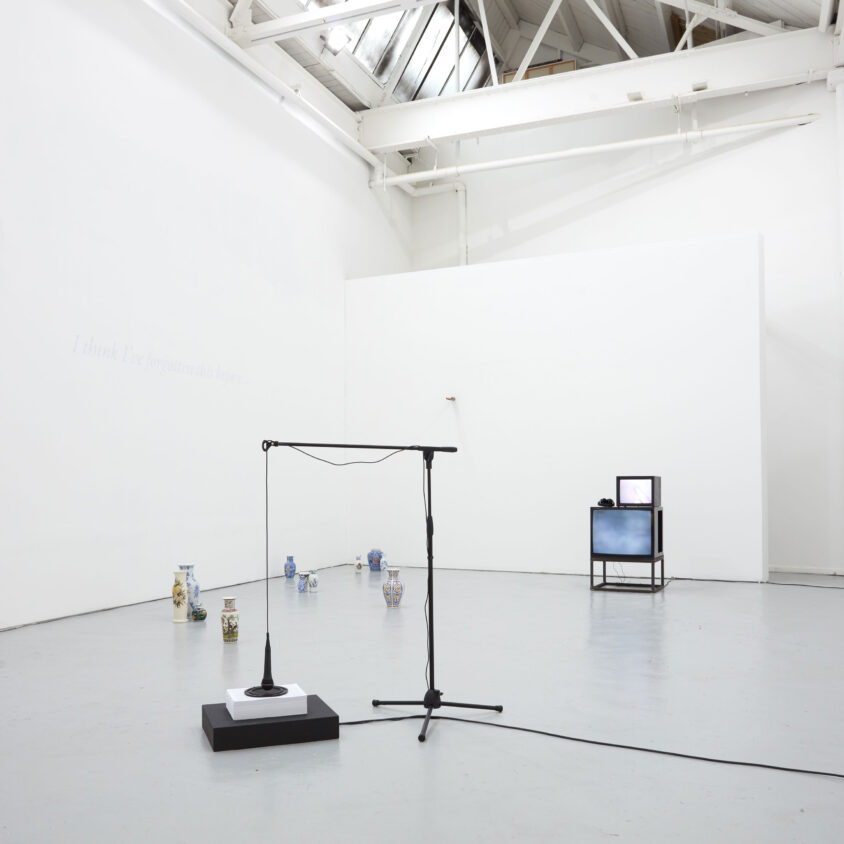 You don’t need me to recap the stories – the promise of the internet turned sour – but perhaps it was always heading that way? What began as a research project by the US military, in the heat of the Cold War, has metastasised into an elaborate, sophisticated surveillance network. The mainstream news is littered with reports of data mining, privacy violations, election hacking, and workers’ rights being deleted. Suddenly the internet is everywhere, inescapable and bad for us…

Over the last decade, the response from artists to a looming dystopia, shaped by tech giants and gurus, has typically taken a handful of predictable forms: fantastical scenes of techno-apocalypse, highly stylised portraits of alienation and dejection, and a more recent addition to the genre – ‘data dumps’, aimed at countering the prophets of Silicon Valley. Loosely connected to this current critical discourse, the exhibition ‘Scaffold’ thankfully offers something beyond the familiar tropes that have taken hold. The exhibition is curated by Seamus McCormack, featuring works by artists Kate Fahey, Adam Gibney and Jonathan Mayhew. The term ‘scaffold’ offers a useful architectural metaphor, as something that can control, contain and support the structures that govern our lives, particularly with reference to digital technologies. Through sound, video and sculptural installation, the artists riff on the symbolic value and consequences of information, its systems and its politics. Little here is made, but rather found and assembled, installed and juxtaposed – fabrication hardly makes sense, in an immaterial world of posting, scrolling and searching.

Jonathan Mayhew has contributed two separate works: one, a white vinyl text piece which reads “I think I’ve forgotten this before”, fading into the white of the gallery walls; the other, titled This is water, is a collection of decorative ceramic vases, dotted carefully around the floor, which hold USB sticks like flowers. Memory takes a tangible quality – it is hidden, stored, slipping from your mind. Instead of simply externalising our memory, like writing does, Mayhew’s vessels remind us how algorithms shape, prompt and mirror our own. Identity flows between user and avatar, with the pots and text acting as proxies.

Adam Gibney also addresses the urgency of information, appropriating scientific frameworks to examine how knowledge is constructed. In Affirmation 3: Understand(ing), a microphone is suspended over a text on String Theory – a theoretical framework for questions of cosmology and fundamental physics. We can hear a computer-generated voice repeating the phrase “I understand” from a speaker cone embedded in the printed text. The text is blurred at the edges, as if being gradually eroded by the swaying pendulum or some deeper entropic force. The computer-generated voice slowly consumes itself as it gets lost in a feedback loop from the broadcast of the speaker and the reception from the microphone. This tension between human knowledge and our systems of meaning is continued in Gibney’s second piece, Problem 5: A Space within this Place. In a narrow corridor towards the back of the gallery, a radio skips through different FM broadcast stations, searching for signals offering empirical descriptions of space. While both of Gibney’s pieces are explicitly about science or technology in some way, it’s through the process of installation that wider metaphors come to the fore, relating not just to what we know, but how.

Kate Fahey’s two-channel video installation, I could feel that my eyes were open, addresses how we process information. One chunky TV is perched upon another, with the top screen showing a finger pushing against the flesh of its own body. Below, zoomed-in footage of drone warfare drags across the screen, as if someone is moving the image with a mouse, inspecting the edges and details of this recording of distant violence. On the wall behind the two TVs is a small copper hand with rubber tips on two of the fingers. Through detached limbs and absent bodies, distance, alienation and presence are woven together, across media, places and experiences. Fahey reminds us that as information is so readily available, it is all too easy to become desensitised.

While it may seem that a consensus has calcified around a critique of the internet and the titanic corporations it has spawned, a growing awareness of the problems doesn’t seem to have created any kind of agency. The uniformity of much of the critique happening in contemporary art, merely serves to show how the internet has once again captured our attention. The artists in ‘Scaffold’ find something else – not an escape, retreat or even an attack – something approaching a heightened awareness, a scrambling for the tools to make sense of it all.