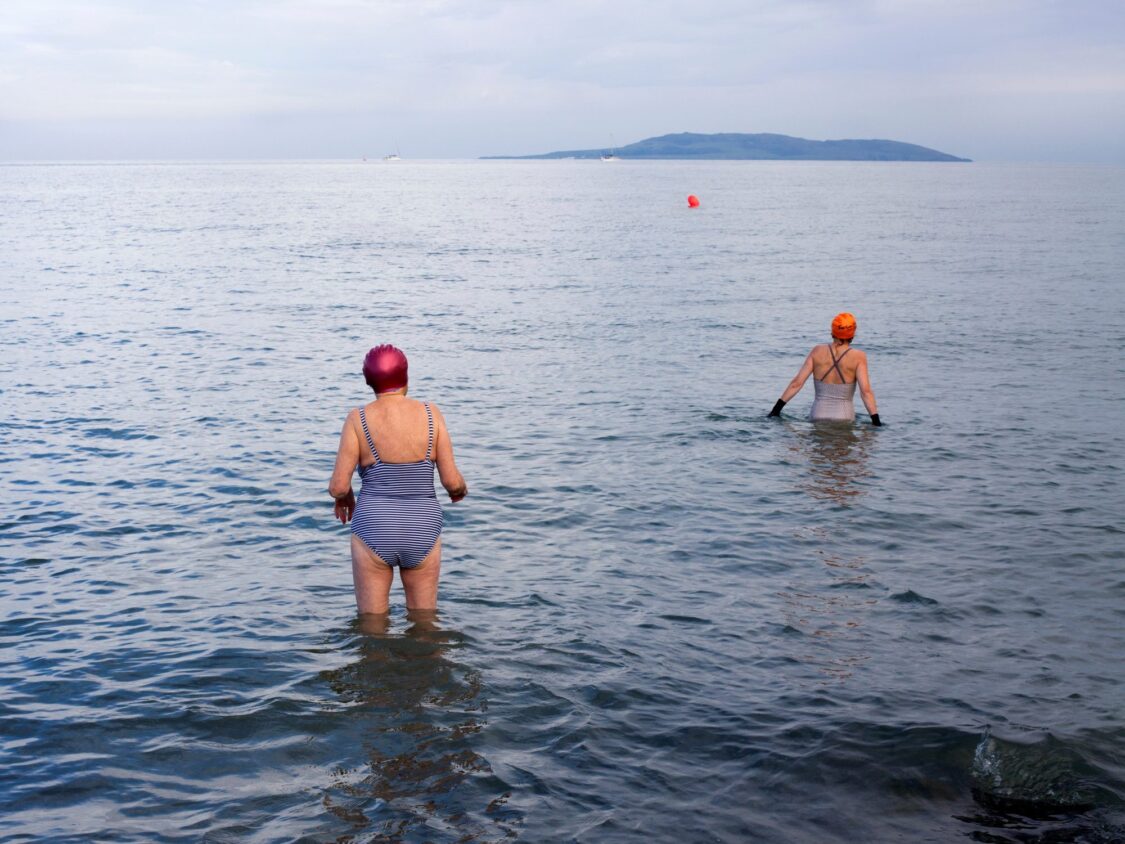 When is a photograph just a photograph? How can we ask questions of the photographic image that interrogate the specificity of the medium, without having the subject matter consume our attention? The flippant answer is that we can’t; or at least it is not possible without turning a blind eye to the material world disclosed through the photographic image. Even the vernacular modernism of the 1950s and ‘60s, which sought to create a culture of ‘photography for photography’s sake’, drew on the flow of everyday life to gesture towards photography’s intrinsic characteristics as a medium of visual communication.

These questions may seem too large to contemplate in relation to Gerry Blake’s exhibition of photographs depicting the everyday rituals of sea swimmers. However, such modest projects exploring the seemingly inconsequential routines of people’s everyday lives frequently bring such medium-specific questions into sharp relief. It is difficult not to speculate about the lives of the subjects who ritually swim in the ocean or conjecturing how their bodies provide clues to an individual’s identity, at the expense of questioning what such images may say about photography more broadly. This is not to say that Blake’s exhibition has deliberately posed questions about the specificity of the medium that may somehow have become overshadowed by his subject matter; rather it is sometimes through micro-photographies exploring everyday life that larger questions of the medium arise. This iteration of ‘Into the Sea’ consists of 22 photographs, taken at ten bathing spots along Dublin’s coastline over a 12-month period. Mostly a series of portraits taken from behind (showing bathers either entering or observing the sea), the photographs are punctuated with the architecture of bathing spots, including rusted metal railings, concrete steps and the cracked walls of changing rooms. In addition, an illustrated poster print documents these locations. Within the gallery, the photographs are loosely configured into groups. Framed photographs are accompanied by white-bordered prints, pinned directly to the wall. There is a visual clarity to the photographs and high production value to the prints. The differences in framing convey alternating approaches: the wooden frames prompt enclosure of the pictorial space, establishing sequential relations between photographs; while the white borders of prints bleed into the gallery wall, deliberately positioning the viewer in relation to the subject matter.

The exhibition opens with three photographs – 7.00 a.m. September #1 (2016), 7.00 a.m. September #2 (2016), and 8.00 a.m. September #2 (2016) – close-up, distant and elevated back-facing portraits of female swimmers looking towards or entering the sea. These photographs document distinct moments, but their configuration in relation to one another makes it difficult not to interpret them as the depiction of sequential actions. In another pairing of photographs – 11.00 a.m. May (2017), and 1.30 p.m. November #2 (2016) – two bathers, one female the other male, grip onto metal railings from the left and right-hand sides respectively, as they descend into the sea. The effect draws the viewers’ eye into the blank wall space between the two photographs. It is through such configurations of distinct moments that questions emerge around the specificity of the photographic image.

Distinctions of time and place are erased, as the photographic series establishes relationships between the subject, photographer and viewer. Notably, the artwork titles eschew the specificity of place and exact dates in favour of time and calendar month. Such contextual ambiguity allows the representation of discrete, ritualistic moments of individual swimmers to be brought into relationship with one another. However, this ambiguity is not without its problems; the anonymity of the subjects, combined with the rear-view portraits is troubling. The viewer’s identification with individuals is relegated in favour of accentuating a generic temporality. Blake’s exhibition touches on broader questions of photography, but in a way that only raises more questions about how the medium can allow the viewer to identify with the subjects, while making them appear as remote and anonymous figures within the pictorial frame.

Justin Careville is a lecturer in Historical and Theoretical Studies in Photography at IADT Dún Laoghaire, where he is also chair of the BA (Hons) Photography programme.