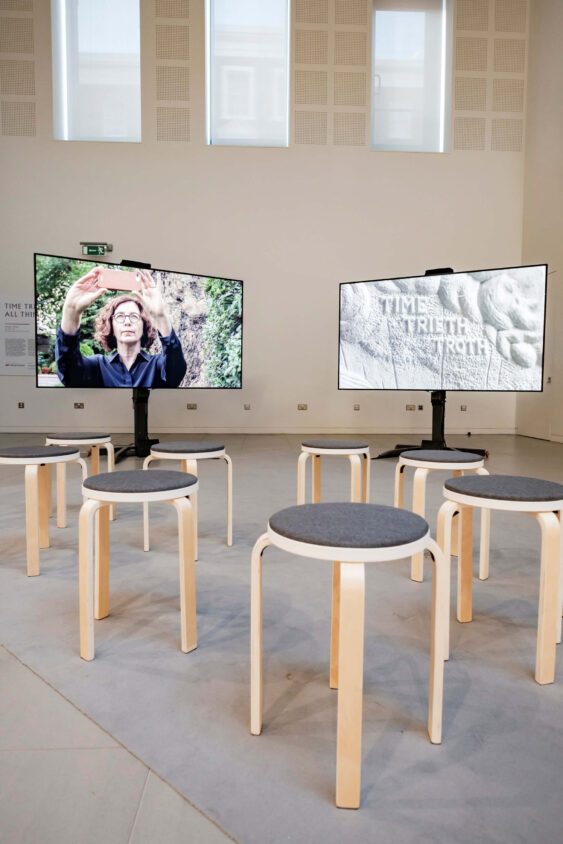 CHRIS HAYES TALKS TO GRACE WEIR ABOUT HER CURRENT EXHIBITION AT THE INSTITUTE OF PHYSICS, LONDON.

Fight with Cudgels (c.1820–23) is a painting by Francisco Goya that depicts two men duelling, and with each step, slowing sinking further into the mud below them. Their supposed opposition is a misreading; their struggle is not between two distinct forces, but a situation which they create together and for each other. “With every move they make,” wrote French philosopher Michel Serres, “they are gradually burying themselves together.” The image appealed to Serres as a metaphor for a relationship between two things, in this instance, that of people and the threat of climate catastrophe, which he discusses in his book, The Natural Contract (1995).

“So, it’s this point that I like very much,” Grace Weir says about Serres and Goya, “how he says that the differences are moot. As we’re dealing with ideas of our potential distinctions, this image throws the relationship between these things.” We’re discussing Weir’s solo exhibition at the vast new gallery in the Institute of Physics in London. Her filmic installation, Time Tries All Things, is characteristic of much of Weir’s work –reflecting on complex scientific and philosophical ideas about time, and emerging out of collaborations with notable figures, on this occasion, Professor David Berman of Queen Mary University of London and Professor Fay Dowker of Imperial College London. For Weir, Serres’s analysis of the Goya painting suggests not just a model of ethics – people and their environment entangled, dependent – but a useful understanding of knowledge. She states: “you can’t have a concept of history without a concept of time.” Any means of understanding the world has multiple starting points; just as the struggle of the two men brings them together, any disciplines, ways of working or communicating are inescapable from each other.

But don’t describe this as ‘art meeting science’. Weir tells me: “I should say, I hate ugly hybrids. I’m very, very critical of sci-art, or whatever they call it.” She goes on to explain that she is “a little bit tired of the art and science conversation”. It’s a cultural conversation she’s been actively involved in for over 20 years. After completing an MA in New Media in the late ‘90s, an interest in concepts of time naturally emerged out of her work in film. This relationship between time and moving image has been central to the work of countless artists, from Warhol and beyond. It seems that Weir’s important contribution here is to go much, much deeper.

“I’ve been following a particular train of thought for ages – and it was really about wanting to understand time better. In the late ‘90s, new media and film were thought of differently than we think of them now. I wanted to understand the nature of time because I was working in film. And that’s what led me to want to meet a physicist, to want to understand relativity. It took about 18 months of talking to the physicist before I understood it. And really, coming to understand that had a transformative impact – it changed me. I always say it’s not something you can recover from, and I don’t want to either.”

And this pivotal moment has reverberated through her practice ever since. One of the most significant manifestations was her retrospective at the Irish Museum of Modern Art, titled ‘3 Different Nights, recurring’ (7 November 2015 – 28 March 2016), which comprised some 30 works, including three major film commissions. This new commission at the Institute of Physics continues and elaborates upon many of her central concerns. Densely packed with elaborate scientific and philosophical ideas – such as space-time illusions and quantum mechanics – the video’s focus is resolutely personal and material, centring on a number of individuals who are drawing and carving from stone.

There’s a connection to the physicality of the drawing and stone carving depicted on-screen, and how Weir is directly involved with the camera work and the editing. “Editing is about time,” Weir explains. “How it’s cut up, how the film is paced. You’re controlling when shots are coming, when they’re not. Things don’t need to be sequential, they can loop back into each other. They don’t have to follow a beginning, middle and end. These are all choices.” Cleary, time, control, authorship and the fundamental basis for these scientific concepts is reflected by what happens, how it happens and how it’s shown – it’s as layered and elaborate as these ideas are complex.

Time Tries All Things comprises two films, presented as a dual-screen installation. As explained by Weir, one film is more linear, while the other one is cut up, with each film having “a completely different sense of time.” This dual format is reflective of the physicists she’s collaborated with and how differently they conceive of these ideas. The artist is telling this story through scripts, camera work, voiceover and a heavily involved installation process. And while Weir mentions how important it is to have a budget to collaborate – to bring in people with different skills and to finalise the piece in different ways – she’s clear about her role and responsibilities as the editor. During our conversation, it becomes apparent how important the process of making the work is. Just as she took control during the extensive editing process, Weir also worked for several days on the installation, taking a hands-on approach to everything necessary for this show to come together.

But for Weir, to place too much emphasis on the outcome is to miss the whole picture. “As I’ve become more familiar with the field of science, when I hear the word ‘science’ now, it’s a bit like I would hear the word ‘art’ – this could mean everything, from opera to concrete poetry. So, if someone’s going to talk about art, and they mean all of this and more, I’m a bit perplexed; what are you talking about? And specifically, what are you talking about? Even within the field of physics, there’s applied physics, theoretical physics. And they’re all very, very different. Different in their approaches and in their outcomes.”

“I find it very difficult. The more I’ve engaged scientists the more, actually, I find it difficult to make a statement on it because… I suppose, fundamentally, I don’t know what we can really obtain here. I’m sceptical of it, this pitting one generality against another. Having said that, of course I don’t think all things are equal and all things are the same. There are, of course, strong divergences in the field. I don’t go out to engage with scientists. That thought never comes to me. When I’m talking with David [Berman], it’s not like I’m there with my artist hat on and they’re there as scientists. We’re people, sitting in a space discussing something. It’s not about the outcome – there may even be no outcome. It’s the desire to be in that space with somebody, when you’re both engaged with the topic, that drives me to collaborate. I very much like that space – before things are art, or before things are science.”

Chris Hayes is an Irish writer based in London and the founder of The Emotional Art Magazine.

Grace Weir is an artist and filmmaker based in County Leitrim. ‘Time Tries All Things’ continues at Institute of Physics, London, until 29 March 2019.
graceweir.com