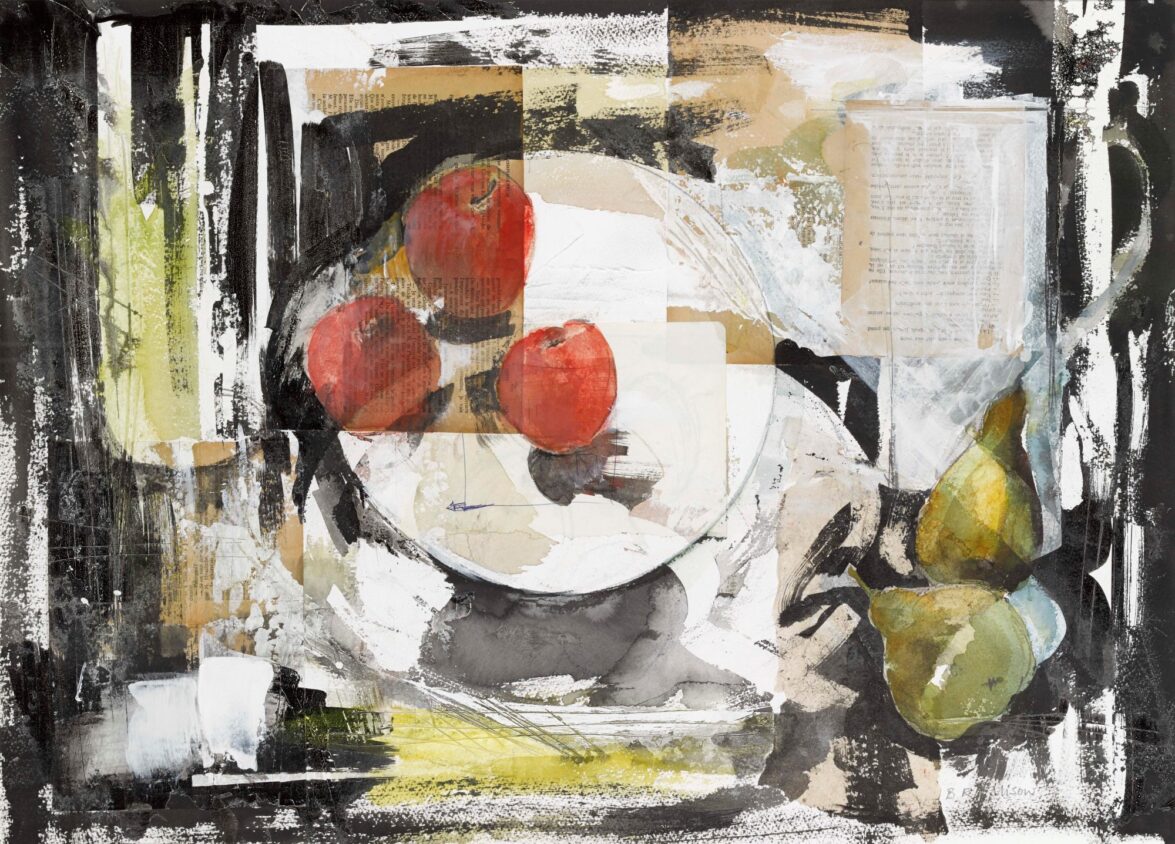 Husband and wife, Robert and Barbara Ellison, are showcasing their recent work in concurrent solo exhibitions across two gallery spaces at the Island Arts Centre in Lisburn. Without an overarching theme attributed, the exhibitions freely explore the artists’ varying techniques and painterly styles. This is a unique opportunity to see work by these two artists in the same venue at the same time, and to observe similarities and differences across their distinct practices. When opening the exhibition, artist Neil Shawcross noted that both artists are starting to gain international attention, with Robert’s work being shown in the Agora Gallery, New York, earlier in the year.

Barbara Ellison has vast artistic experience as a member of the Ulster Watercolour Society, the previous Head of Art at Stranmillis College, and as the former president of the Ulster Society of Women Artists (until 2006). She has also won many awards for her work. In Gallery 2 at the Island Arts Centre, Barbara presents watercolour paintings, drawings and several mixed-media works, the majority of which are fairly new. Despite the fact that this large collection of 24 works is presented within a relatively small space, the exhibition does not feel overcrowded, arranged as it is. The artist is clearly experimenting with technique, evident in the mixed-media pieces, which add further layers of texture and complexity to her light and skilled painterly technique. Her exhibition feels like a foray into new territory, especially in relation to her watercolours, with the primary material always being simply water in the past.

Still Life with Bowl and Peaches (2017) is a perfect example of the new direction in which the artist is leaning. This dynamic and exciting mixed-media piece depicts a deep blue bowl from above, with what appears to be three ripe peaches clustered in the corner. This peachy hue is echoed across the rest of the piece, with fragments of text-rich pages torn from a book. Combining with other textures and the lightness of the watercolour medium, this printed material adds a narrative layer to the work. The rest of the painting is dotted and scrawled with ink, darkening the overall effect and deepening its appeal – a tactile approach that ultimately offers a considered expression of what the artist is seeing and experiencing in her surroundings. With no curatorial theme, the exhibition presents a variety of subjects, from still life to landscape, depicting both calm and dramatic scenes. This variation leaves no doubt about the artist’s skill, when approaching any subject matter.

In Gallery 1, Robert Ellison’s extensive series of oil and acrylic canvasses are similarly diverse in subject matter, ranging from still life scenes to depictions of Donegal landscapes. The artist is relatively new to painting yet has already gained substantial exposure, with his work being exhibited and collected across Northern Ireland and the United States. The most fascinating aspect within every single painting, is Robert’s interpretation of colour. His 2017 series, ‘The Garden in February’, is beautiful in its wholesome and optimistic treatment of an otherwise dull and dreary time of year. The series has bright blue skies, as well as mustard yellow landscapes infused with vibrant pinks, which are far from a typical Irish winter scene. Ellison embraces bright hues with thick, expressive brushstrokes, conveying his obvious joy at depicting his own garden in such a dynamic colour palette. The Island Arts Centre has taken care to present the work of these two artists as separate and distinct solo exhibitions in different rooms. However, when viewed together, the work really makes sense. There are a number of obvious crossovers, not least the fact that the artists clearly travel together, are inspired by similar things and have the same varied interests across a range of subject matter. For example, both artists present painterly interpretations of Blanche’s Farm. While Barbara’s acrylic painting, Gall Bog, near Blanche’s Farm (2017), simply sings with expressive tones and rough, angular movements, Robert’s Stream Near Blanche’s Farm, brings forth a heightened and colour-rich interpretation of a bright landscape under a lavender sky.

These scenic alignments offer a lovely nod to the couple’s shared experiences, which are expressed from inherently different perspectives. It is unclear whether the two artists actually paint together, yet the similarities of subjects and locations unite their work in beautiful and thoughtful ways. Such duality makes these exhibitions a joy to explore first-hand and it therefore makes sense that the work of these artists be presented apart, yet be experienced in close proximity.

Mary Stevens is a curator and writer who currently lives in Belfast.