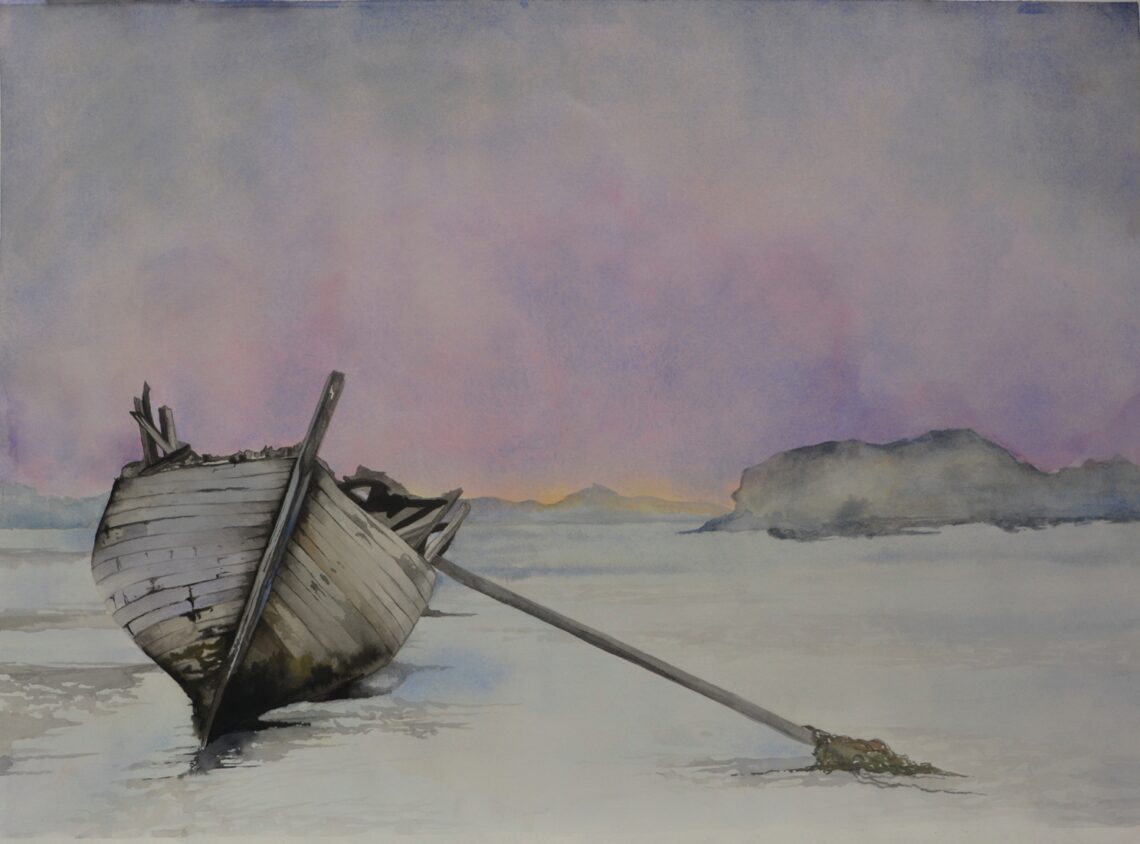 I rarely turn down an offer to travel to Birr, a heritage town with multiple architectural attractions. One of these is the Oxmantown Hall (a former parish hall built in 1888), now Birr Theatre and Arts Centre. Open in its current form since 2000, the renovated building is a jewel of Irish architectural history and a modern hub of arts activity for the town and surrounding region. The building faces a row of impressive terraced Georgian houses on a street that is shouldered by the ornate St Brendan’s Church. I travelled to Birr to see Brígh Strawbridge-O’Hagan’s show ‘At the Fade,’ which was installed in the front foyer of the building. I spent a few minutes knocking on the front door, before finding myself chatting with staff and drinking coffee while looking over the show. In many ways, this was the perfect preamble to thinking about the exhibited work, not least because I got time to reflect on my wonderful memories of Birr (having spent time there as a teenager), but also because memory – in some form or another – seems to be elicited intentionally in the brave simplicity of Strawbridge-O’Hagan’s work.

But what do I mean by ‘brave simplicity’? At a time when artists are compelled to situate their practice within evermore complex discursive frameworks, it is refreshing to approach an exhibition that is simple, even modest, in its execution, concerned as much with what isn’t there and what has been subtracted. ‘At the Fade’ is a series of paintings, paper cuttings and pencil and charcoal drawings, with all but two being best described as landscapes. However, it is the drawings that I found most intriguing, with brave simplicity lying in their largely unfinished form. The best example, Away at Sea, is a pencil portrait, drawn in such a way as to suggest somebody that the artist is striving to remember, but cannot fully visualise. Perhaps ‘the fade’ denotes a yearning to remember; a point in our cognition when memories are difficult to grasp; or when the past is no longer immediately accessible as ‘the past’. This process of grappling with memory is also addressed in Sea Rope, an exquisite drawing of a large rope knot, the strands of which fade into nothingness in the surrounding page. Each strand is indicative of a memory, with the knot signifying a striving to remember. Memory, in this sense, could mean an untangling of the knots that we call ‘life’.

The centerpiece work of ‘At the Fade’ is – on first viewing – the immense drawing, When Waves Were Horses. However, after leaving the centre, I found myself thinking about the only piece that blends figuration and abstraction. Circular and two-tiered in its formation, the top section of Dusk Split consists of an atmospheric charcoal drawing of a woodland viewed from a distance (over which there are swirling clouds). The bottom tier is a series of colorful penciled lines drawn perpendicular to the base of the upper tier. In some sense, I was drawn in by the simplicity of line and by what isn’t formed in these colours. It’s as if the artist offers us the tools to complete the picture for ourselves. I began imagining where the lines might lead, like lines of flight from the dark forest the soul, with each colour opening up an emotion in me.

Prior to leaving the space, I chatted with the staff about the challenges faced by multi-purpose arts centres across rural Ireland and soon afterwards, found myself pushing a trolley around the local Tesco. Before I knew it, I was at the counter buying the remastered version of George Michael’s 1990 album Listen Without Prejudice. I always wanted the album, but was too inhibited as a teenager to admit that I liked George Michael. Driving down the motorway with the songs bellowing, I thought about how I would write this review. Unbeknownst to myself, the seed of an idea had been planted. Several works presented in ‘At the Fade’ had touched me to such an extent that I did something affirmative and bought something I had always wanted. Maybe, I thought, something in these images had engendered a kind of opening in me? Revisiting this place to see the exhibition had triggered memories and unexpected thoughts. Sometimes we just need a nudge in the right direction. ‘At the Fade,’ in its entirety, offered a gentle and rewarding prod.

Dara Waldron lectures at the School of Art and Design, Limerick. He is the author of the forthcoming New Nonfiction Film: Art, Poetics and Documentary Theory (Bloomsbury, 2018). He also maintains the experimental arts blog ‘Art Encounters’ for HeadStuff.ie.