Denis Mortell’s exhibition, ‘Protectorate’, curated by Catherine Marshall at the South Tipperary Arts Centre, leads with the titular image: a statue of Oliver Cromwell. In crisp black and white, he is bracketed by out-of-focus, pinkish strips – railings or hoardings perhaps. This contrast is the first note of tension running through the presented works. A tree in the foreground of Protected View, Point Hill, Blackheath, 2019-01-29 bisects a cityscape. Backstop III and IV – two rural landscapes through which a road and a river meander – are interrupted by garish white and red road signs. Imperial I, depicting a flashy bunch of fake red roses lying on concrete (possibly a memorial?), is hung low, demanding that the viewer bend down – bow even – for a closer look.

GPS coordinates feature in the lower margins of most of the photographs, disrupting the notion that these images be taken at face value. The co-ordinates for Untitled, 2019-05-24, a sea and sky devoid of visual clues, invite the use of the ubiquitous smartphone. Once the location is revealed as being off the coast of West Africa, slave ships break the horizon of the mind’s eye. Lined up beneath – just as the Gulf of Guinea geographically aligns with London – are Protected View, Hampstead Heath 29-03-2019 and Protected View, Greenwich, 29-01-2019. These dates will be familiar to those who followed the torturous Brexit negotiations.

Untitled shows a Westminster needled with protective scaffolding. The backsides of street-level, anti-Brexit banners horizontally bisect the picture, partially blocking views of a statue; Richard Lionheart rides his horse along the divide. In front of the banners, a grey-haired woman looks off to the right. Above her, rippling, a red castle over a bloody sea, is the flag of Gibraltar. Below, the pointed tip of a man’s leather shoe breaks into the frame. Teeming thoughts of divides, wars, assassinations, crusaders and invaders, are left to the viewer to marshal. 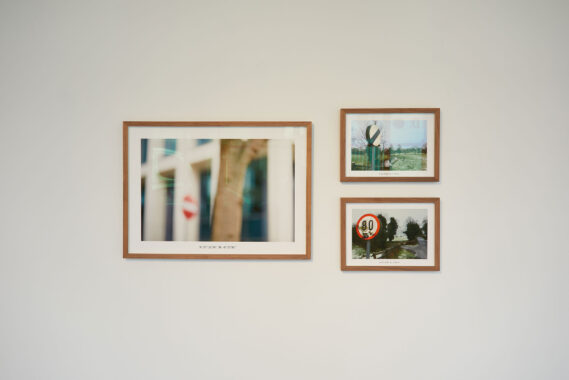 Backstop II depicts waste ground in Irish border territory. A forklift loaded with pallets (calling to mind Northern Ireland’s annual bonfires) sits against an old shipping container, sporting advertisements for fireworks (triggering associations with ammunitions and war) and ‘cornices and ceiling roses’ (décor of the ruling classes). A notice indicates the presence of CCTV, while the remains of traffic cones and other detritus is scattered about. Backstop I merely offers a close-up of a white line, a cat’s eye from ground level. A faint divide in the wet tarmac disappears into the soft, green ditch of a rural road.

Bookending Cromwell is Protected View, depicting a statue of King George II at Greenwich. George, whose reign saw Britain evolve as a global power, is wrapped up in plastic. Brexit may be nearing the end, but the show is not over. A change of key is signified by a move into an annex. A postcard-sized image of a teacup on a saucer with a silver spoon, China looks homely but the Olde England that Brexiteers hanker after was built on trade enabled by colonialism, a knock-on effect of which is the continuing mass movement of displaced people. A print of The Tower of Babel by Pieter Bruegel the Elder, accompanied by an assemblage of miniature pallets neatly stacked on a wooden plinth, offers more fractured imagery. Babel refers to an attempt on heaven that was thwarted when God rendered humans incomprehensible to each other. They, we, were then scattered to the four corners of the earth. Centred between these two small pieces, dwarfing them, is an exquisitely captured close-up of a pound coin, upon which is stamped a blue euro sign, which seems to dangle from, or pierce, the queen’s ear.

Aside from Mortell’s professional process and his sharp eye, ‘Protectorate’ shows how photography can contribute to the democratisation of the arts by hinting at multiple narratives and allowing for creative interpretations. Untitled, a large close-up of a spoon, closes the show. It could be read as a paean to the painterly possibilities of the photograph. It recalls Avigdor Arikha’s painting, Sam’s Spoon (1990) – a tribute to Beckett. The text in the lower margin “…go to the chippy…” disrupts the thought. This is a working-class spoon. And a key. Look into its distorted surface and see what you will see.

Clare Scott is an artist and writer based in the South East of Ireland.
clarescott.ie