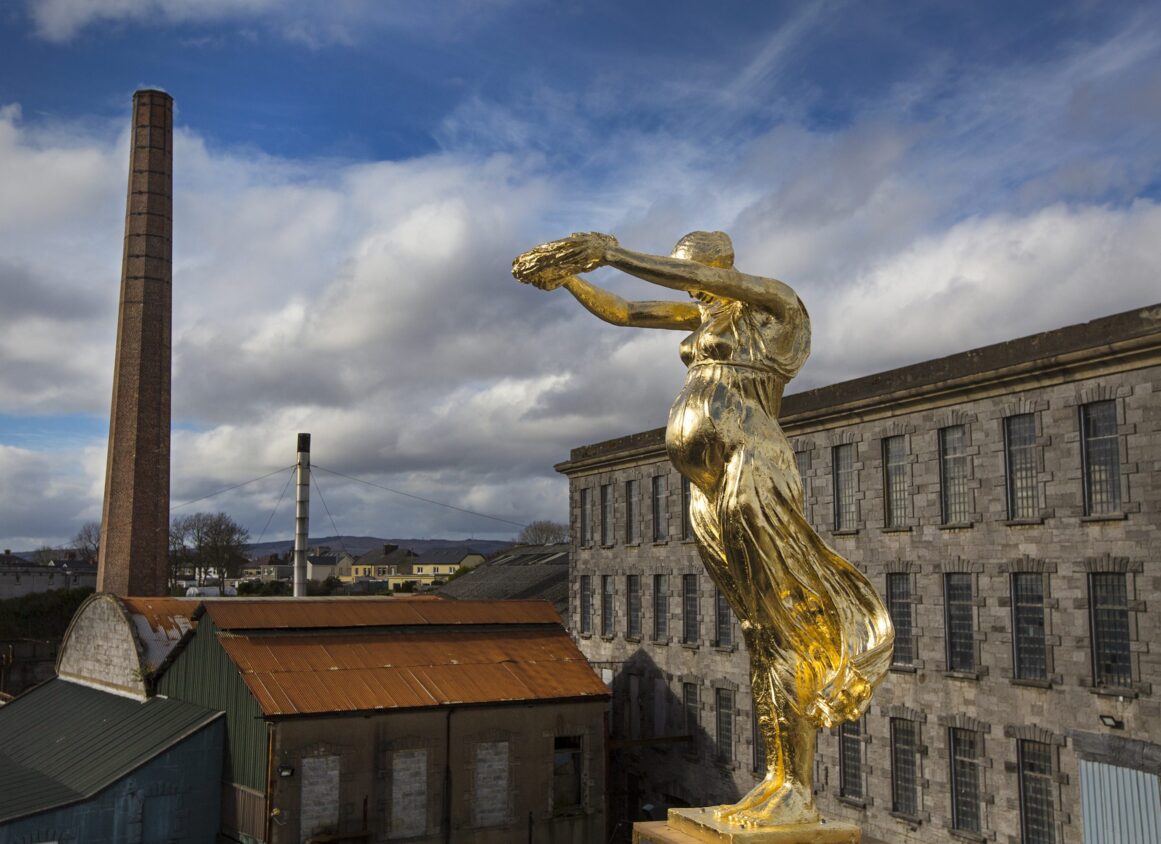 Mary Conlon: In developing the 38th edition of EVA International, you have replaced the standard ‘monolithic’ biennial model with a more complex ecology of exhibitions. Can you explain this curatorial strategy?

Inti Guerrero: It is a proposal that corresponds to the simultaneous multiplicity of perception that audiences today have developed, alongside the advent of social media. In other words, in a biennial imagined as an ecology, people can navigate back and forth through entirely distinct bodies of work and different constellations of meaning, and yet not feel the need to force a single, dominant meta-curatorial framework upon every single artwork in the show. This isn’t to praise eclecticism for the sake of baroqueness, or to fall into cultural relativism of meaning, but to allow more freedom to the experience of an exhibition of this nature.

This strategy is also connected to the decision of not giving a title to the 38th EVA International. While researching EVA’s archive, I noticed that for EV+A in 1990, the curator (then called adjudicator), Saskia Bos, radically proposed giving a title to the exhibition for the very first time in its history. Bos’s show, titled ‘Climates of Thought’, told a story and proposed a concept – the ‘monolithic aspiration’, as she suggested in the exhibition catalogue. My intention of departing from this curatorial tradition of naming the exhibition, is primarily meant to emphasise the word ‘International’ in the biennial’s existing title. In our current state of nationalisms, hard borders, protectionism and a dismantling of the liberal belief in “never again”, the term ‘international’ suddenly carries an important weight. I believe this must be celebrated. Despite its modest scale and the fact that it does not operate from an ‘art capital’, EVA has been a forerunner in understanding the world through art within a transnational, transcultural and international dialogue since its foundation. In my view, this is what we must still celebrate. MC: The thematic inquiry of the 38th EVA International is underpinned by Irish historical and art historical concerns. How did you balance national concerns with the international expectations of the biennial format?

IG: This edition sees a significant increase in artists from Ireland, compared with recent editions of EVA. Most notably, along with active Irish artists of our time – such as Sam Keogh, whose newly commissioned sci-fi work is currently showing at Cleeve’s Condensed Milk Factory, and Isabel Nolan, who presents new versions of her chandeliers of colour – we have also incorporated specific pieces by art historical figures, including works from the 1920s and 1930s by Seán Keating, Mainie Jellett and Eileen Gray. It is these artists and their works that underpin the narratives on hope, idealism and, ultimately, the deception of the nationhood project. The biennial seeks to curatorially reframe these early twentieth century artists within the context of present-day discussions. While researching Jellett, for example, it was remarkable to find that within her fauvic and cubist experimentation abstracting the icon of Virgin Mary and Baby Jesus, she paradoxically dedicated work to reproduction and even abortion. The ideological field of debate surrounding pregnancy is also found in the work of international artists, like Sanja Iveković.

Keating’s magnificent paintings depicting the construction of the Shannon Hydroelectric Scheme have a more prominent representation. The main constellation of works at Limerick City Gallery of Art and Cleeve’s Condensed Milk Factory features practices addressing the subjects of electricity, light, power and related metaphors. The construction of power plants in itself is perhaps the most immediate and readable thread amongst works like Inji Aflatoun’s surrealist paintings and Malala Andrialadideazana’s new commission, featuring enlarged banknote collages of illustrations of dams and other major civic engineering projects used by many countries as state propaganda. Similarly, Aflatoun (b.1924–d.1989) was one of several artists and writers sent by the Egyptian government to create art devoted to the construction of the Aswan Dam on the Nile – an icon of modernisation and Pan-Arab nationalism, inaugurated by Egyptian president Nasser and Russian statesman Khrushchev in 1964.

The open call for artists received around 2,500 applicants and the inclusion of artists coming through this mechanism either enriched the existing subjects described above, or catalysed entirely new and different thematic threads. This was particularly the case with Ian Wieczorek, an artist based in County Mayo, to whom I am grateful for his insightful approach to the subject of emigration, which simply cannot be ignored by a biennial in Western Europe today.

MC: The Shannon hydroelectric scheme was a bold undertaking for a newly formed Irish Free State, resulting in the largest engineering project in world at that time. How did your visits to the Ardnacrusha power plant in Clare and the archives at ESB Headquarters in Dublin become the curatorial inspiration for this year’s EVA?

IG: It was actually during my first visit to Limerick more than 18 months ago, when I came across Keating’s social realist painting, Night Candles are Burnt Out (1928–9), at The Hunt Museum. This first drew my attention to a subject that quickly became an obsession with these dam histories! I was well aware that there have been exhibitions and extensive scholarship devoted to Keating’s work (especially by art historian Dr Éimear O’Connor) and that there have also been recent in-depth documentaries and writings on Ardnacrusha. Therefore, I had to consider what a biennial could do differently, and how to propose connectivity across practices and artistic languages. One important element within the show is highlighting the ways in which people take the use of electricity for granted. It has become naturalised as part of our habitat, running our technologies and charging our electronic devices. Electricity also plays a key biopolitical role in the production of capital, continuously extending working hours and stretching our notion of time. Yet, there isn’t widespread awareness of the fact that there are many populations around the world that still do not have electricity at home, no public lighting, nor that there are major metropolises like Lagos and Beirut with daily power cuts resulting from systemic corruption. This specific subject is addressed in the photographic work of Nigerian artist, Uchechukwu James-Iroha. Similarly, in Viriya Chotpanyavisut’s work, the silhouette of a fisherman and his impoverished reality in the darkness, contrasts with the glittering light of Bangkok’s neo-liberal cosmopolitan skyline.

My visit to the ESB HQ was instrumental in learning more about the complex narratives surrounding the construction of the hydroelectric dam and its aftermath. The ESB’s Rural Electrification Scheme was as important as the construction of the dam itself, because it concluded the construction of the national grid, completing the ‘electrification of the nation’. This was a revolutionary moment that placed Ireland ‘on track’ after decades of underdevelopment in non-metropolitan regions. A new film project by Adrian Duncan and Feargal Ward is grounded in these themes, exploring the massive importation of Scandinavian trees used for the electricity poles by the Irish government in the 1930s and 1940s.

MC: Following up on your earlier reference to the works of Mainie Jellet and Sanja Iveković, how has the upcoming referendum on the Eighth Amendment within the Irish constitution informed the biennial’s engagement with gender politics and the bureaucratic structures controlling the female body?

IG: Decriminalisation and legalisation of abortion is a major subject in many parts of the world. Ireland’s blind exception amongst the legislative abortion reforms across Western Europe suggests that perhaps the modernisation of the state is a continuously ongoing and unfinished process. There are still many struggles for the betterment of democracy, with this being one of them. Feminism, from its first wave onwards, has been fundamental to the improvement of an unequal and unjust citizenry. The Artists’ Campaign to Repeal the Eighth Amendment is therefore an important cultural production to bring into discussions at the 38th EVA International.

Mary Conlon is the founding director of Ormston House, Limerick.

Inti Guerrero is currently the Estrellita B. Brodsky Adjunct Curator of Latin American Art at Tate.