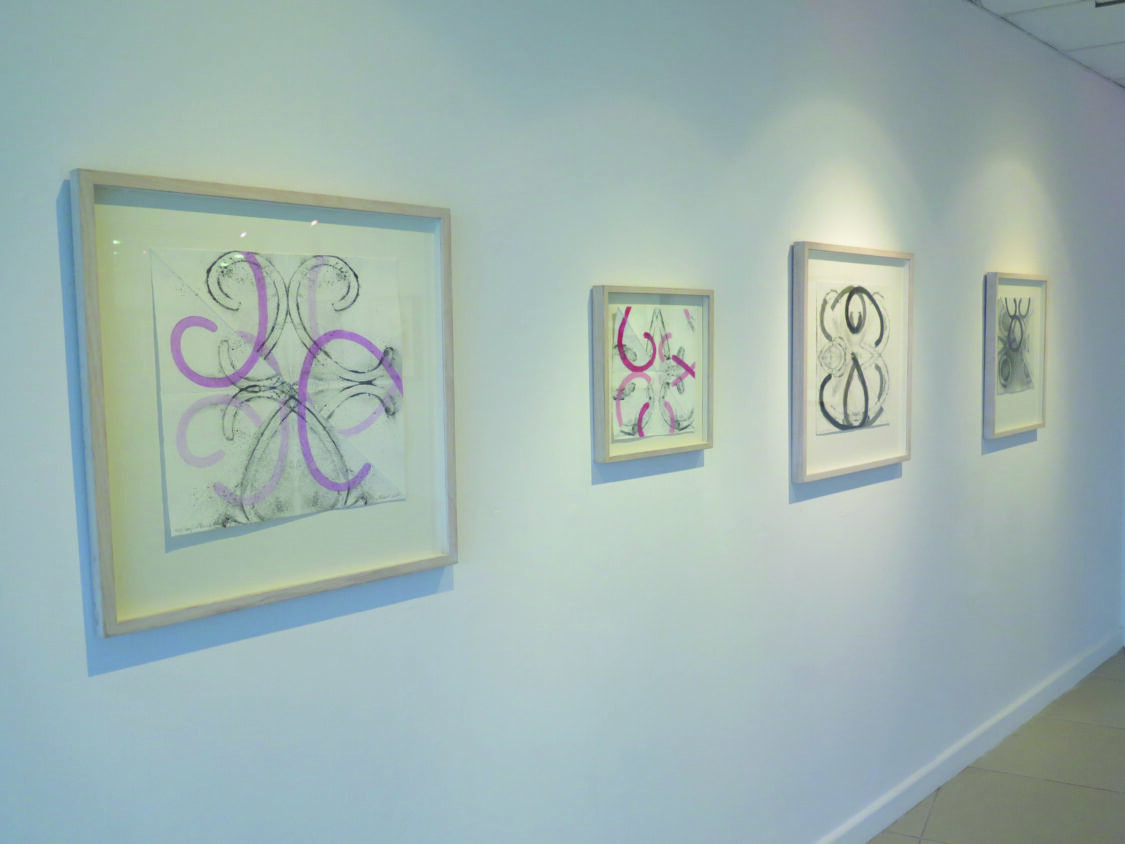 Robert Kelly is a print-maker whose appetite for exploration takes his work from the flat surface into three-dimensional space. In his latest exhibition, this space is the ground-floor gallery at Draoícht, where some works are conventionally framed while others emerge and expand to more fully occupy the architecture. This choreography leads the viewer on an unfolding visual journey, underpinned by thought and process. The artworks also feature material folds, which manipulate internal spatial relations and introduce conceal-and-reveal dynamics.

The first five prints establish a link with Kelly’s exhibition ‘Interconnectedness’, held at Droichead Arts Centre in 2014. The imagery is built up in carborundum layers on Somerset paper, which entice the viewer into discerning the order in which they were laid down, while attesting to the time invested by the artist. In The Space Between with Triangles, Circles and Squares, it appears that a folded insert and background sheet were printed with a painterly texture, while outlines of the eponymous shapes were masked out and later overprinted in primary and secondary colours. The finished works are displayed with half-open pleats, which causes slippage in their geometry and creates, for Kelly, ‘liminal’ zones. The connection between these white spaces and the printed image recalls American physicist David Bohm’s theory of implicate and explicate order, in which visible and invisible elements relate in an unfolding and enfolding flow.

The rhythmic variation of the first group of images is maintained in Fold/Unfold, a sequence of four works that are diverse in terms of their scale and the way they are framed. Made with charcoal and pastel on single sheets of (mainly) Fabriano paper, they explore the interface between drawn and impressed elements. Reduced in formal complexity, and with a less vibrant palette, their recurring motifs are more calligraphic than geometric. According to Kelly, they are non-representational, but draw on ideas from astrophysics and biomedical science. They are an attempt to “understand the natural order” and allude to “the notion of things happening from within”.[1]

The style, repetitive mark-making and use of granular mediums, combine to produce almost decorative works that evoke microscopic or fossilised organisms. Displayed open, they retain creases from fold patterns, creating relief works that fluctuate between whole and partial forms while expanding the space between paper and frame. This expansionary dynamic, referenced in the exhibition title, is also found in the shift from fragmented geometry to open curvilinear forms. It gains momentum with the unframed Zephyr – Wind of Change II, mounted on a ‘hidden’ wall, which the visitor discovers upon rounding a corner. Conceived as a composite of multiple carborundum prints, its crisp, lyrical motifs are arranged within a familiar grid pattern that connects it to architectural features such as the tiled floor. But its unity is tenuous; the 16 sheets, each measuring 42 x 42cm, are loosely joined, corners protruding to hint at the spaces behind. Each has horizontal, vertical and diagonal (right or left) folds, scored rhythmically, with discordant elements, to suggest both stability and flux. The larger Entropy is similar in form, and introduces new linear formations that abut each other in lively, discontinuous arrangement.

The final act is a pair of sculptural offshoots of the paper hexaflexagons and folded books shown in 2014. Zephyr – Wind of Change features the printed organic motif of Zephyr II, but is the more uniform of the two, suspended from the full-height section of the gallery. It is equal and in many ways opposite to Expanding Spaces, which commences high on the wall, grows in scale as it tumbles to the floor, and features geometric, hand-drawn elements that bring the print-drawing dialogue full circle. Both unite the front and back of individual sheets – the meant-to-be-seen and unseen areas – with meeting points derived from matching fold patterns.

This is a smaller, more integrated showing than ‘Interconnectedness’, but it advances the artist’s exploration of similarity and difference through the recurrent use of motifs and materials. Kelly’s responsive practice subjects geometric form and pattern to time-based process, movement and engagement with the unseen, substituting taut order for a subtly reverberating atmosphere of change and possibility.

Susan Campbell is a PhD candidate in history of art at the University of Dublin, Trinity College.