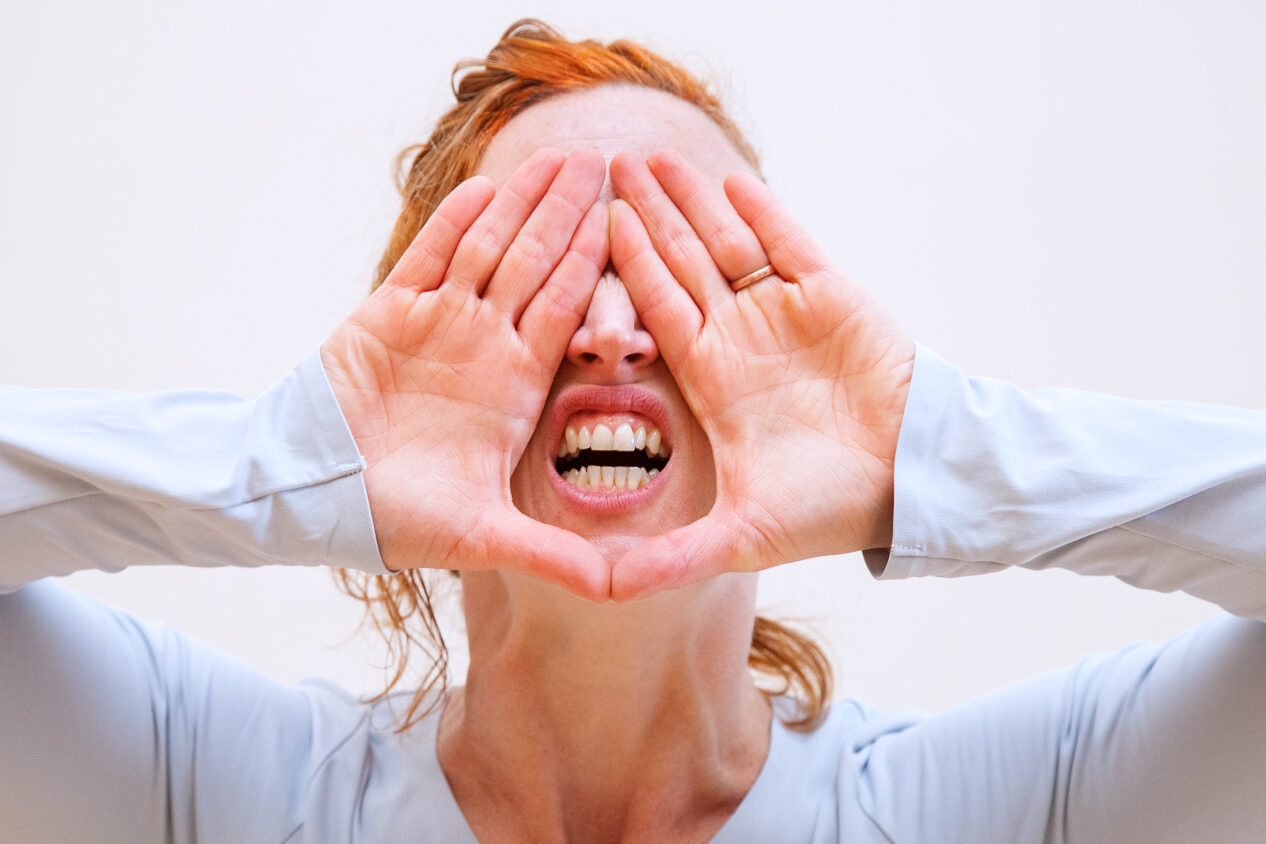 The day of the second public performance of Jesse Jones and Sarah Browne’s The Touching Contract fell on a date of heightened emotion for women in Ireland, taking place just hours after Dublin saw thousands take to the streets in the fifth annual March for Choice, part of the campaign demanding that the government repeal the Eighth Amendment. The atmosphere in the Rotunda Pillar Room’s ante-chamber was withdrawn and respectful; the audience appeared fragile.

The third chapter of four performative works in the pair’s first collaboration ‘In the Shadow of the State’ was devised in consultation with local women. [1] Feminist legal scholar Mairead Enright wrote the ‘legal score’ for the work, drawing on the archive of legal documents relating to the treatment of Irish women by the state and by the medical profession, both here and in the UK. This source material reveals a sorry history of medical misdemeanors and the enforced adoption of illegitimate children. The artists view this legacy as a history of violence against women and, given the horrors endured by survivors of symphysiotomy [2] and those who suffered incarceration at the hands of the church (in the Magdalene Laundries for example), it is difficult to argue otherwise.

Against this backdrop, the audience was required to read a set of terms and conditions, before filling in and signing a contract of consent to be touched during the activation of the work. This prompted an instantaneous wariness in me as a viewer – now a ‘participant’ – as the legalese hinted that the territory ahead might prove unnerving. “Participants shall not bring or cause or permit to be brought into the Performance any fragile hopes or expectations for the state or its laws” warned the terms. “…Notwithstanding the foregoing, any such expectations of or aspirations are carried at Participants’ entire risk”. [3]

Before entering the main performance space, participants were required to complete a contract giving their consent to be touched in a variety of ways: sexual, violent, medical, paternal – even sonic. There was the option to refuse consent and instead to act as ‘witness’, in which case one’s senses would be impeded with a blindfold and earplugs.

The scene was now set – emulating the experience of being admitted to an institution – and participants finally entered the Pillar Room. Performers dressed in pale blue and wearing nurse-like white shoes sat and stood around, waiting to be activated by the chime of a triangle, signifying the initiation of The Touching Contract.

Moving between the standing participants, the performers approached and retreated, in a loosely coordinated choreography of gestures and unspoken instructions. This voiceless show started timidly, with the per formers offering participants a listen from their MP3 players (I was given a blast of Baby it’s Cold Outside), then slowly grew in intensity as they mimed washing and inspecting their hands, framed the cleft between their legs with forefingers and thumbs to form the shape of a triangle – a woman’s sex – then raised their hands over their faces, snapping their teeth and grimacing. Jamaican pop reggae band Inner Circle’s 1992 hit Sweat (A La La La La Long) boomed throughout the room.

The performers ran through the crowd in a seemingly random sequence, at one point gathering a few male participants together. Some threw themselves at our feet, crying out or soundlessly crumpling to the floor. They reached out, beseeching us to take their hands, and then drew us closer together in an intimate huddle. Finally, each one of us was led out of the Pillar Room, in many cases embracing the performer before leaving. Back in the ante room, we were given tea and toast, like so many newly-minted mothers.

It was a visceral and consuming work. With its immersive nature (the hand of Anu Productions evident) and accelerated references to what we now know about the treatment of the Magdalene victims and the experimentation on Irish women by surgeons who split bodies and removed wombs with impunity, it felt like a kind of assault. It was a missile lobbed at the shocking complicity of the agencies that perpetuated these actions, even after the fact.

In a recent issue of Art Monthly, writer Morgan Quaintance argued vigorously for the pressing need for socially engaged work to “inform, empower and support the public by presenting and elucidating the subject matter of works dealing with contemporary socio-cultural and political realities that, through bias, oversight or lack of interest, are not presented elsewhere”. [4] Though he was discussing such work in the UK, the ferocity and conviction of The Touching Contract proves an unassailable force in the face of such oversight – the political as absolutely personal.

Anne Mullee is an art writer and curator of the Courthouse Gallery and Studios in Ennistymon, County Clare.

[2] The practice of symphysiotomy involved the severing of a woman’s pelvis to assist childbirth. See symphysiotomyireland.com.