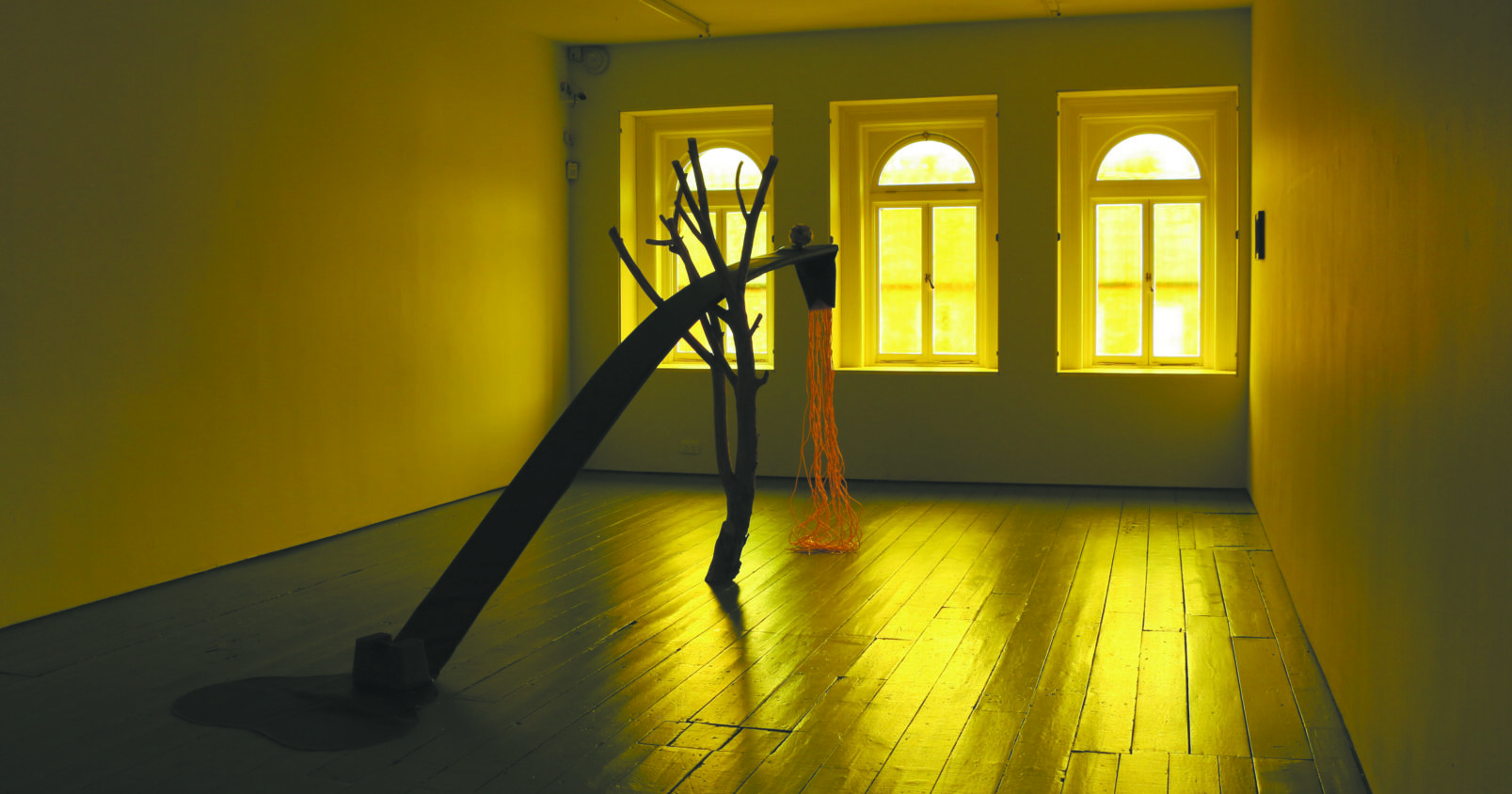 Paul Murnaghan’s exhibition ‘All Mountains Are Moving’ explores archaic belief systems by courting wonderment and superstition. This new body of work refers to outmoded ways of magical thinking, but also arouses a sense of mystery in the viewer through a clever use of materials and techniques that make us question what we are seeing.

‘All Mountains Are Moving’ is exhibited upstairs in Limerick City Gallery of Art across numerous rooms around the square first floor balcony space above the Atrium Gallery. The first room on the right omits a yellowy glow, created by an orange stain on the glass window. In the middle of the room is the sculptural work The stars don’t shine upon us, we’re in the way of their light. This is composed of an unlikely and precarious combination of materials, including an arching arm of plastic covered in fake leather, which is held up by part of a peeled tree branch. Nothing is fixed, but rather employs and seems to transcend the laws of gravity. At one end of the arm is an antique weight which roots the structure to the floor. At the elevated end is a hoover-like mouth with synthetic orange rope hanging from its end. Above this, and at the peak of the arch, is a levitating feather-covered ball that rotates slowly around in the air. This element of the sculpture is captivating and introduces the pervasive sense of mystery and magic that permeates the exhibition. The feather ball also adds an air of fragility to the piece as all the disjointed materials appear to be harmoniously balanced, yet could fall apart at any moment. Through its materiality, The Stars … recalls a lineage of conceptual sculpture by combining the drama of Richard Serra’s balancing steel works with the natural materials of ritualistic practices used in the sculptural installations of self-appointed shaman Joseph Beuys.

In the corner of the balcony space is the work Balance, which reinforces this comparison. Balance is composed of a lead sculpture resting atop an antique wooden pedestal. It looks as if it should fall over, as one of the legs is shorter than the others. The sculpture is an intricate web of forms and was made by pouring molten lead into water. When these two substances come into contact the metal crystallises into elaborate patterns, a process known as molybdomancy, which originated in Ancient Greece where it was used to tell the future. Despite the many references to divination and mysticism, the self-serious persona of Beuys does not apply to Murnaghan, who instead presents these ritualistic practices in a refreshing, childlike way. In its entirety, the exhibition is playful and inquisitive, prompting us to look with fresh eyes at the materials and at our belief systems. The biggest of the upper-floor rooms holds a diorama of miniature gold animals, most of which are hybrid species, combining, for example, the body of a goat with a fish tail for a head. These animals converge around a flickering lake on a bed of fake fur. Scattered around them are pebbles that have been split in half by the artist’s grandfather Loftus Lowndes. The humble pebble becomes an object of fascination as the diorama is juxtaposed with a large-scale projection, 100 Stones. This comprises still images of the split stones, intensely magnified, accompanied by ambient music and the sound of a high symbol or triangle, which brings to mind eastern religious practices. The projection is immersive, hypnotic and meditative. The rusty orange and grey-blue patterns in the stones evoke the expansiveness of the cosmos and this gives rise to the elusive perception of something essential and primordial in what was previously small and insignificant.

‘All Mountains Are Moving’ gently prompts us to reflect on the meaning of life and the meaning of death. This reaches its climax as we move around the space and into the final room. Here, a more sombre sculptural installation is made up of, among other things, the donated ashes of a man named Robert Paulson. These have been emptied onto another antique pedestal. It is unusual to see the ashes of the deceased, which normally remain out of sight, concealed within an urn, buried underground or scattered into the wind. Offered up for visual contemplation, the ashes are surprisingly voluminous. Looking closely, chips of bone are visible. Somehow, studying these remains doesn’t feel morbid, but rather testifies to the interconnectedness of things as Murnaghan again grounds us in the matter of the world. ‘All Mountains Are Moving’ invites us to contemplate the relationship between small stones and the cosmos, between these ashes and ourselves: our return from dust to dust.

Kirstie North is an independent writer, curator and artist who teaches History of Art at University College Cork.

Images: Paul Murnaghan, The stars don’t shine upon us, we’re in the way of their light and Balance.