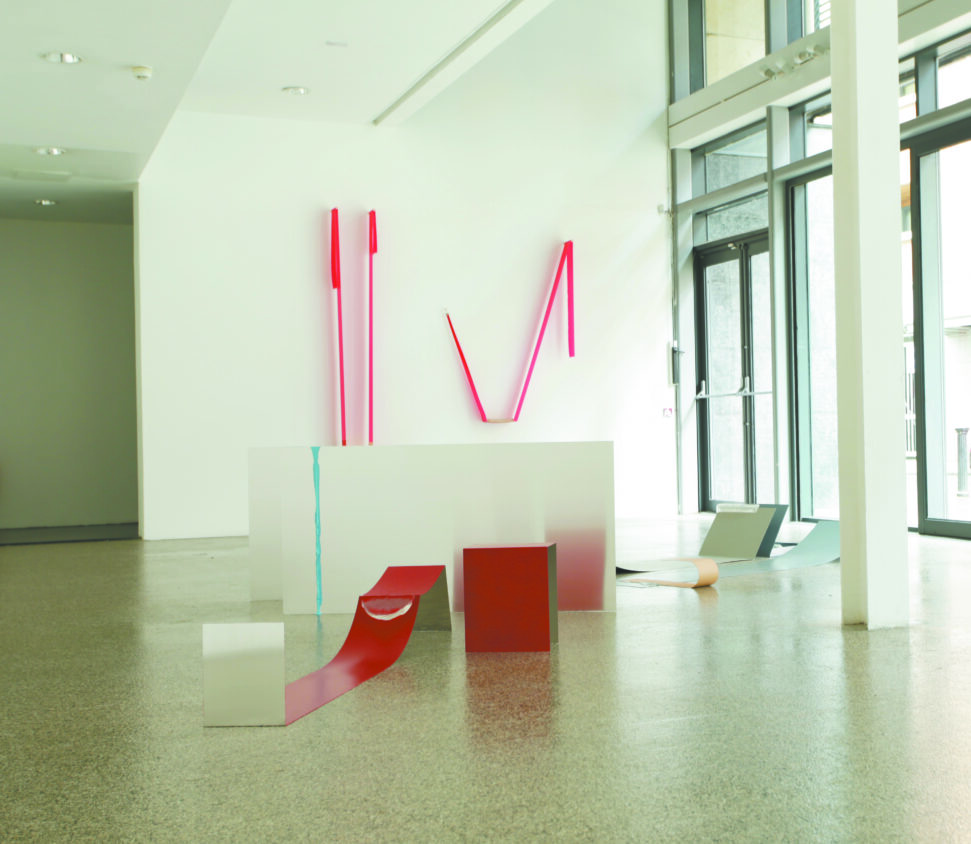 In 2015 Bridget O’Gorman was invited to respond, in collaboration with research partners and institutions, to the 1916 Rising in its centennial year. So began 12 months of site visits with historian Brenda Malone at the National Museum of Ireland at Collins Barracks and a collaboration with writer Sue Rainsford. O’Gorman’s response is the first in a series of such exhibitions commissioned by The LAB, a gallery which regularly facilitates cross-disciplinary collaborations. Entering the ground floor gallery, the eye is drawn to the opposite wall. Two red bands slash down the wall like slings, weighted into shape by abstract blocks of the clear substance they hold – ballistic gel, we are told. The floor is scattered with aluminium structures: strips that rise, fall or fold at various points, interspersed with blue drips and further blocks of ballistic gel. An open-topped box reveals a clay heart and fist. A sealed box and a table, topped by an arrangement of small clay objects complete the display.

The next room houses the first video piece, In the Flesh (Re-enacted), in which a museum conservator’s hands carefully clean a rifle. The gun, once an instigator of violence, appears vulnerable and in need of care. The rifle is no longer functional but instead symbolic, a tangible link to the past. This juxtaposition of hard, rusting metal with soft hands, full of life, ties into a recurring interest of O’Gorman’s: aligning materials which provoke contrasting sensations. A hypnotic droning soundscape reflects the concentration of the action and conjures a sense of the tension of the Rising.

Upstairs, the second video piece, In the Flesh (Slow Tear), depicts the storage space that currently holds the National Museum of Ireland’s Easter Week Collection. The families of those involved in the 1916 Rising and the War of Independence donated this accumulation of items and personal effects. The film presents mundane objects – lockers, shelves and boxes – in a stark way, enriched by Rainsford’s voiceover, which brings to life the precious historical and personal artefacts hidden safely from view. One of the opening lines in the script, “I’m being ever lessened by the hurtful properties lain latent in the air”, recalls the rifle in the previous video piece and reminds us why these objects are stored away. This video piece comes in advance of an exhibition planned for March 2016 at Collins Barracks, for which a selection of these artefacts will be displayed for visitors to browse.

Multimedia shows can sometimes feel disjointed, comprising standalone elements combined by a common thematic thread but missing a narrative. In this show, the two video works and the objects in the main gallery space each attain a new meaning and depth once they are experienced as part of a whole. The materials in the ground floor space offer a static yet tangible link to elements referenced in the video pieces. The aluminium strips echo the sterility of the storage space. Supporting documentation tells us that museum professionals simulate bullet impact or other similar trauma to flesh by using modelling clay and ballistic gel. The human body and its relation to inanimate objects is a theme considered throughout the exhibition. The little objects on the gallery table, moulded from clay and displaying fingerprints, echo the careful touch of the conservator’s hands on the rifle, which itself gains new life through Rainsford’s emotive script in In the Flesh (Slow Tear). In an interview for RTE Radio 1’s Arena, O’Gorman notes that, sometimes, “experience exceeds conventional use of language”. Rainsford’s words succeed in projecting a sense of bodily trauma and violence, giving new sensation and a human connection to a past already evoked by the rifle.

These complementary works serve to highlight the place of curation and narrative in exhibitions. Artist, historian and writer join their respective expertise to create a rich and rounded exhibition linking the viewer to the past. The year ahead will see countless 1916-related events take place. This exhibition demonstrates that art can address these issues in an indirect way, leaving space for the viewer’s imagination and encouraging us to consider the links between works in order to gain a fuller experience. ‘In the Flesh’ is a fitting prelude to the ‘people’s exhibition’. It will facilitate a new way of experiencing the artefacts, while deepening our appreciation of the people who have ensured their survival.

Roisin Russell is a writer based in Dublin. Her writing has featured in Paper Visual Art Journal and Circa online.