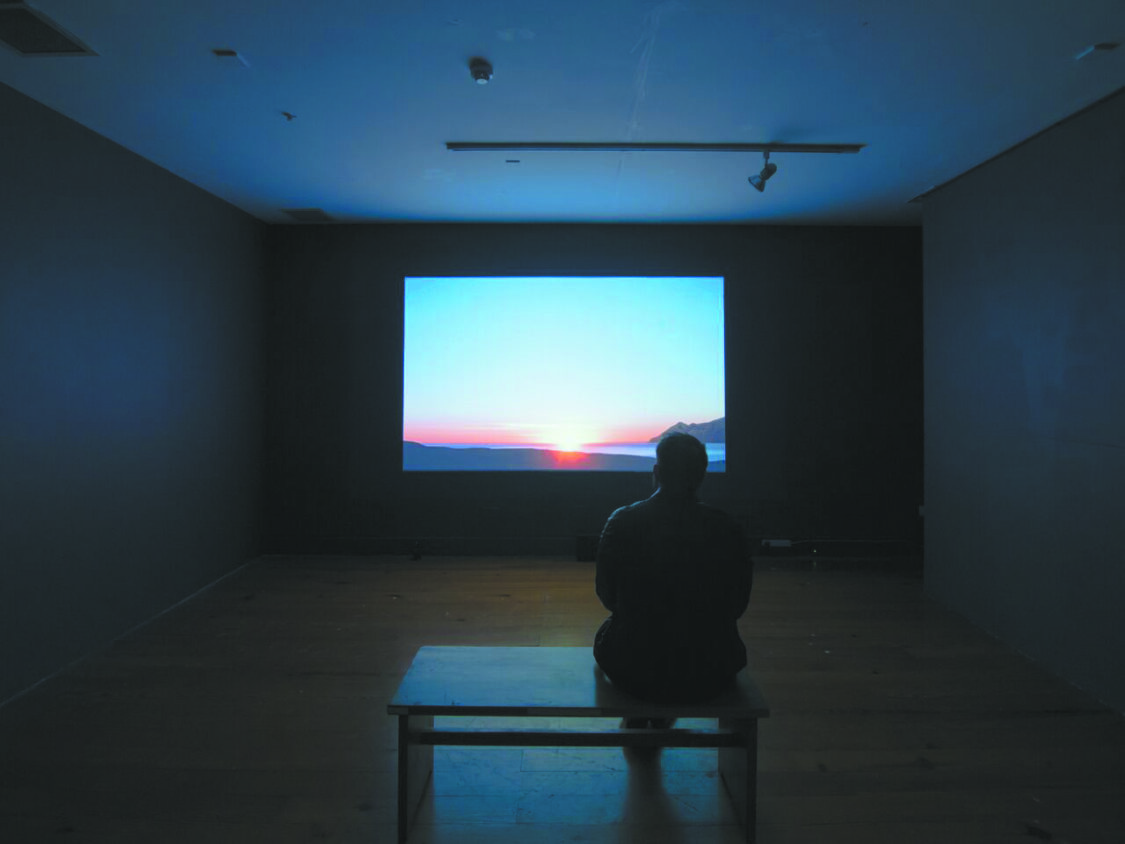 Boundaries and partitions are staple themes in Irish cultural production. Over the last 100 years the Irish have struggled with the realities of a physical border, alongside metaphysical, social and political divisions. In this centenary year, such themes convey the complexities of our national identity. The three artists in this exhibition all explore aspects of what borders mean in relation to the passage of time. On the ground floor of Galway Arts Centre (GAC), Niamh O’Doherty interrogates the experience of time. Her video work The Enlightenment (2016) compares our measurement of time with the passage of time in nature. It was shot on Hrísey Island in Iceland and filmed during two research trips, once during 24 hours of daylight and again in 24 hours of darkness. In this intriguing 12-minute piece, film of a fixed-viewpoint seascape is imposed onto a drawn background, which follows the contours of the panorama but often slips ‘out of register’. We see the video image on screen for a few seconds before, staccato-like, the image flashes to a white background inscribed with errant contour lines, disrupting our expectations.

O’Doherty travelled to Hrísey Island on residency after obtaining Rehab funding. Set in a narrow fjord just south of the Arctic Circle, the island has 24 hours of daylight in summer, and only two in mid-winter. This flux in the manifestation of time is reflected in Fragments of Landscape (2015), a photographic montage of Hrísey Island from the sea. It is fractured, deconstructed into interlacing segments, but merges together with cubist grace. There is a sense of historical moments intermingling with the present as images proceed unexpectedly from black and white to saturated colour.

Victoria J. Dean’s series of sophisticated photographic works meticulously document familiar structures erected by local authorities along the Irish coastline. Her images reveal a human compulsion to rationalise space and to control the environment. Dean records various examples of seaside architecture – from public lavatories to bus shelters, promenades to leisure areas – highlighting the tensions between nature and encroaching human development. A contested borderline is revealed between nature and human time – a loss of innocence in our engagement with the environment.

According to Dean, “the various fortifications, including urban furniture, encourage us to survey the natural environment from the safety of the manmade, be it from behind a wall, or from a bench”. She provides a contemporary iconography of coastal spaces as borderlands between the elemental and the artificial. Sometimes referencing soviet or military architectural structures, these photographs also recall Willie Doherty’s disquieting images of Derry-Londonderry in the 1980s. In the series Lifeguard Station I – VI (2012), a forbidding metal container appears as a dominating fortification, existing to defend and command nature. In Signs I – VII (2012) public signage mediates the liminal border between the land and sea, seeming to restrain the inevitabilities of both time and loss.

Laura Smith’s HD video work When All is Said and Done explores time as represented through human memory, traces of past conflicts through personal stories and boundary-making through environment. A local man somewhere on the Ulster border tells of the overnight disappearance of surveillance equipment at a key moment in the peace process. In another sequence, a young woman runs through an immemorial landscape, expressing absolute freedom and fearful escape in her fervent physical action. The video format shifts from full screen to circular frames with poetic nuance as the narrative slides enigmatically from fact to fiction.

Smith creates compelling visual and performative images in her investigations of political and social restrictions, specific to Northern Ireland but still universally relevant. Through a combination of scripted acts, a stunning sequence of fleeting, swirling texts, documentary and found-footage, the video focuses on histories of forced division and deportation of communities. The meaning of the Troubles in Ireland and its intimate aftermaths become the subtext to this work. Historical and present-day border conflicts are explored, provoking themes of social disruption and transformation.

At the nucleus of the video is a beautifully presented account of the Diomede Islands in the Bering Strait: two islands situated on either side of the International Date Line, 3.8 km apart, with one island belonging to Russia and the other to the USA. Travel between them is illegal despite the ice bridge that unites them during the winter months. The story of these islands is one of division and conflict caused, and the loss of the islanders’ familial connections and heritage. The Diomede archipelago becomes a metaphor for the fragmentation and rupture that artificial borders can produce. Responding to this, the works in this exhibition convincingly provide a healing process for these momentous injuries.

Áine Phillips is an artist and writer based in Clare. Her current project is a speaking tour of the USA with her new book Performance Art in Ireland: A History, published by Intellect Books and the Live Art Development Agency, London (2015).