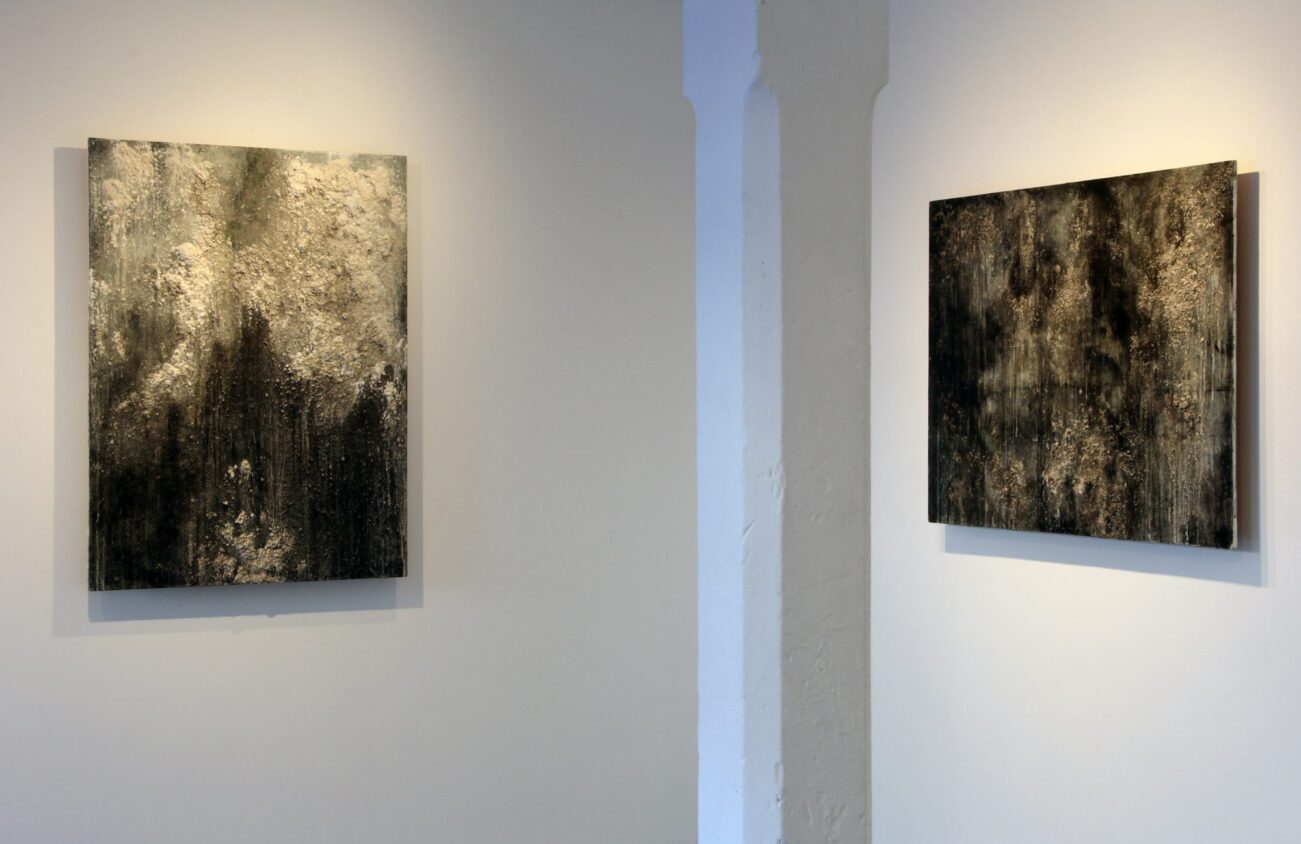 Klaudia Olszyńska’s exhibition at Studio 12 in Backwater Artists Group consists of four mixed-media works that could be best described as ‘expanded paintings’. The exhibition takes its title from the GPS map coordinates of an area revealed via Google maps to be along Fennell’s Bay Road in Myrtleville, County Cork. The resonance of the works is posited (in a paragraph-long contextualisation) as residing in the abandoned buildings present at the places with which they share coordinates.

The colour scheme of the works revolves around blacks, greys, off-white plaster shades and diffused, near mould-coloured greens. All contain the downward drips of watery paint. They also feature areas of exaggeratedly built-up paint, forming porous structures that protrude an inch or two from the board onto which they are applied. Two works are in portrait format, the other two in landscape, with slight variations in size. The general aesthetic scheme quite clearly signals decay, with stains and spills signifying the wearing down of constructions over time.

The paintings’ glazed surfaces are what struck me most, when viewing them up close. Echoing the gloss of ceramic tiles, these varnished surfaces seem caught or fixed in place. Visually, they contrast with the implied movement found in the spill patterns. As things deteriorate, they are said to ‘lose their sheen’. Patently, these works are in a state of ‘constructed deterioration’, rather than being the products of destruction or gradual deconstruction. However, it is hard to feel upbeat in the presence of these works. They capture a field of aesthetics that is too often presented in a romanticised manner – think of the ruins depicted in a Caspar David Friedrich painting, for example. In traditional Japanese aesthetics, the notion of wabi-sabi centres on a belief that the workings of time should be appreciated. The gloss and sheen of the new are deemed fleeting and trivial, while aging and impermanence – manifested through imperfections, such as a rustic patina – are venerated. There is no sublime persistence of an object in time; there is only its engulfment in the mouldy stains of decay, until these features are all that remain. Time can express itself aesthetically and affectively in many ways, through blossoming, maturing and decaying. Decay continues long after death and is consequently something that is not specific to its object. Olszynska’s paintings, motivated by experience of ruins, transform a natural occurrence into an artwork, thus valorising this process. However, in contrast to wabi-sabi principles, this decay is fixed in a specific configuration and prevented from continued decay.

Interestingly, photographic reproductions of Olszyńska’s paintings seem to aestheticise the works too much. In this digital format – with everything flattened and illuminated onscreen – the works do, in fact, hold a sublime aspect. The hardness of the glaze disappears from view, replaced by ‘pretty’ diffusions, as opposed to stains. However, in reality, these works are more confrontational, as they actively investigate how to properly capture and present decay. We must read these works according to how decay marches forward, becoming harsher and more brute, as opposed to notions about entropy. There is a sapping and slowness to the entropic process – a gradual depletion. By contrast, the aesthetics of decay are built upon a flourish of sorts, evident in the piles of paint and mounds of plaster, their heavy textures veering towards organic sculptural forms.

Decay is an omnipresent phenomenon, yet Olszyńska responds to a concrete instance with a bleak palette, abstract title and sculptural forms, thus bridging the gap between something local and something universal. According to the exhibition text, the artist was moved by the “memories ingrained in the fabric of abandoned buildings”, but as viewers, we are blocked from knowing this place in such a direct manner. However, being tied to a specific place need not foreclose our engagement with the work. We can interpret the title’s coordinates as signifying something beyond the place they refer to, expressing a tension between abstraction and specificity – features that the works themselves embody and rely on.

John Thompson is an artist and co-curator of The Guesthouse Project, Cork.