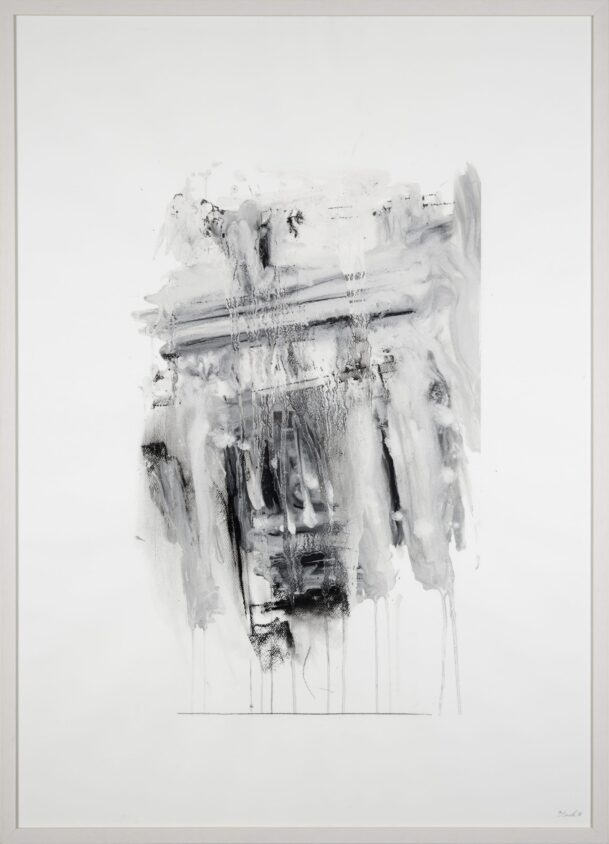 Bren Smyth’s ‘Substance of Things’ at Pallas Projects/Studios consisted of nine framed works on paper. Curated by Róisín Bohan, this was Smyth’s first solo exhibition, which was funded by Dublin City Council. The Artist-Initiated Programme at Pallas has proved crucial in the Dublin context, where accessible platforms for emerging artists to exhibit their work appear to be diminishing.

The nine works displayed were mostly monochromatic, made using charcoal and gesso. The surface quality of each work has a tension between the chalky dry white gesso and the greasy application of the black charcoal. Most works tend towards grisaille, although there are flashes of red under-painting, referencing ideas of layering in the painting process. Gesso – more commonly used as a ground and surface to work over – is used here as a primary material. The works are gestural, with materials being dragged, rubbed, dripped and mixed. There is a sense that the works are formed in the process of application. The Fabriano paper bears the folds and creases of contraction, often emanating from a central point. There is also a conscious choice in using paper that buckles under moisture, with some surfaces being reminiscent of the hydrophobic bleeds commonly seen in lithography.

There are other formal tensions in the work between abstract gesturalism and suggested figuration or architectural drawing (which have been previously described as ‘Portraits of Cities’). However, these representational possibilities are more hinted at than explicitly shown, and there are discrepancies between drawn and painted application. Titles such as Corinthian or Ban hint at the impetus behind each work. The compositional structures are often dense and active, framed by areas of sparseness where the paper is untouched. Smyth seeks to combine a playful haphazard primitivism with a considered and refined approach. The material application seems to eschew brushwork in favour of a haptic tactility, where gesso is mixed by rubbing or spilling by hand. The surfaces are mutable, provisional and fluid and delight in the viscosity of the medium. In a written response to the exhibition, Sue Rainsford reflects on the signification of the embodied mark as something that is “immediate and inscriptive or extrapolative and expressive” and leads to ask the question “at what other levels do they function?” Contextually, the work makes reference to the Altamira cave paintings and the eternal essence of painting, with an intuitive free play of materials that has been a constant throughout painting’s history. They also recall the gestural materiality of High Modernism, found in the paintings of artists like Cy Twombly, Jackson Pollack or Philip Guston. Guston’s transition from early gestural abstraction to the late cartoonish representation is often referenced in illustrating a shift away from the purity of High Modernism – an elitist world free from meaning – towards the untidy resolutions and cultural impurity of later work. Indeed, there has been a recent turn in painting towards a materiality that is uninterested in the ideological positions of Modernism and instead uses materials as a thought process, freeing painters to take more individualistic approaches to the language of painting. There is a stated interest in contemporary painting being both the subject and the object.

It is perhaps the in-between-ness of these works – situated between gesture and consideration, accident and deliberation, subject and object – that aims at an open ambiguity and layered enquiry within Smyth’s practice, generating constructive ambiguity and a simultaneous occupation of various positions. This positioning can result in poised tension between binary points or it can fall into a greyness, where neither position has been pulled to a significant degree. Smyth evidently lives in the moment of making these works, tapping into the eternal primacies in painting, where most painters experience the seduction of the material’s tactile qualities. However, a critical conversation with the chronology of gestural painting and how that functions in the contemporary context would deepen the concerns of the artist’s emerging practice, as it continues to unfold.