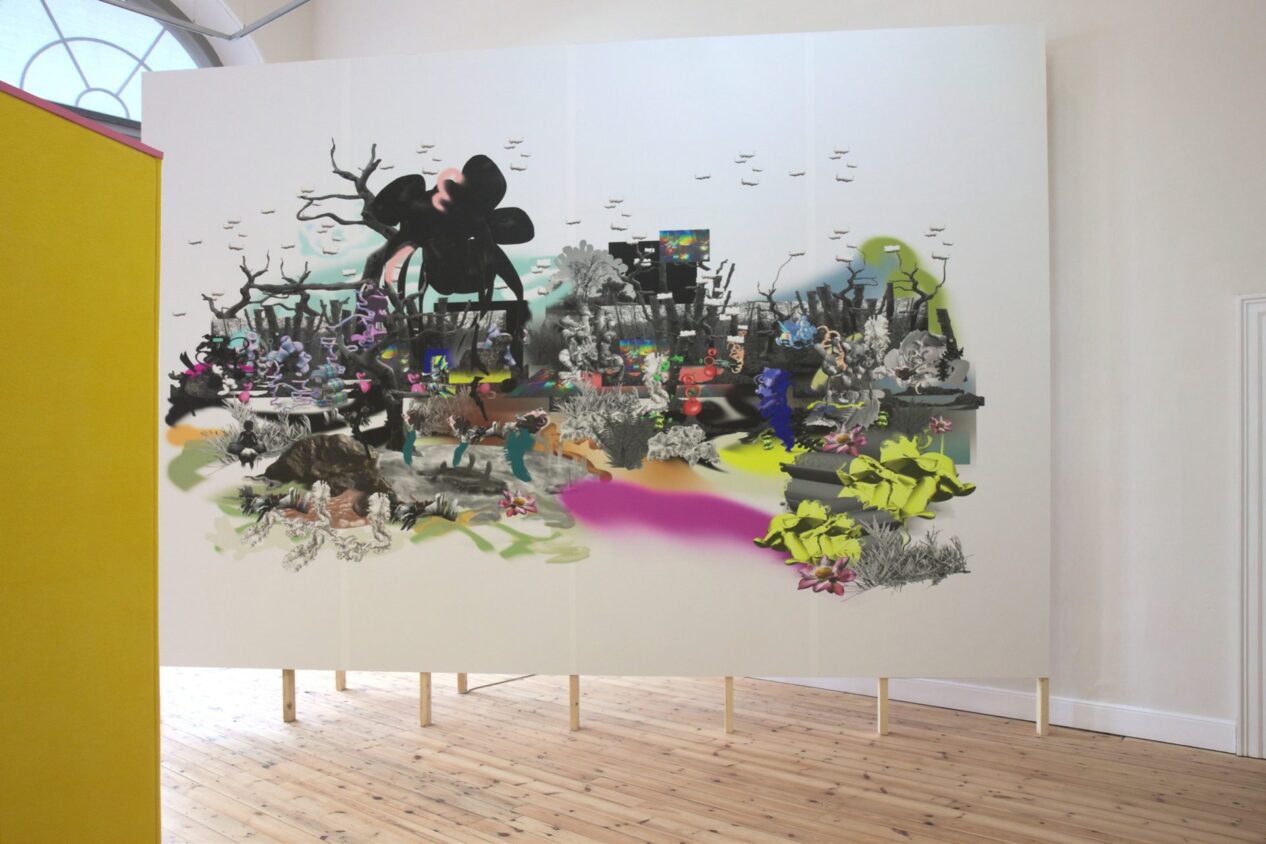 ‘Like Me’ is a show which demonstrates the continued relevance and vitality of painting and drawing. Amongst other things, the three artists explore relationships between two-dimensional artworks and architectural space, while art of the past acts as a source of joy and inspiration, rather than as a ‘dead hand’, stifling creativity.

Alice Hanratty’s newly-commissioned work, Procession, is a frieze of head-and-shoulder profile portraits, based on Cinquecento paintings, such as Piero della Francesca’s The Duke and Duchess of Urbino (1467–72). The works, which form a continuous frieze around The Dock’s central hall, are also exhibited as individual works on paper in Gallery One. The transformation of the loosely painted, easel-size paintings into a large-scale architectural intervention changes the character of both the artworks and the architectural setting, allowing viewers to consider the previous functions of the former courthouse building that The Dock occupies, and the gentler flow of people that now circulates. Hanratty’s frieze is reminiscent of Benozzo Gozzoli’s Procession of the Magi in the Palazzo Medici Riccardi in Florence (1459 – 60); however, the figures we see depicted here don’t seem like nobles and kings, but everyday people. Also on display is Hanratty’s dexterous use of paint. The brushstrokes tread a delicate line: they describe the motif, while at the same time operating quite independently of it. The pencil line that carries the descriptive structure of the figures is succinct and right. There is a sense of control over the medium, allied with a sense of exhilaration in the painting process. The way the figures are quoted and reused within the frieze brings to mind the appropriated imagery of Pop Art. However, the figures here are not merely a prop to hang virtuoso painting onto. Freed from their role as participants within a narrative, we are asked to ponder their function: perhaps they are the artist’s much-loved companions or guides?

Entering Gallery Two, one encounters a giant billboard-sized work by Kian Benson Bailes. The work is angled against the wall, dazzling the viewer with its sheer scale before one can grapple with its dense imagery. The digitally-generated drawing is made up of hard-to-define architectural forms, natural elements and fragments, with the format and compositional structure resembling a landscape painting. In the foreground are monochrome forms, reminiscent of bleached coral reef. In the middle ground, a black and white photographic section depicts a forest, while the space at the top of the composition is scattered with heavy geometric clouds.

This structure is fragmentary, shifting and elusive, creating spatial disorientation reminiscent of Pop Art’s collaged surfaces, which conflated the upbeat messages of advertising whilst questioning society’s acceptance of consumerism. Benson Bailes’s work refers to the idealised spaces of AutoCAD design, a seductive platform used to sell us everything from designer kitchens to housing estates, while referencing the immersive and addictive parallel world of video games. On the reverse of the huge billboard is a small video monitor, showing the looped digital video, Untitled 2, which consists of tilting and shifting montage-imagery. This small, screen-sized interface provides a counterpoint to the huge billboard, playing with the idea of scale. In this piece, and in two accompanying works on paper, architectural references allude to plans for ideal spaces, as fragmentary and partial figures appear and disappear. In the same space, Eleanor McCaughey’s paintings are shown in a partitioned area with brightly-coloured, patterned and fleece-covered walls. The installation calls to mind the full-on aesthetic of the Postmodern design collective, the Memphis Group, while evoking the visual language of MTV and early music videos. The effect is a powerful statement, highlighting a process of art historical appropriation that permeates the entire show, creating a rich visual experience.

The paintings themselves play with conventions of portraiture and still life. They offer naturalistic renderings of constructions that the artist has made with detritus, molded together and often bathed in oozing masses of paint. They reference classical portrait busts but resemble traditional still life paintings, in their lighting and deadpan handling. Like Baroque fantasies, they play with the viewers’ expectations of portraiture and teasingly question our credulity in front of these seemingly flat images. The synthetic colours and materials used to make the original sculptures are entirely modern, while their abject nature as objects arguably occupies an intensely critical position in relation to contemporary visual culture. However, the framing of the paintings within their own joyfully kitsch mini-gallery mitigates against any such straightforward readings. As well as inviting us to think about how we represent ourselves, and how we view each other, McCaughey, like the other artists exhibiting in ‘Like Me’, demonstrates a commitment to giving the viewer a richly visual experience.

Andy Parsons is an artist based in Sligo. He is the founder of Floating World Artist Books.