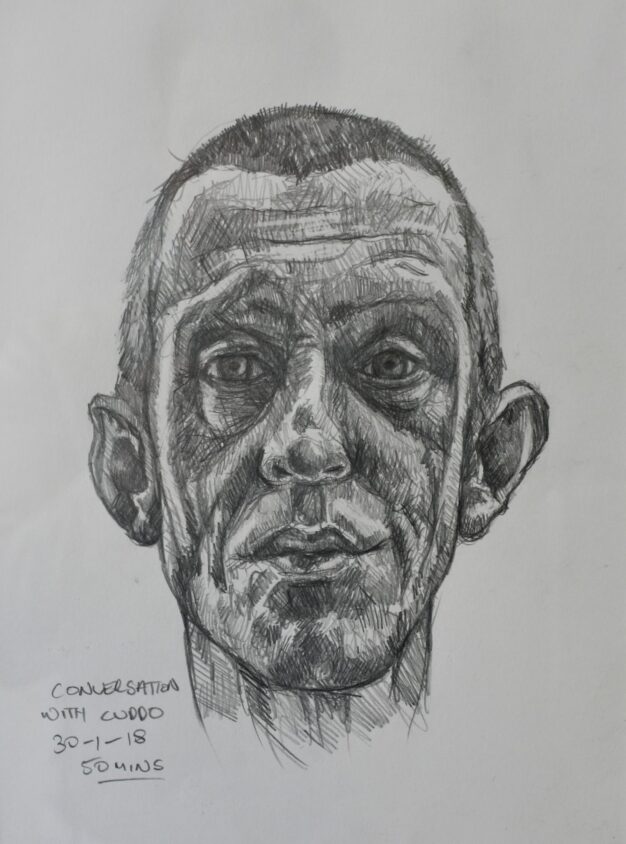 The French novelist, Gustave Flaubert, an exponent of literary realism, once stated that “the artist must be in his work as God is in creation, invisible and all-powerful; one must sense him everywhere, but never see him”1. Anthony Mackey’s first solo exhibition accomplished this with consummate skill. His site-specific installation for GOMA employed various mediums and artistic methods to explore social issues of the marginalised community in which he lives and works. The mixed media installation – comprising drawings, printmaking and video – was presented across two gallery spaces, with local people being an integral element. No titles, details, pricelist, or descriptions of the artworks were offered; a wall text stating the artist’s name and the exhibition title provided the only acknowledgment of Mackey in the entire gallery.

The first room contained four framed pencil sketches of men, composed through dark, bold and loosely-formed marks. Written under each portrait was the sitter’s first name, as well as the date and time. Time is a measurement of value, as there is only so much of it available to us, thus Mackey established a sense of worth for his subjects. Occupying the full length and height of two large walls were mosaic-style wooden tiles, in varying hues of blue, red and yellow. Screen-printed onto the tiles were faces and local buildings, including a young girl, a Garda, an adolescent boy and a corner shop, portrayed with a blueprint quality. The surfaces of these tiles were partially peeled back, rendering the wood fibres visible and offering a derelict quality.

In the second room, four videos were installed on the wall, with more tiles forming frames around them. Taking up headphones, one heard a thickly accented voice, while watching footage of an anonymous hand drawing lines on paper. As a face was being formed – based on the portraits presented in the first space – the viewer heard a voiceover relaying the subject’s story. Tales of addiction, disillusion, unemployment and crime unfolded, highlighting the myriad issues often facing marginalised communities. Yet within these stories, there was shrewd commentary on various issues, such as: the manipulation of cheap labour by employment schemes; manual skills being lost to automation; and the economic impact of unemployment within communities. These seemed like the collected narratives of a culture that has developed various survival skills to exist within a system that does little to acknowledge social inequality; they offered forthright, sincere and occasionally humorous reflections on the subcultures that pulse through this nation.

The jewels of this exhibition were two drawings made on roughly torn paper that were pinned to the wall, as if floating in mid-air. The first depicted a male’s face and upper torso, while the second was a full-length sketch of two men. With no glass or frame creating a barrier between the viewer and the artwork, Mackey’s exquisite draughtsmanship was highly evident. These drawings contained no textual information about the subject, yet the range of emotion was so superbly executed that one felt as if their very souls would pour forth from the paper and drip down around one’s feet. They represented the dual ‘perspectives’ present within Mackey’s work – those of the socially-excluded or disenfranchised, and that of the strength in community, developed through familiarity, camaraderie and shared hardship.

There are similarities between Mackey’s drawings and the work of American photographer Walker Evans (1903–1975). Each artist captures people in their everyday environments, chronicling how government policies affect communities within a given period or nation. Like Evans, Mackey works in a sphere reticent with notions of realism and the spectator’s role. While Evans conveyed the character of communities by photographing architecture, billboards and shop displays, Mackey brings forth internal and emotional qualities through his skilful drawing. Using the poetic potential of plain fact, Mackey has created a body of work in which the artist’s role is deeply felt.

Susan Edwards is a writer based in County Wexford with a graduate degree in contemporary art theory.