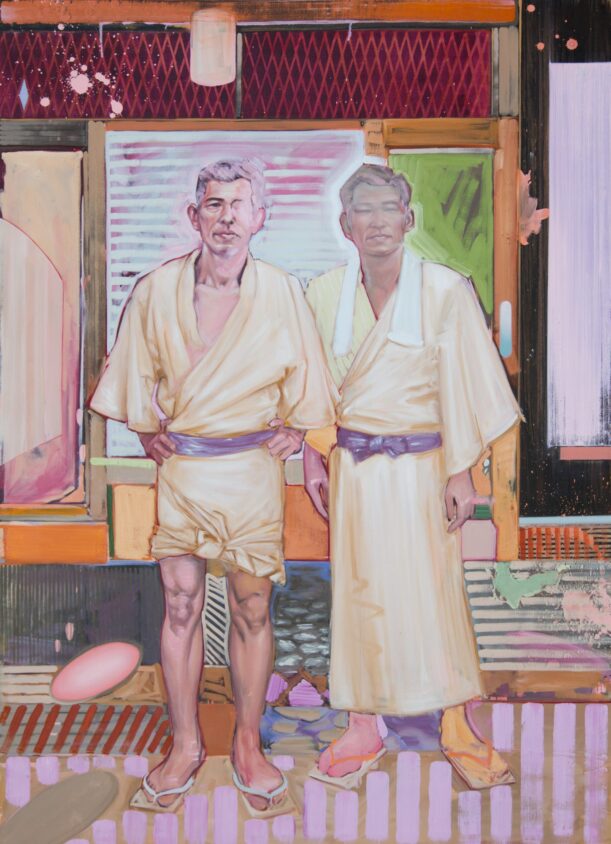 The title of Shane Berkery’s latest exhibition imparts little more than an implied focus on recent work, spotlighting where he is in his developing career through paintings that reflect his influences and interests. Dublin-based with Irish-Japanese parentage, Berkery eschews an overtly conceptual approach to his practice, and so may also be commenting on what contemporary art can be. The 11 canvases fall into two broad groupings, one with images of young ‘contemporary’ subjects, the other drawing on black and white photos relating to his Japanese heritage. Dating from the 1950s and ‘60s, these are characterised by informal poses and the clothing of the era, including kimonos and other traditional attire.

As such, the showing typifies a body of work concerned with the human figure, within which variations in style, content and scale lend a measure of unpredictability. Berkery transforms his source material through decisions made while painting about what to portray, modify or withhold. His signature approach uses non-naturalistic sepia tones, harmonious pastels and edgy pinks, yellows and blues. This distinctive repertoire unifies the work (despite its relative diversity) as does photo-real illusionism, variously mitigated by background-foreground interplays, painterly stripes, splotches, ellipses and lightly-stained, visible canvas weave.

Figure in the Dark introduces the Japanese strand. While Berkery often deploys monochrome within oscillating colour relationships, this study, unusually, features only tones of ‘black’ with burnt sienna accents. It captures a life-size male, mid-motion and mid-expression, his unstable stance heightened by the tilting wall behind him. This divides the plain background into subtly differentiated sections, a foil for skilled depictions of facial features and lived-in fabrics. Blank eyes meet ours as the subject’s thoughts turn inward and smoke furls up from his cigarette into the blackness. While Berkery strives to evoke a sense of realness and presence, interpersonal engagement is intriguingly elusive. The flip-flop wearing duo in Robes stare out from features masked by passages of paint; in The Bath, we are excluded from a father’s loving focus on his sleeping infant, who is submerged in sky-coloured water; and in Lunch in the Meadow, a youth glances out over our shoulder through cool, distracted eyes, immersed in his own closely-observed moment in time.

Among the ‘contemporary’ grouping, psychology overtakes nostalgia in Pensive, Wish You Were Here and Lime Light, all featuring male subjects. Their female counterparts in Lady and the Cherry Blossoms and Think of You display less emotionally-charged, ‘airbrushed’ perfection, their beauty conflated with that of the surrounding flowers. In the former, flawless features emerge from a flattened, decorative surface with overtones of anime and traditional Japanese prints, while in the latter, the subject’s hair is adjusted as her thoughts roam elsewhere.

The female in White Room wears rock boots and stands incongruously on a chair. Her head, leaning back, is framed by a hanging plant, its tendrils echoing the necklace that reaches down, like her hand, towards a gaping mini skirt. As an undisguised erotic image, the whiteness of the room could allude to purity or transcendence, while the wafting curtain recalls Venus nudes, revealed by a drawn-back drape. This work’s complex iconography reflects a contradictory culture that tends to view women as either sexualised or feminist. It is interesting, then, that the smaller Pensive, hung opposite, depicts a male withdrawing from view, his gaze shielded by his hand. Wearing only a trench coat, he is naked and exposed, the composition cropped just shy of his genitals.

The watery-eyed subject in the neighbouring Wish You Were Here cuts a grungy figure holding a toxic-pink amorphous skull with writhing forms that leap from his grasp, while an empty speech bubble underscores unspoken desolation and anger. Despite Berkery’s reluctance to read paintings like texts, there are notes in ‘Contemporary Paintings’ relating to love, sex, death, loss and gender representation – all themes reflective of humanity. It will be interesting to see, as he builds his oeuvre, if this artist’s clear talent and eclectic approach will continue to evolve these different pathways or coalesce in a unified, singular style.

Susan Campbell is a final-year PhD candidate at the University of Dublin, Trinity College.