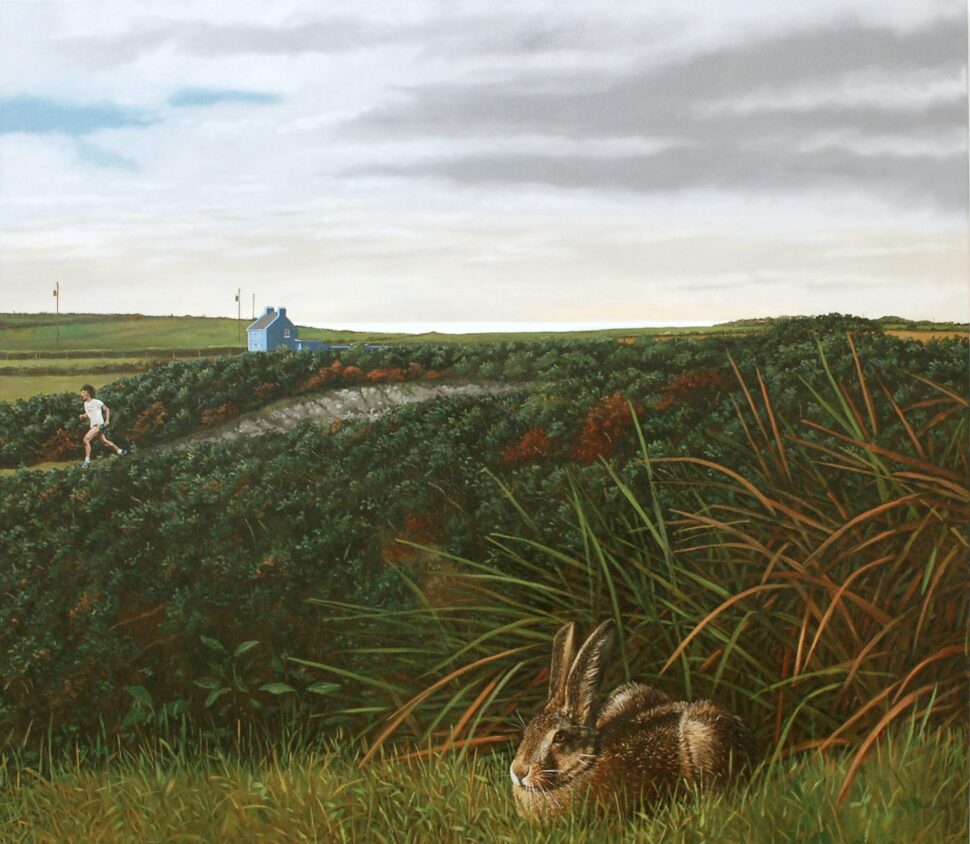 Martin Gale’s realist oil paintings, presented in his recent solo exhibition ‘Bloodlines’ at Taylor Galleries, bring to mind the work of masters of the American Realism genre, including Andrew Wyeth and Edward Hopper. Whilst Wyeth expressed a rural American splendour and Hopper depicted lonely urban dwellers of apartments and American diners, Gale’s paintings are distinctly Irish – resulting in singular visions of our own ‘wild west’ (though probably Kildare, where the artist lives). Minus Wyeth’s ethereality and doubling down on Hopper’s ominous isolation, Gale paints technicolour scenes reminiscent of The Quiet Man, minus the humour, suggesting Ireland, at moments, as perhaps No Country for Old Men.2

Born in 1949, Gale is a member of both Aosdána and the Royal Hibernian Academy, and has been exhibiting at Taylor Galleries since 1981, while his art is in many major public collections nationwide. Considering Gale’s career thus far, the paintings are formally perfect; one could not fault his application of oils. The real art, however, is in Gale’s framing – the back of a man’s head and body going somewhere fast, jacket flapping, in Short Step, or the foregrounding of a hare in Harrier, as a distant jogger passes – which creates odd angles and disquieting viewpoints. Unlike Wyeth’s dreamlike painting, Christina’s World (1948), which inspired the film Days of Heaven 2, Gale’s skies are cloudier and noir-esque, with a predominance of greens and greys, attributable to the Irish weather. Like Hopper’s paintings, it’s not Gale’s people or their stylings that are desolate or downcast, but the contexts in which they are placed and the spaces that encase them.

The men that populate these environs are mostly alone, coming towards or away from the viewer on puddled roads and laneways, journeying to do something, or having already done something – it is left to us to speculate as to what. The physical transience of these protagonists probes at the greater existential transience of us all. A couple of outstanding instances featuring lone women – The New Girl, displayed individually in an upstairs hall, and the politically timely The Appointment – are loaded with ambiguity, akin to Cindy Sherman’s staged photographic series, ‘Untitled Film Stills’ (1977–80). The works are realist, sure, but in a dramatised way. Everyday moments – waiting, walking, conceivably hesitating – are elevated, escalated, through Gale’s scenes. Due to a lack of subjective choices, we all see ourselves as the hero or antihero of our own reality. Gale’s paintings reflect this inner state, this spotlight that we, at times, imagine ourselves to be illuminated or imprisoned by. Technical illumination is certainly one of Gale’s skills. In Brighter Later, one of the smaller, unpopulated environs, light hits the horizon whilst the road ahead veers off course, suggesting much more than sundown – perhaps the end of the road in its entirety.

We hit a stumbling block when it comes to animals. The gallery’s press release highlights a focus on birds and animals, most notably horses, with the titular implication of an equine presence within the artist’s family history. While obviously bookending the premise of the exhibition, I found these animal paintings to be somewhat shoehorned in. They were not operating at the same level of nuance and complexity as the more peopled paintings. In conjunction with the human subjects, the presence of an animal or bird within a canvas seems totemic or eternal. Along with the aforementioned successful foregrounding of the hare in Harrier, a larger work titled One for Sorrow (which features a man facing a foreboding magpie) articulates the permanence of nature, while highlighting our own ephemerality.

The artist’s best works have an edge; a composition that is particular or peculiar, alluding to something – or, bone chillingly, to nothing – on the horizon. We read Gale’s human subjects as being laden with anxious landscapes. However, when depicted alone, his animals often lack the depth achieved in other works, where human presence can suggest a kind of finitude. In my view, Gale’s five watercolour studies were least successful – the artist’s dramatic edge quite literally watered down – and there were generally too many paintings on display – twenty-nine works spread over four rooms, halls, stairs and landings. Those that broke from the herd were indeed quite startling, suggesting that our twisting rural laneways are perhaps not as pastoral as they seem.

Lily Cahill is co-editor of Critical Bastards Magazine based in Dublin.