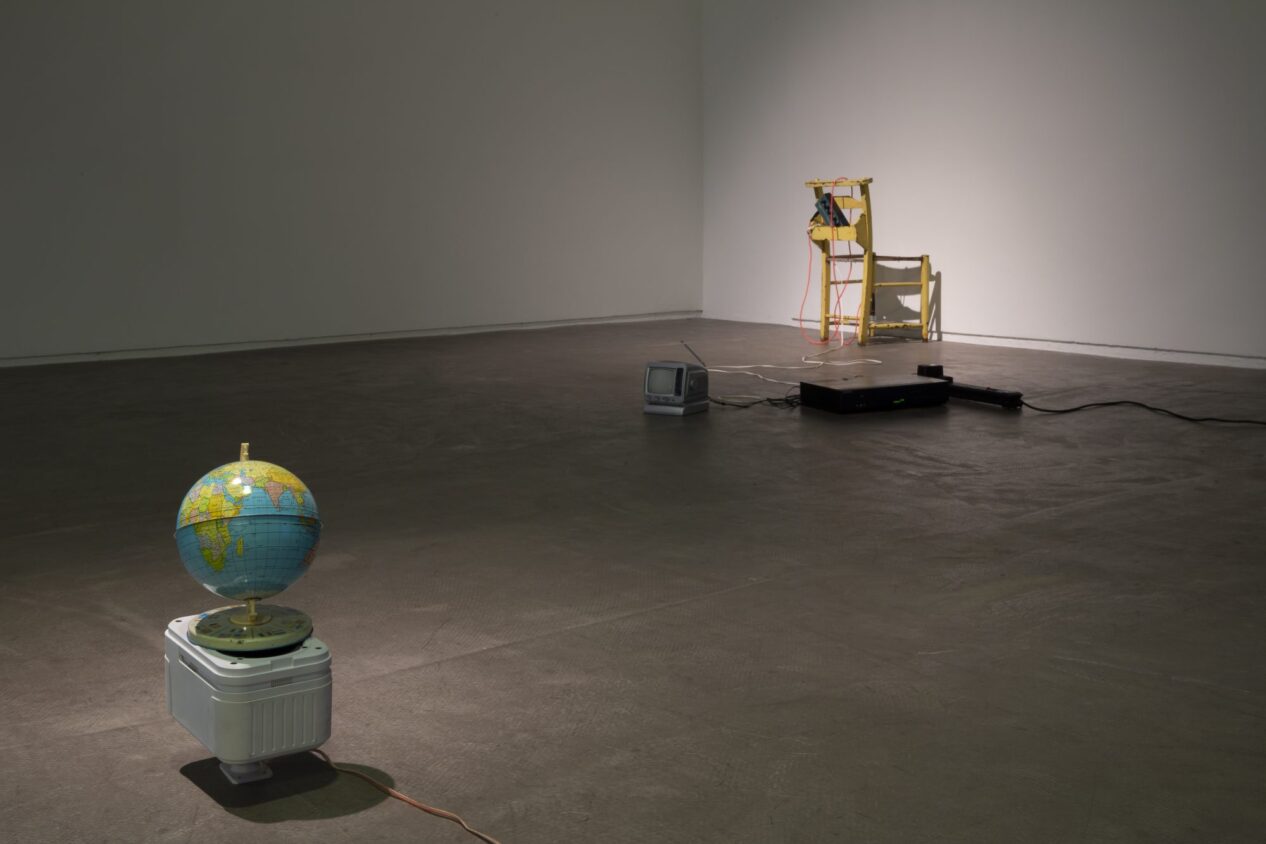 Shot on a Hi8 video camera in Seamus Harahan’s familiar, bare-bones style, the film at the heart of this exhibition is presented as an episodic, fragmented documentary, displayed across an array of antique monitors and makeshift screens. With a miscellany of other objects scattered around the gallery space – an old paperback of Knut Hamsun’s Hunger, an enamelled teapot, a Sleaford Mods record – the ramshackle installation feels a little like a car-boot sale. Fancier notes are provided by a copy of a famous tapestry, which functions as a kind of backdrop and a single Eames aluminium chair.1 Less fancy chairs stand loitering alone, or in groups, as though waiting for the action to begin. Without a conventional timeline, the film unfolds spatially. As images and sounds come fitfully to life, the visitor is prompted to move around the gallery, catching glimpses of a culture, “too spectral and hidden”, to be examined from only one point of view.2

When I visited the gallery, Irish Traveller and singer, Thomas McCarthy, told me how, after a night of singing and story-telling, Travellers would sometimes wake up to find that the locals had hidden their horses, effectively trapping them so that the entertainment could continue. A co-author and principal subject of this newly commissioned work, McCarthy seems alive to the ironies of a culture that is both valued and disrespected within Irish society. In their different ways, the traditional singer and the filmmaker are already engaged with the documentation of disappearing worlds. Working together, they have fashioned – from their mutual ‘comfort and joy’ – an exhibition that resists the elegiac, in favour of something far more contrary and awkward. The exhibition’s subtitle suggests the contrary nature of an indigenous culture finding itself ‘other’. The film documents a form of folk music, but the implied universality of that term is also contradicted by how many Traveller songs remain relatively private – singing about events you’re not directly connected to is considered inauthentic, or worse. McCarthy learned many of his songs from his mother, who also encouraged him to develop his distinctive “warble” (or vibrato, for the more classically-minded). The extended notes and pitch variations produced by this technique also influenced the pipers in their family. None of this is directly referred to in the film-footage (which, in another anachronistic move, is actually VHS tape). Instead, we see a series of performances by McCarthy and others, in locations that include: the Willie Clancy Summer School in County Clare; the interior of a windy tent; and an unidentified Dublin squat. Despite the fragmented nature of the overall work, each performance is shown in its entirety. The camera drifts and zooms, but there is little or no editing; the primacy of the captured moment is what counts.

In some of Harahan’s earlier films (not included in this exhibition) – Holylands (2003), for example, or in the ongoing series ‘Cold Open’ – fugitive moments from everyday scenes are overlain with appropriated musical soundtracks. At first, the choice of music can seem incongruous, but the combinations are always brilliantly effective. Harahan tends to shoot unobtrusively, his subjects often unaware they’re being filmed. As a viewer you are drawn into an uneasy alliance with the camera’s clandestine presence. In this new work, the subject is onboard from the start, the music and filming evolving together. The unconventional structure and gallery set-up may be a response to this, with these tensions becoming more formally integrated and more actively experienced by the viewer.

McCarthy also told me how the arrival of battery-powered generators allowed Travellers to watch television at home for the first time. As younger family members sat silently watching the screen, he remembers his father being appalled by this new “conversation killer”. There may be an irony in an oral culture now being extended through the technology that helped cause it to diminish, but Harahan’s choice of largely outmoded recording and display equipment lends the exhibition its own sense of vulnerability. McCarthy’s father – himself a well-known seanachí – might have chuckled to himself, when a nearby screen came spluttering back to life and my chat with his son came to an end. The conversation killer had started up again.

John Graham is an artist who lives in Dublin. He teaches Fine Art at Sligo Institute of Technology.

Notes
1 The exhibition features a replica of The Unicorn in Captivity (from The Unicorn Tapestries), (1495 – 1505), currently at the Metropolitan Museum of Art, New York.
2 Seamus Harahan exhibition text.

Image Credits
‘my comfort and my joy: Songs from the Irish Other’, Seamus Harahan and Thomas McCarthy, 2018, installation view, Douglas Hyde Gallery; photographs by Kate O’Brien.