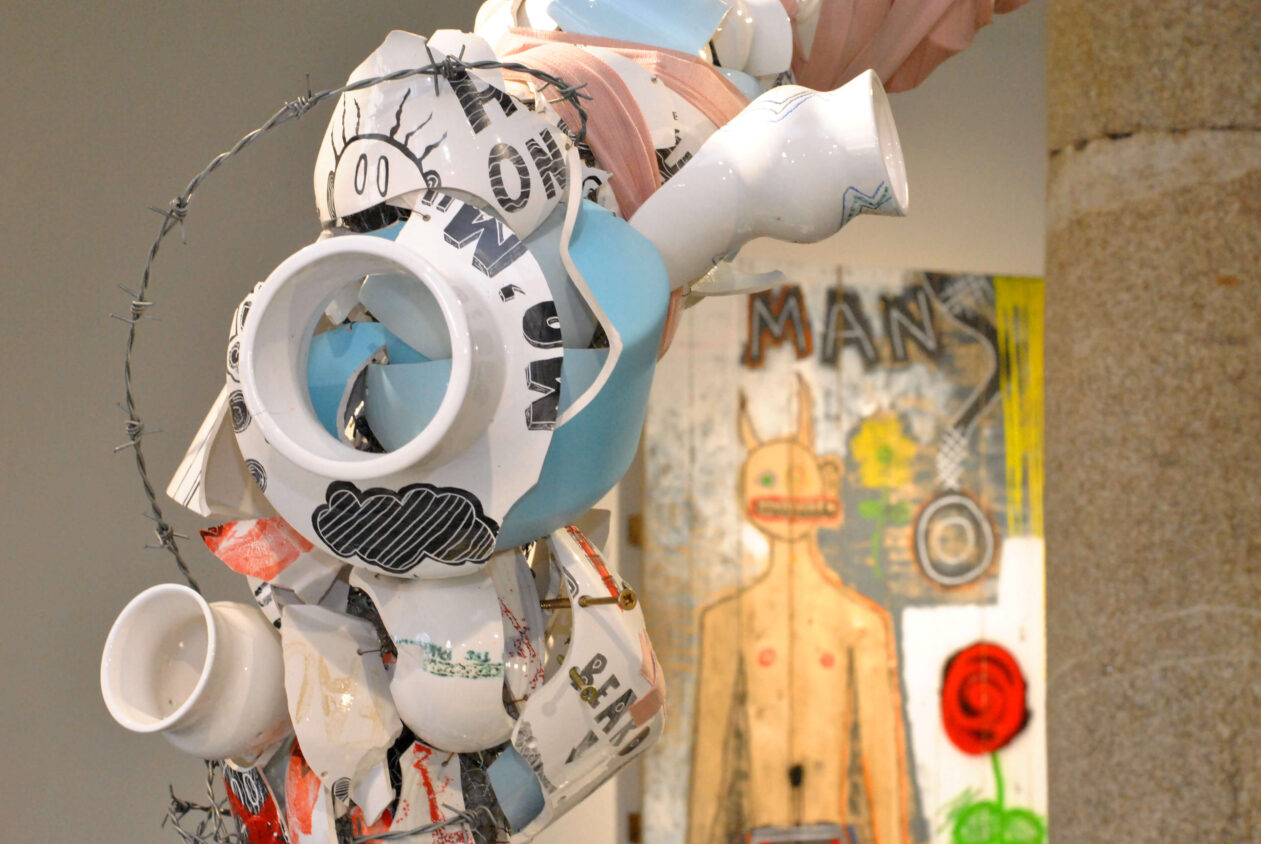 Wexford-born emerging artist, Shane Keeling, recently graduated from the National College of Art & Design with an honours degree in Glass & Ceramics. As recipient of NCAD’s 2018 Ceramic Residency, Keeling has developed a new body of mixed-media works which aims to generate dialogue on mental health, suicide and the stigma surrounding these conversations. Curated by Lisa Byrne, Keeling’s solo exhibition at Wexford Arts Centre is not just about the art – the artworks presented are certainly not unremarkable, but perhaps more importantly, they provide a vehicle to explore the artist’s very timely concerns.

Through the material processes of making, breaking, mending and remaking ceramic pots, Keeling seeks to initiate dialogue on the fragility of the human condition. Where many topical issues strive to be gender-neutral, Keeling has boldly chosen to represent a distinctly masculine thematic inquiry. The artist wants people to question why there are such negative connotations around mental health, particularly for men. This body of work is the fulfilment of his efforts to question why men seem to have labels of ‘dishonour’ attributed to them, with suggestions that they are “not man enough”, or that they should “man up”, whenever their mental health might become vulnerable.

Combining elements of ceramics, sculpture and painting, ‘BAD-MAN Oh Man’ features a series of wall-mounted mixed-media works, as well as several sculptural assemblages, presented on low plinths. A number of individual clay vessels and found objects also hang grimly from the ceiling, on thick black nooses. These images of isolation are contrasted with the mass confusion found in the central mixed-media sculpture, titled Man Oh Man. Here, the jagged pieces of broken ceramic pots have been combined to form a tall curving structure, calling to mind the shape of a question mark. Infused with barbed wire (that warns viewers not to get too close), this manifestation of ‘brokenness’ suggests internal conflict and perpetual suffering.

Using the sgraffito technique, Keeling has etched into the surfaces of many of the artworks. Derived from the Italian word, graffiare (meaning ‘to scratch’), sgraffito is a decorative method which involves scratching through a surface to reveal a lower layer of a contrasting colour. In Keeling’s ceramic pieces, the surface has been scraped away to reveal Pop Art-style text and illustrations, calling to mind Grayson Perry’s ceramic vessels, such as The Existential Void (2012). These designs add an element of lightness and humour to the work – a satirical voice that highlights the futility of cutting off emotional contact with other people. Keeling’s use of the technique can also be interpreted as a metaphor for looking beyond a person’s happy façade, to see the sadness that often lingers just below the surface.

The British potter, Edmund de Waal, feels that ceramics are unlike any other artform. As humans, we know ceramics intimately; we handle them every day in our domestic lives, and they form the centre of our rituals. They are a constant and often ignored presence in our day-to-day existence. When you hold a piece of pottery in your hands, the story of its making begins to unfold. One thinks of the fact that few pots emerge from the kiln in perfect condition. Even if they seem flawless, there is no way of telling how they hold up to wear and tear – their strength is yet to be tested. Many seemingly flawed pots, with their uneven glazing, blisters and mending, have completeness and added value. A broken tea cup may no longer hold liquid, but could have a different purpose, such as holding coins or bits of jewellery.

The process of harnessing the four primitive elements of the universe – fire, air, water and earth – and transforming them into something else, is both awe inspiring and magical. Keeling’s skill in ceramics is a reminder of the dramatic and transformative properties of clay. Through his use of broken and mended pots, he offers a small glimmer of hope of this same transformative power within all of us. Being broken is no badge of shame; rather it is instead a shining example of human capacity to endure, develop and change.

Susan Edwards is a writer based in County Wexford and PhD candidate at NCAD.